Carlton North is a suburb in Melbourne, Victoria, Australia, 4 km north from Melbourne's central business district. Its Local Government Area are the Cities of Melbourne and Yarra. At the 2006 Census, Carlton North had a population of 6090.

Its main commercial area is along Rathdowne Street which has numerous cafés, restaurants, small fashion boutiques, bookshops and other businesses.

Carlton North has its origins with the allotment of the Melbourne General Cemetery in 1853. Previous cemetery sites at Flagstaff Gardens and (what is now) Queen Victoria Market, had become full, thus the new Carlton North site was established. In the same year a prison stockade, Collingwood Stockade, was built on Lee Street. This subsequently became an asylum, until 1873 when it became the area's first primary school. A bluestone quarry was established at what is now Curtain Square. Subdivision into residential blocks began in 1869, with the emerging brick terrace houses standing in contrast to Carlton's timber cottages. Princes Park was established in 1844 and became home to the Carlton Football Club in 1864.

Tram lines were installed along Lygon Street, Rathdowne Street (dismantled in 1936), and Nicholson Street. The area was also serviced by the Inner Circle railway line (passenger services were ceased in 1948 although it remained a goods line until 1980).

The main commercial precincts in Carlton North are the strip on Rathdowne Street (called 'Rathdowne Village') and the northern end of Nicholson Street. The most notable businesses in the area include the original La Porchetta pizza restaurant (which has since become an Australia and New Zealand-wide franchise) and the Natural Tucker bakery.

In 2010 St Michael's Anglican Church celebrated its 125th anniversary. Carlton North also has one of the oldest Masjids (Mosque) in Melbourne. Originally built by Albanian migrants, it is attended by Muslims during the 5 daily obligatory prayer sessions.

Carlton North has a large amount of Victorian and Edwardian era attached and semi-detached terrace houses. 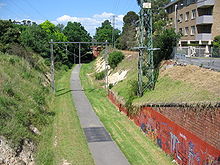 The suburb is serviced by the main roads of Royal Parade, Lygon Street, Princes Street, Rathdowne Street and Nicholson Street.

The local railway station was closed to passengers in 1948 and freight in the early 1980's. Part of the former line was conversationally utilised for Housing Commission units for the elderly and part was turned into a rather long and narrow park. Carlton North also has significant segregated bicycle facilities including the Capital City Trail. The Carlton North section is a converted rail trail.

Melbourne General Cemetery is a large (43 hectare) necropolis which is notable for the graves of four Australian Prime Ministers: James Scullin, Sir Robert Menzies, Harold Holt and Sir John Gorton.[2] Holt's stone is a memorial as his body was never recovered after he disappeared at sea. The tomb of famous Australian explorers Robert O'Hara Burke and William John Wills (see Burke and Wills expedition) is also located in the cemetery, with an inscription reading "Comrades in a great achievement and companions in death."