Saitō Dōsan
In this Japanese name, the family name is "Saitō".

Saitō Dōsan (斎藤 道三?, 1494 – May 28, 1556) was a daimyo who dramatically rose and also fell from power in Sengoku period Japan. He was also known as the Serpent of Mino (美濃の蝮, Mino no Mamushi?) for his ruthless tactics.

He used his power and influence to become a retainer of the daimyo of Mino, Toki Yorinari.[1]

Dōsan contributed to general instability within Mino Province, so Yorinari gave him his concubine in the hopes that this would appease him in 1526.[2]

He later married Ômi no kata, a daughter of Akechi Suruga no kami Mitsutsugu.

He eventually succeeded in becoming the magistrate of Mino Province and settled in Inabayama Castle.[3] Using his power and wealth, he drove Toki Yorinari out of Mino Province in a coup d'état in 1542, and claimed the region as his own, becoming a daimyo in his own right. Afterwards, Toki Yorinari allied with Oda Nobuhide of Owari Province, which was on the southern border of Mino Province, but their defeat at the Battle of Kanōguchi, in 1547, solidified Dōsan's domination of Mino and also made him known throughout Japan. Oda Nobuhide made peace and arranged a political marriage in 1549, between his son, Oda Nobunaga, and Dōsan's daughter, Nōhime, to end all hostilities. 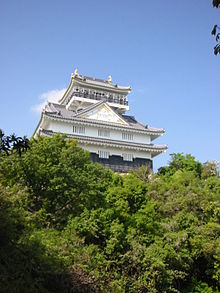 Ironically, Saitō Dōsan fell in his own son Saitō Yoshitatsu's coup d'état in 1556.

Around 1555, rumors began to circulate that Saitō Yoshitatsu was not in fact Dōsan's son; it was said that he was Yorinari's. It does not appear that Yoshitatsu had been aware of that possibility himself until he heard the rumors.[citation needed]

The circumstances surrounding this are unclear, however. One belief is that Dōsan, having had a number of sons after Yoshitatsu, had decided to name one of them heir (despite having officially retired by this point in favor of Yoshitatsu). Another theory holds that Yoshitatsu simply assumed that he would be disinherited, and decided to move first.[citation needed] A further idea is that Saitō Yoshitatsu just elected to usurp his father's power.

Relations at any rate quickly soured between Yoshitatsu and Dōsan, leading up to the Battle of Nagaragawa, where Dōsan was heavily outnumbered.

In desperation, Toshimasa is alleged to have named Nobunaga as lord of Mino in his will and sent this document to Nobunaga. Nobunaga, however, was unable to provide help.

Dōsan was defeated and his head was taken by a certain Komaki Genta, a retainer of Yoshitatsu's son Tatsuoki. His remains were originally interred in Sōfuku-ji, but they were later moved to Jōzai-ji because the Nagara River kept overflowing and covering his burial mound.[4] Both temples are located in Gifu.