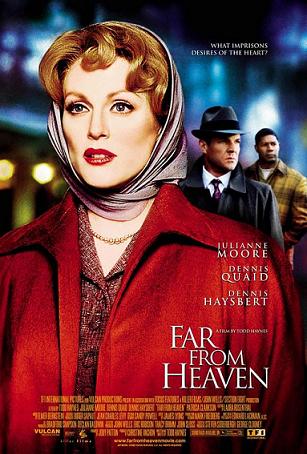 The film tells the story of Cathy Whitaker, a 1950s housewife, living in suburban as she sees her seemingly perfect life begin to fall apart. It is done in the style of a 1950s, film (especially "" and ""), dealing with complex contemporary issues such as race, sexuality and class.

Set in an 1950s , the film is about Cathy Whitaker (Moore), the perfect wife, mother, and . Cathy is married to Frank (Quaid), a successful executive at Magnatech. The film begins with Cathy preparing for her annual party with her best friend, Eleanor Fine (Clarkson). One day, Cathy spies an unknown black man walking through her garden. He turns out to be Raymond Deagon (Haysbert), the son of Cathy's late gardener.

Frank is soon being forced to stay late at the office, swamped with work. One evening, however, we see him enter a gay bar. Meanwhile, Cathy and Raymond develop a friendship. On one particular night, when Frank is working late, Cathy decides to wrap up his dinner and take it to him. She walks in on him passionately kissing another man. Frank confesses having had "problems" as a young man, and agrees to see Dr. Bowman () in the hope of being "converted back" to . His relationship with Cathy is irreparably strained, however, and he turns to alcohol. Unable to comprehend the destruction of her marriage, Cathy turns to Raymond for comfort. She sees him at an art show, where she spends much of her day talking to him, setting the town ablaze with gossip.

As Cathy sees her once idyllic world falling apart, she begins to fall in love with Raymond, and their evident relationship has unpleasant consequences for him and his daughter. At the same time, Frank, unable to suppress his desires, falls in love with another man and seeks a from Cathy.

"Far from Heaven" is made entirely in the style of many '50s films, notably those of . Haynes created color pallettes for every scene in the film and was very careful and particular in his choices. Haynes emphasizes experience with color, in such scenes as one in which Cathy, Eleanor, and their friends are all dressed in reds, oranges, yellows, browns, and greens. Haynes also plays with the color green, using it to light forbidden and mysterious scenes. He employs this effect both in the scene where Frank visits the gay bar and when Cathy goes to the restaurant in the black part of town.

Haynes also uses shots and angles that would have been standard in Sirk's films and era. Cinematographer created the 1950s "look" with the same type of lighting equipment (incandescent), lighting techniques, and lens filters that would have been used in a 1950s-era melodrama. The script employs over-the-top, dialogue, and Elmer Bernstein's score is reminiscent of those he had composed 40 and 50 years earlier.

In the commentary, Haynes was also influenced by 's film "". Like Fassbinder's film, Haynes portrays feelings of alienation and awkwardness. For example, instead of cutting to the next scene, Haynes would linger on a character for a few seconds longer than comfortable to the viewer, just like the technique Fassbinder used. Also, there are a few scenes which are an obvious homage to "Ali" like the scene where Cathy and Raymond are dancing at a Black diner (in which Cathy feels very awkward) and the line "You're beautiful" is also a direct homage to "Ali".

National Board of Review