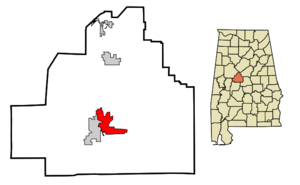 mapsize = 250px
map_caption = Location in Bibb County and the state of

There were 953 households out of which 31.7% had children under the age of 18 living with them, 52.3% were married couples living together, 15.4% had a female householder with no husband present, and 28.2% were non-families. 26.3% of all households were made up of individuals and 15.0% had someone living alone who was 65 years of age or older. The average household size was 2.48 and the average family size was 2.98.

*A White woman by the name of Mrs. Crow gave birth to a child of “doubtful color” that was thought by many to be the product of a relationship between Mrs. Crow and an African American, and she was accused of having such a relationship. At first she vigorously denied it, but then – under intense peer pressure – she confessed as to baby’s origin, but claimed that she had been raped. When asked if she knew who raped her, Mrs. Crow gave them the name of , an African American who lived near the , which is northeast of Centerville, and about five Miles from what today is , but was then known as .

*The miners and other local residents were so incensed at the affair that they decided to apply “Summary Vengeance” to Mr. Richardson as soon as they knew that the Sheriff had apprehended him.

*Deputy Sheriff soon apprehended Mr. Richardson, and was returning him to the jail at Centerville for processing and trial, but they were waylaid enroute by a lynch mob who relieved Deputy Riley of Mr. Robinson.

*Mr. Robinson was lined up, and shot in a fusillade by the mob.

*Chief Deputy Sherriff Charles Oakley investigated the scene as soon as word of the incident reached him, but – other than the body, the shells, and the blood, there was very little of what was recognized as evidence in 1910 to be found, much less witnesses. A Coroner’s Inquest was held as soon as a special Coroner was appointed, but there is no known result of that inquest. This was the first recorded Lynching to take place in .

*It is unknown if charges of either filing false charges resulting in a or were filed against Mrs. Crow, but it is known by those aware of Mr. Richardson that he had lived in Blocton, Alabama for a number of years with a fair reputation prior to the incident. [Montgomery "Advertiser"; ; "Angry Miners Lynch Negro"] .