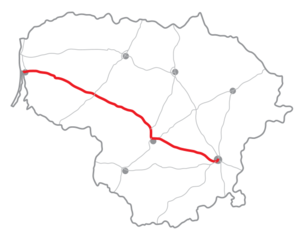 
The A1 Highway in connects the city of with the of , via the second largest city, . Its length is over 300 kilometers, making it the longest highway in Lithuania. Vilnius-Kaunas part was completed in 1970 and officially opened as a complete road in . Kaunas-Klaipėda part was completed in , and opened as a whole for vehicular traffic on of that year.Fact|date=September 2007 It replaced first 40 kilometers of Samogitian Highway stretching from Kaunas.

The A1 Highway has 4 lanes - two lanes each way, separated by grass line and a safety rails. Its code is E85 and for a short while E28.