Route 37 is a state highway located in Ocean County, New Jersey, United States. The route runs 13.43 mi (21.61 km) from Lakehurst at an intersection with Route 70 to an interchange with Route 35 in Seaside Heights. A four– to six–lane divided highway its entire length, Route 37 serves as the major east–west route through the Toms River area as well as a main route to the Barnegat Peninsula, crossing the Barnegat Bay on the Thomas A. Mathis and J. Stanley Tunney Bridges. The route through Toms River Township is lined with many businesses and named Little League World Champions Boulevard in honor of Toms River East Little League's victory in the 1998 Little League World Series. Route 37 intersects many major roads in the Toms River area, including County Route 527, the Garden State Parkway/U.S. Route 9, Route 166, County Route 549, and County Route 571. The route experiences congestion from both development in the area and from traffic bound for the barrier islands in the summer.

Route 37 was first legislated in 1927 in two sections: one running from Trenton to White Horse along the current U.S. Route 206 alignment that replaced part of Pre-1927 Route 2 and the other running from Lakehurst to Point Pleasant that replaced part of Pre-1927 Route 18 between Lakehurst and Toms River. In 1953, Route 37 was legislated along its current alignment, with the designation dropped on the Trenton–White Horse segment to avoid the concurrency with U.S. Route 206 and the Seaside Heights–Point Pleasant section becoming a realignment of Route 35. Route 37 was then proposed in the 1960s as a freeway running from White Horse to Seaside Heights. This freeway proposal was eventually altered to create Interstate 195, running from Trenton to Wall Township.

Route 37 begins at the Lakehurst Circle intersection with Route 70 in Lakehurst, heading east on a four–lane divided highway. Soon after beginning, the route crosses into Manchester Township .[1] It intersects Commonwealth Boulevard, which provides access to the Leisure Village West-Pine Lake Park community, before crossing into Toms River Township.[1][2] Route 37 continues east with many intersections that feature jughandles and at the intersection with Industrial Way, the road widens to six lanes.[1] Route 37 passes to the north of Holiday City - Silver Ridge Park, an age-restricted community which contributes to the large population of senior residents in the area.[1][2] The route meets County Route 642 (Mule Road) and County Route 527 (Oak Ridge Parkway/Lakehurst Road). After the intersection with County Route 527, the route crosses over the North Branch of the Toms River.[1] 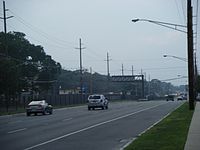 Due to the area's vacationers, many of which come from New York and Northern New Jersey, Route 37 is routinely congested with seasonal traffic in the summer, especially on and around the Mathis and Tunney Bridges and at the Garden State Parkway interchange as heavy tourist traffic converges on the shore.[3] Additionally, the road sees congestion due to the area's rapid growth in commercial development.[4] 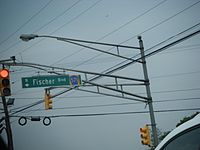 Prior to 1927, the route between present-day Route 70 in Lakehurst and present-day County Route 527 in Toms River was a part of Pre-1927 Route 18, which was legislated in 1923 to run from Camden to Toms River.[5] In the 1927 New Jersey state highway renumbering, Route 37 was legislated to run from Route 27 and Route 30 (now U.S. Route 1 Business, U.S. Route 206, and Route 31) in Trenton to Route 35 (now Route 88) in Point Pleasant, passing through White Horse, Allentown, Lakehurst, Toms River, and Seaside Heights.[6][7] The portion between Trenton and White Horse replaced part of Pre-1927 Route 2, while the portion between Lakehurst and Toms River replaced part of Pre-1927 Route 18.[8][5]

Following the 1927 renumbering, Route 37 existed in two separate sections, one running from downtown Trenton to the White Horse Circle, concurrent with U.S. Route 206, and one running from Route 40 (now Route 70) in Lakehurst to Point Pleasant. The remainder of the route between White Horse and Lakehurst remained incomplete.[9] There are, as of mid-2008, a few old concrete bridges dating from the 1930s and 1940s between the White Horse Circle and Allentown, which list sections of what is now County Route 524 as having been Route 37 at that time, as well as one or two along County Route 539 south of Allentown.[10] In addition, some maps labeled these routes as being part of Route 37.[9][11] In the 1953 New Jersey state highway renumbering, Route 37 was legislated to run along its current alignment from Route 70 in Lakehurst to Route 35 in Seaside Heights. The number was dropped between Trenton and White Horse in favor of U.S. Route 206, while the section between Seaside Heights and Point Pleasant became a realignment of Route 35.[12]

Route 37 was proposed in the late 1960s as a freeway that was to run from Route 29 in the Trenton area to Seaside Heights.[13] It was suggested that this freeway be completed by 1975 in order to handle a rapid growth of population in Central New Jersey. In 1968, this proposal was altered to build a road that compromised with the proposed Route 38 freeway between Camden and Wall Township. It soon received federal funding and was built as Interstate 195, running from Trenton to Wall Township.[13]

The entire route is in Ocean County.