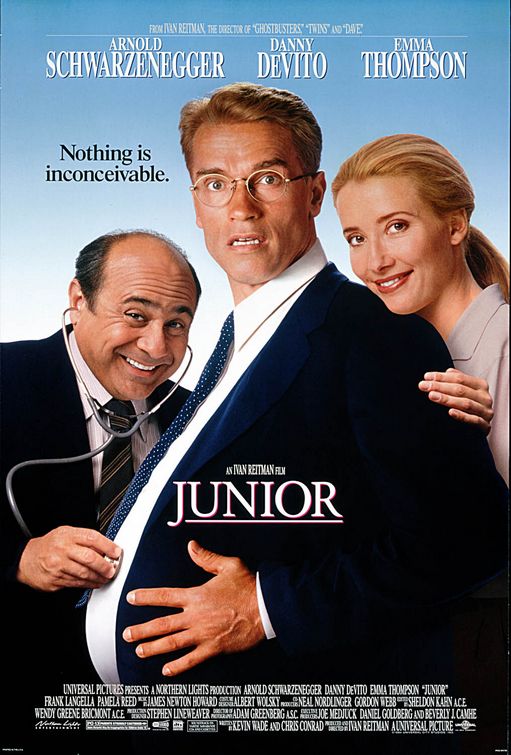 "Junior" features Schwarzenegger as Alex Hesse, one member of a team of scientists (himself and Dr. Larry Arbogast, played by DeVito) who have invented a new super-, "Expectane", which will reduce the chances of a woman's body rejecting an and thus causing a .

When their research funding is withdrawn, and human experimentation is denied to them, they decide to pull a publicity stunt&mdash; an egg is taken from the cryogenics department, anonymously donated by the scientist who they share a lab with, Dr. Diana Reddin (), fertilized with Alex's sperm, and finally placed in Alex's abdominal cavity, after which he is heavily dosed with Expectane, and estrogen.

The main plot and the humor is then based on Alex undergoing the physical and emotional changes of pregnancy.

The experiment is only supposed to last for 3 months until they have the data they need to get sponsored by a Canadian institution, but Alex has a change of mind as he realizes this pregnancy is exactly what he needs to get out of the shell of he has always surrounded himself with, and actually goes through with the whole . While Alex is pregnant, Larry has to hide him from the media and from the members of the university that used to fund their research, as all results of the research (i.e. the baby) are university property. Eventually, Noah Banes (), a previous colleague of Alex and Larry, finds out about the baby and is ready to have Alex locked up until the end of the pregnancy, but with Larry's help Alex manages to escape. He leaves the city and hides out at a home for expecting mothers (disguised as a woman).

Later Alex gives birth caesarean and keeps the baby. The baby is a girl who gets the name Junior.

There is also a romantic side plot about Diana falling in love with him, before finding out that Alex is pregnant and that they used her egg to impregnate him, then getting upset with the whole situation, before she goes to Alex and tells him that it doesn't matter if he is the pregnant one; she is still the mother, and he is still the father. Alex agrees with her, and the two reconcile, shortly before Junior is born. At the end of the movie, they are married and Diana is pregnant with their second child.

Another part of the plot is Larry's ex-wife, Angela's (played by ) getting pregnant with another man (it's revealed to be the personal trainer of the band , but that's not made known until late in the movie, while Larry assumes, with humorous results, that it's an actual member of the band) so soon after the , which was mainly caused by the fact that Larry couldn't get her pregnant in the first place. At the end of the movie, Larry delivers his ex-wife's child, and the two of them reconcile and raise the baby boy (Jake) together.

For the most part, the film received poor reviews, having a 34 % "Rotten" rating on . [http://www.rottentomatoes.com/m/1058426-junior/?critic=columns] Many critics cited that it was a one-joke film, and otherwise didn't hold much weight. Comedian and former "" host named the film the second-worst comedy ever made. [cite web |url=http://www.cracked.com/index.php?name=News&sid=1681 |title=Inoperable Humor: The 5 Worst Comedies of All Time |accessdate=2007-03-26 |last=Nelson |first=Michael J. |authorlink= |coauthors= |date= |year= |month= |format= |work= |publisher= |pages= |language= |archiveurl= |archivedate= |quote= ]

Notably however, was a fan of the movie, giving it 3 1/2 out of four stars and maintaining that:

I know this sounds odd, but Schwarzenegger is perfect for the role. Observe his acting carefully in 'Junior,' and you'll see skills that many 'serious' actors could only envy." [http://rogerebert.suntimes.com/apps/pbcs.dll/article?AID=/19941123/REVIEWS/411230303/1023]

Ebert and his partner gave the movie "two thumbs up" on their tv show.

The film grossed only a little more than half its budget ($60 million), making only $36 million domestically. [http://www.boxofficemojo.com/movies/?id=junior.htm]