In various Hindu traditions, Manu is a title accorded to the progenitor of mankind, and also the very first brahman king to rule this earth, who saved mankind from the universal flood. He was absolutely honest which was why he was initially known as "Satyavrata" (One with the oath of truth). His wife is Shraddha(niharika).

Mahabharata says: "And Manu was imbued with great wisdom and devoted to virtue. And he became the progenitor of a line. And in Manu's race have been born all human beings, who have, therefore, been called Manavas. And it is of Manu that all men including Brahmanas, Kshatriyas, and others have been descended, and are, therefore, all called Manavas. Subsequently, O monarch, the Brahmanas became united with the Kshatriyas. And those sons of Manu that were Brahmanas devoted themselves to the study of the Vedas. "The ten sons of Manu are known as Vena, Dhrishnu, Narishyan, Nabhaga, Ikshvaku, Karusha, Saryati, the eighth, a daughter named Ila, Prishadhru the ninth, and Nabhagarishta, the tenth. They all betook themselves to the practices of Kshatriyas. Besides these, Manu had fifty other sons on Earth. But we heard that they all perished, quarrelling with one another."[1]

Each Manu rules during an eon called a Manvantara. The Puranas ascribe to each Manvantara one Indra, one Vishnu avatar, etc.[2] "During the hundred years of Brahmā's life, there are 504,000 manvantara–avatars"(Śrī Caitanya Caritāmṛta Madhya 20.322)[3] 15 Manus of the present Śveta Vārāha Kalpa are

According to the Puranas, currently we are in the 7th Manvantara headed by Sraddhadeva (Vaivasvata) Manu.

Bhaktisiddhanta Sarasvati Thakura, in his Anubhashya, gives a list of Manus and their fathers' names:

The genealogy of Svayambhuva Manu

According to the Puranas, the genealogy of the 1st Manu, Svayambhuva is as follows:

The genealogy of Vaivasvata Manu

According to the Puranas, the genealogy of the 7th Manu, Vaivasvata is as follows:

Vaivasvata Manu and the Matsya Avatara 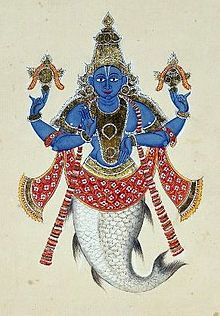 The Matsya Avatar of Vishnu is believed to have appeared initially as a Shaphari (a small carp) to King Manu (whose original name was Satyavrata[7]), the then King of Dravidadesa, while he washed his hands in a river. This river was supposed to have been flowing down the Malaya Mountains in his land of Dravida. The little Fish asked the king to save Him, and out of compassion, he put it in a water jar. It kept growing bigger and bigger until King Manu first put Him in a bigger pitcher, and then deposited Him in a well. When the well also proved insufficient for the ever-growing Fish the King placed Him in a tank. As it grew further King Manu had to put the fish in a river, and when even the river proved insufficient he placed it in the ocean, after which it nearly filled the vast expanse of the great ocean. It was then that He (Lord Matsya) informed the King of a deluge which would be coming very soon.[7][8][9][10] The King built a huge boat which housed his family, 9 types of seeds, and animals to repopulate the earth, after the deluge would end and the oceans and seas would recede. At the time of deluge, Vishnu appeared as a horned fish and Shesha appeared as a rope, with which Vaivasvata Manu fastened the boat to horn of the fish.[11]

According to the Matsya Purana, his boat was perched after the deluge on the top of the Malaya Mountains[7][8][9] This narrative is to an extent similar to other deluge stories, like those of Gilgamesh from ancient Sumerian Mythology, and the story of Noah's ark from Judeo-Christianity.

Duration of life of Manu

According to tradition, Manava Grihyasutra, Manava Sulbasutra and Manava Dharmashastra (Manusmriti or rule's of Manu) texts are ascribed to Sayambhuva Manu. Manusmriti is considered by some Hindus to be the law laid down for Hindus and is seen as the most important and earliest metrical work of the Dharmaśāstra textual tradition of Hinduism.[14] At the same time it is a Smriti, so whenever there is a conflict between what is mentioned in it and that mentioned in sruti (Vedas and Upanishads) the latter is considered to be correct as it holds higher spiritual authority.

In Theosophy, the "Vaivasvatu Manu" is one of the most important beings at the highest levels of Initiation of the Masters of the Ancient Wisdom, along with Sanat Kumara, Gautama Buddha, Maitreya, the Maha Chohan, and Djwal Khul. According to Theosophy, each root race has its own Manu which physically incarnates in an advanced body of an individual of the old root race and physically progenerates with a suitable female partner the first individuals of the new root race.

In the Victor Hugo novel, The Hunchback of Notre Dame, Claude Frollo is seen to be studying Manu's works in his study of alchemy.