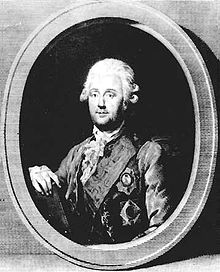 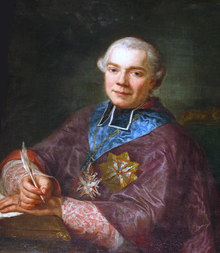 Bishop of Vilnius, Ignacy Massalski, first chairman of the Commission of National Education, removed from this function in 1776 because of financial malversations in Lithuanian schools, lather one of the leading members of Targowica Confederation

The Commission of National Education (Polish: Komisja Edukacji Narodowej, abbreviated KEN, Lithuanian: Edukacinė komisija) was the central educational authority in the Polish-Lithuanian Commonwealth, created by the Sejm and king Stanisław August Poniatowski on October 14, 1773. Because of its vast authority and autonomy, it is considered the first Ministry of Education in history and an important achievement of the Polish Enlightenment.[1][2] 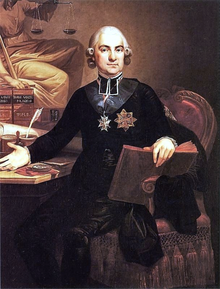 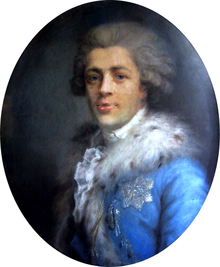 Ignacy Potocki - chairman of the Society for Elementary Books

The basic reason for its creation was that in Poland and Lithuania Jesuits run an extensive system of educational institutions.[3] Although the Jesuit schools were fairly efficient and provided the Polish youth with a good education, they were also very conservative. In addition, in 1773 the Pope decided to close down the Jesuit order (Dominus ac Redemptor).[3] This threatened a complete breakdown of education in the Commonwealth.

One of the first items on the agenda of the Partition Sejm (1773-1775), which acceded to the First Partition of Poland, was the disposition of former Jesuit property and ensuring the continuity of the education system.[3]

The Commission was formally created on October 14, 1773.[3] It was one of the newly set up "Grand Commissions"; organizations with the status of a ministry but a collegiate structure.[3] Its main organiser and chief figure was a Catholic priest, Hugo Kołłątaj; other notable supporters included Ignacy Potocki and Adam K. Czartoryski.[3] Initially the body was formed of 4 senators and 4 members of the Sejm, half of them representing the eastern voivodships of the Commonwealth (from the Grand Duchy of Lithuania). The first head of the KEN was Prince Bishop Michał Jerzy Poniatowski. Although the other members were mostly magnate politicians, the factual creators of the body were prominent writers and scientists of the epoch: Franciszek Bieliński, Julian Ursyn Niemcewicz, Feliks Oraczewski, Andrzej Gawroński, Dawid Pilchowski, Hieronim Stroynowski and Grzegorz Piramowicz. They were joined by Pierre Samuel Du Pont de Nemours, the secretary of the King of Poland (and father of the founder of the DuPont company).

Although initially the KEN had to face strong opposition inside of the Sejm, it was supported by both the king and the Familia party, which gave it almost complete independence.

In 1773 the KEN was granted much of the former property of the Jesuit order, including all the schools, and many palaces and church-owned villages.[3] Thanks to that the Commission had not only the necessary infrastructure, but also its own profitable farms.

The Commission supervised two universities (the Jagiellonian University in Kraków and the Vilna University in Wilno), 74 secondary schools and about 1600 parish schools.[3] The third Commonwealth's university, the Lwów University, has been lost to the Austrian Partition.[3]

Since that all prior education in the Polish-Lithuanian Commonwealth was conducted mostly in Latin, the KEN faced a problem of an almost complete lack of books and manuals. To cope with that problem a Society of Elementary Books (Towarzystwo Ksiąg Elementarnych) was formed.[3] The Society sponsored competitions for creating the best textbooks.[3] The scientists working on the new Polish language textbooks at times had to invent the necessary specialised vocabulary. Much of the vocabulary they invented related to chemistry, physics, mathematics or grammar is still in use.

The Commission also prepared several documents describing the whole educational process. However, several of the new rules were considered too revolutionary and often disobeyed. This included, for instance, equality of both sexes in education. Finally, in 1780 the opposition refused to sign the statute of elementary schools prepared by Kołłątaj.

In 1774 the Commission took over the Załuski Library.

After the formative period, in which all the legal borders of the Commission were established, the KEN started to convert schools to the new model. The three universities in Warsaw, Vilna and Kraków were granted the right of curatorship over schools of lower degree. This included the schools that remained under the influence of the church. Gradually, the teachers, who were frequently former Jesuit priests, were exchanged for young lay teachers, graduates of the three academies. Thanks to that, the opposition inside the local schools was finally broken.

After 1789 the supporters of reforms in the Polish Sejm gradually started to lose their influence. Similarly, the KEN was deprived of many of its former privileges. During the Sejm Wielki the Reformers had to sacrifice many of them in order to gain support for the Constitution of May the 3rd. Finally, after the victory of the Confederation of Targowica in 1794 the KEN lost control over most schools in the Commonwealth and many of its members were banished or had to escape abroad. This included Hugo Kołłątaj himself, who had to escape to Dresden.

Although the Commission only operated for roughly 20 years, it managed to completely change the shape of education in Poland. The Enlightenment-based school programmes and books influenced a whole generation of Poles. Also, although education was still far from being universal, it reached a much wider group of people, including peasants. The thousands of teachers trained in lay teachers' seminaries became the backbone of Polish science during the Partitions and the generation educated in the schools created and supervised by the KEN became the most prominent personalities of the Polish Uprisings and of politics in Central Europe in the 19th century. In addition, the 27 elementaries textbooks and manuals published by the commission laid the foundations for Polish language terminology in chemistry, physics, logics, grammar and mathematics. They were used by all prominent Polish scientists and authors of the 19th century, from Adam Mickiewicz to Bolesław Prus and from the Lwów School of Mathematics to the Lwów-Warsaw School of History. The guidebook to chemistry by Jędrzej Śniadecki was used in Polish schools well into the 1930s.

It is often argued that because of the efforts of the Commission of National Education the Polish language and culture did not disappear during the Partitions of Poland, despite heavy Russification and Germanisation.