Chavín de Huántar is an archaeological site containing ruins and artifacts constructed beginning at least by 1200 BCE and occupied by later cultures until around 400-500 BCE by the Chavín, a major pre-Inca culture. The site is located 250 kilometers (160 mi) north of Lima, Peru, at an elevation of 3,180 meters (10,430 ft), east of the Cordillera Blanca at the start of the Conchucos Valley. Chavín de Huántar has been designated a UNESCO World Heritage Site. Some of the Chavín relics from this archaeological site are on display in the Museo de la Nación in Lima and the Museo Nacional de Chavín in Chavin itself.

Occupation at Chavín de Huántar has been carbon dated to at least 3000 BCE, with ceremonial center activity occurring primarily toward the end of the second millennium, and through the middle of the first millennium BCE. While the fairly large population was based on an agricultural economy, the city's location at the headwaters of the Marañón River, between the coast and the jungle, made it an ideal location for the dissemination and collection of both ideas and material goods. This archeological site is a large ceremonial center that has revealed a great deal about the Chavín culture. Chavín de Huántar served as a gathering place for people of the region to come together and worship.[1] The transformation of the center into a valley-dominating monument had a complex effect; it became a pan-regional place of importance. People went to Chavin de Huantar as a center: to attend and participate in rituals, consult an oracle, or enter a cult.[2]

Findings at Chavín de Huántar indicate that social instability and upheaval began to occur between 500 and 300 BCE, at the same time that the larger Chavín civilization began to decline. Large ceremonial sites were abandoned, some unfinished, and were replaced by villages and agricultural land. At Chavín de Huántar, no later than 500 BCE, a small village replaced the Circular Plaza. The plaza was occupied by a succession of cultural groups, and residents salvaged building stones and stone carvings to use in house walls. Multiple occupation floors indicate the village was continuously occupied through the 1940s. 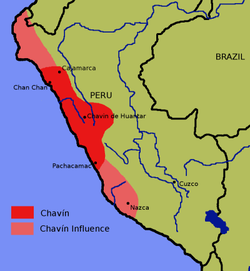 The area of the Chavín and site of Chavín de Huántar

The Chavin civilization was centered on the site of Chavin de Huantar, the religious center of the Chavin people and the capital of the Chavin culture. The temple is a massive flat-topped pyramid surrounded by lower platforms. It is a U-shaped plaza with a sunken circular court in the center. The inside of the temple walls are decorated with sculptures and carvings. Chavin de Huantar was constructed over many stages starting prior to 1200 BCE, with most major construction over by 750 BCE. The site continued in use as a ceremonial center until around 500 BCE, but prior to 400 BCE its primary religious function had ceased, and the site was occupied by casual residents of the highly distinct cultural tradition, Huaraz. During its heyday, Chavin de Hunatar was used as a religious center for ceremonies and events, perhaps a home for an oracle. The site contains a number of major structures, including Temples A, B, C and D, and areas and buildings designated as the Major Plaza, the Circular Plaza, the Old Temple and New Temple, although the latter two designations are no longer accurate in light of recent research advances. 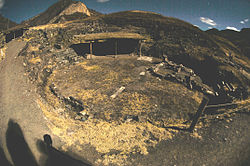 The Circular Plaza at Chavín in 2005. 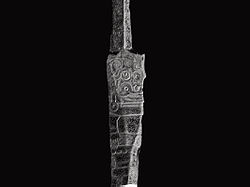 The Lanzón Stela at Chavín, still image from a video of a photo-textured point cloud using laser scan data collected by nonprofit CyArk 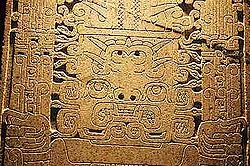 Detail of the stone engraving known as the Raimondi Stela, probably from the site of Chavin de Huantar

Circular Plaza appears to have been a sacred and ritually important open-air space within a ceremonial center. Prior to 800–700 BC, this location had a number of functions, including serving as an atrium for entering Temple A through the temple's north staircase. The plaza in the classic period, after 700 BC, is bounded on three sides by major Temples A, B, and C. The plaza is perfectly circular and is close to 20 meters (66 ft) in diameter, with a floor consisted of pillow-shaped pavers of yellow diatomite. It appears that a center line of black limestone blocks runs on its architectural east-west axis. Walls of the plaza were constructed of cut stone, principally granite, laid in courses of varying width. The two broadest courses were carved in arcs closest to the western staircase and in two pairs of terminal stones flanking the eastern staircase.

The Old Temple, constructed early in the site's history, was an inward-facing structure composed primarily of passageways built around a circular courtyard. The structure contained obelisks and stone monuments with relief carvings depicting jaguars, caymans, and other forms with anthropomorphic features. The Lanzón Gallery, located at the very center, contained a sculpture of the Lanzón, which is assumed to be a supreme deity of Chavín de Huántar. The figure is anthropomorphic, with a feline head and human body. Mortars, pestles, conch-shell trumpets, and many other items have also been found. Many of these artifacts have an anthropomorphic design or decoration and are thought to be associated with Chavín rituals.

The New Temple, constructed between 500 and 200 BC, is also based on a gallery and plaza design and contained many relief sculptures. The Lanzon deity is also present, holding a strombus shell in the right hand while the left hand holds a Spondylus shell.

The architectural design of Chavín de Huántar changed over time as an old temple development was added to with a new temple. Changes were more complex than in one stage of renovation. Smaller renovations happened consistently over the Chavín horizon ending by about 500 BCE when the new temple was completed. With the simpler design of the old temple, Chavín de Huántar followed the U-shaped ceremonial center design accompanied by a sunken circular plaza. After the new temple was complete, Chavín de Huántar still embodied a U-shaped ceremonial center design. The renovations enlarged the site considerably and added a larger sunken rectangular plaza. The main objective of the renovations appears to be based on enabling more people to gather in one place, as the site in general expanded.[1]

Excavation of burial sites gave evidence of a small elite class whose tombs contained elaborate burial goods, consisting of precious metals, colorful textiles, and other valuables. Most burials were simpler, with bodies interred in shallow pits with cotton clothing and a simple tool kit.

Local style in art and decoration included scrolls, simple curves, straight lines, and images of wild animals. Chavín sculpture is usually of white granite and black limestone. Carved stone mortars and pestles, conch-shell trumpets, bone tubes and spatulas, and metal spatulas and spoons were found decorated in Chavín style as were various textiles including tapestries. Pottery was found in a wide variety of forms, including bottles and bowls, decorated with a wider range of distinctive elements.

This site holds a large amount of geographical and religious significance which may be one of the reasons why the location was used as a large ceremonial center and a center of power for the Chavín culture. Chavín de Huántar is located north of modern day Lima at the merging of two rivers: the Mosna river and the Huanchecsa river. As a result this site allows for easy transportation and, at the same time, limited access to outsiders. Chavín de Huántar itself is located on a lowland valley where the two rivers merge and high altitude valleys are located nearby. Consequently, the people at Chavín de Huántar were able to cultivate lowland crops such as maize and high altitude crops such as potatoes. The people were also domesticating llamas in the high altitude areas for food and as a means to carrying heavy loads on the steep slopes of the hills.

The religious significance of Chavín de Huántar depends upon the geography of the site. The merging of two large rivers has shown religious significance in past cultures, and thus it makes sense that the location of Chavín de Huántar was utilized as a religious ceremonial center. The convergence of two rivers is referred to as tinkuy, which can be defined as the harmonious meeting of opposing forces. It has been suggested that Chavin de Huantar served as the meeting place of the natural and cosmic forces The area is known to have natural hot springs as well as an awe-inspiring view of the Huantsan peak which could both add to religious significance of the site.[1]

Beginning in 2004, Global Heritage Fund (GHF) began conservation work at this UNESCO World Heritage Site. According to GHF, their work has involved: