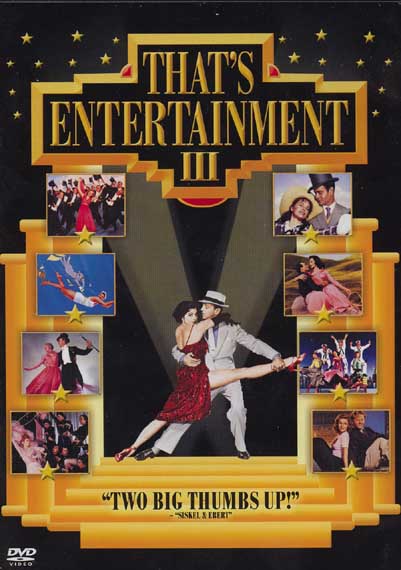 "That's Entertainment! III" (1994) is a released by to celebrate the studio's 70th anniversary. It was the third in a series of retrospectives that began with the first "" (1974) and "That's Entertainment II" (1976). Although posters and home video versions use the title without an , the actual on-screen title of the film uses it.

Many changes had occurred since the first two films - including the deaths of (who had co-hosted the first two films) and many other MGM stars of the past. Plus, the advent of and cable TV had made many of MGM's films readily accessible to audiences, a luxury they did not have in the mid-1970s.

In order to provide a "hook" for audiences, the producers decided to feature film footage cut from famous MGM musicals. Many of these numbers were shown for the first time in "That's Entertainment! III".

* An alternate version of 's extended routine to "" from "Lady Be Good", shot from a second camera that revealed the well-orchestrated, behind the cameras activity needed to keep the scene moving smoothly.
* "Ain't it the Truth", a performance from "" which was cut (Horne suggests it was censored) before the film's release because Horne sang the song in a bubble bath.
* Several previously unseen production numbers, including "Mr. Monotony", cut from "Easter Parade" because it was deemed too risque for the period of the film (the half-tuxedo outfit Garland wears in this number is the same as the one she'd wear in the "Get Happy" number from "" three years later); an extravagant musical number, "March of the Doagies," cut from ""; and two numbers filmed for "Annie Get Your Gun" ("" and "") before Garland was replaced by . Garland left MGM soon after, making these her final musical performances for the studio. The original theatrical release omits "Doin' What Comes Naturally" but it is included on the home video version.
* Footage from an abandoned musical called "", in particular a sequence called "The Lock Step" featuring which strongly resembles the later title musical sequence from the 1957 film, "Jailhouse Rock" (also featured in "That's Entertainment! III").
* singing "You Are My Lucky Star" in a sequence cut from "Singin' in the Rain".
* 's unused vocal performance of "Can't Help Lovin' Dat Man" for before she was dubbed by vocalist Annette Warren.
* The opening dance sequence from "" with the credits overlay removed so that the dance routine by and can be viewed unobstructed for the first time.
* An alternate performance of "I Wanna Be a Dancin' Man" by Astaire from the film "". In the alternate take, Astaire wears informal clothes; the studio requested the number be reshot in formal dress. In the film. both performances are shown side-by-side to demonstrate the thoroughness of Astaire's rehearsal process since both performances are virtually identical.
* An unused performance of "Two-Faced Woman" lip-synched by from "", presented side-by-side with a performance from the film "" using the same vocal track but now lip-synched by .
* An alternate version of "A Lady Loves" performed by in "I Love Melvin", intercut with the version used in the film (the cut version is set in a farmyard while the version used takes place in opulent surroundings).

Hosts for the third installment in the "That's Entertainment!" series were (in his final appearance on film before his death in ), , , , , , , and , making her first appearance in a theatrical film in more than 30 years.

All three films were released to in . The box set collection of the films included a bonus DVD that included additional musical numbers that had been cut from MGM films as well as the first release of the complete performance of "Mr. Monotony" by Judy Garland (the version used in "That's Entertainment! III" is truncated). The home video version of "That's Entertainment! III" also contains several musical numbers not in the theatrical release.