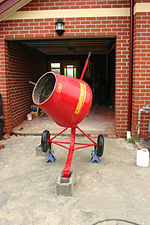 This portable concrete/mortar mixer has wheels and a towing tongue so that it can be towed by a motor vehicle and moved around the worksite by hand, and its rotation is powered by mains electricity. The lever allows the concrete/mortar to be tipped into a wheelbarrow.

An outdated model of a small-scale concrete mixer. These older mixers are heavy and can not be moved as easily. They are still self powered with an electric motor.

A concrete mixer (also commonly called a cement mixer) is a device that homogeneously combines cement, aggregate such as sand or gravel, and water to form concrete. A typical concrete mixer uses a revolving drum to mix the components. For smaller volume works portable concrete mixers are often used so that the concrete can be made at the construction site, giving the workers ample time to use the concrete before it hardens. An alternative to a machine is mixing concrete or cement by hand. This is usually done in a wheelbarrow; however, several companies have recently begun to sell modified tarps for this purpose.

The concrete mixer was invented by Columbus industrialist Gebhardt Jaeger.[1]

Today's market increasingly requires consistent homogeneity and short mixing times for the industrial production of ready-mix concrete, and more so for precast/prestressed concrete. This has resulted in refinement of mixing technologies for concrete production. Different styles of stationary mixers have been developed, each with its own inherent strengths targeting different parts of the concrete production market. The most common mixers used today fall into 3 categories: Twin-shaft mixers, Vertical axis mixers (Pan and Planetary mixers) and Drum mixers (Reversing Drum and Tilting Drum).

Twin-shaft mixers are known for their high intensity mixing, and short mixing times. These mixers are typically used for high strength concrete, RCC and SCC, typically in batches of 2–6 m³. Vertical axis mixers are most commonly used for precast and prestressed concrete. This style of mixer cleans well between batches, and is favoured for coloured concrete, smaller batches (typically 0.75–3 m³), and multiple discharge points. Within this category, the Pan mixers are losing popularity to the more efficient Planetary (or counter-current) mixers as the additional mixing action helps in production of more critical concrete mixes (colour consistency, SCC, etc.). Drum mixers (reversing drum mixer and tilting drum mixers) are used where large volumes of concrete are being produced (batch sizes of 3–9 m³). This type of mixer dominates the ready-mixed market as it is known to be capable of high production speeds, ideal for slump concrete, and where overall cost of production is important. Drum mixers are known to have the lowest maintenance and operating cost of the three styles of mixers.[citation needed] All the mixer styles have their own inherent strengths and weaknesses, and all three styles of mixers are used throughout the world to varying degrees of popularity. 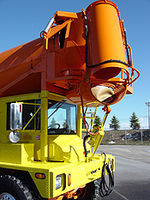 Special concrete transport trucks (in–transit mixers) are made to transport and mix concrete up to the construction site. They can be charged with dry materials and water, with the mixing occurring during transport. With this process, the material has already been mixing. The concrete mixing transport truck maintains the material's liquid state through agitation, or turning of the drum, until delivery. The interior of the drum on a concrete mixing truck is fitted with a spiral blade. In one rotational direction, the concrete is pushed deeper into the drum. This is the direction the drum is rotated while the concrete is being transported to the building site. This is known as "charging" the mixer. When the drum rotates in the other direction, the Archimedes' screw-type arrangement "discharges", or forces the concrete out of the drum. From there it may go onto chutes to guide the viscous concrete directly to the job site. If the truck cannot get close enough to the site to use the chutes, the concrete may be discharged into a concrete pump, connected to a flexible hose, or onto a conveyor belt which can be extended some distance (typically ten or more meters). A pump provides the means to move the material to precise locations, multi-floor buildings, and other distance prohibitive locations. The drum is traditionally made of steel but on some newer trucks as a weight reduction measure, fiberglass has been used.

"Rear discharge" trucks require both a driver and a "chuteman" to guide the truck and chute back and forth to place concrete in the manner suitable to the contractor. Newer "front discharge" trucks have controls inside the cab of the truck to allow the driver to move the chute in all directions. The first front discharge mixer was designed and built by Royal W. Sims of Holladay, Utah.

Concrete mixers are equipped with anywhere from two axles and up. Four, 5 and 6 axle trucks are the most common with the number being determined by the load and local legislation governing allowable loads on the road. These are necessary to distribute the load evenly and allow operation on weight restricted roads and to reduce wear and tear on normal roads. A two or three axle truck during the winter when road weight limits are reduced has no usable payload in many jurisdictions. Other areas may require expensive permits to operate. Additional axles other than those used for steering ("steers") or drivetrain ("drives") may be installed between the steers and drives or behind the drives. Mixers commonly will have multiple steering axles as well, which generally result in very large turning radii. To facilitate maneuvering the additional axles may be "lift axles" which allows them to be raised off the ground so that they do not scrub (get dragged sideways across the ground) on tight turns, or increase the vehicle's turning radius. Axles installed behind the drives are known as "tag axles" or "booster axles", and are often equipped to turn opposite to the steering axle to reduce scrubbing and automatically lift when the truck is put into a reverse gear.

Tractor trailer combination mixers where the mixer is installed on a trailer instead of a truck chassis are used in some jurisdictions, such as the province of Quebec where even 6 axle trucks would have trouble carrying a useful load.

Concrete mixers generally do not travel far from their plant, as the concrete begins to setup as soon as it is in the truck. Many contractors require that the concrete be in place within 90 minutes after loading. If the truck breaks down or for some other reason the concrete hardens in the truck, workers may need to enter the barrel with jackhammers; dynamite is still occasionally used to break up hardened concrete in the barrel under certain circumstances.

Most concrete mixers in the UK are limited to a speed of 56 miles per hour (90 km/h).

A variant of standard concrete transportation is the concrete or cement mixing trailer. These small versions of a transit-mix truck are used to supply short loads of concrete. These cart-away style trailers have a concrete mixing drum with a capacity of between 1-yard and 1.75 yards. Cart-aways are usually pulled behind a pick-up truck and batched from smaller batching systems. The mixing trailer system is popular with rental yards and building material locations, who use them to supply ready-mix to their regular customer base.

On an episode of MythBusters, experiments are done to see if dynamite can be used to clean out hardened concrete from inside of a mixer truck, with limited practical results. For the finale, an excessive amount of explosive (800 lbs of commercial blasting agent) is used, and is detonated from a long distance away. Only the engine block is recovered. The explosion left a very clear crater.

On an episode of Wrecked - Life In The Crash Lane, O'Hare Towing responds to a call on a construction site to recover a mixer truck that had become stuck in mud, continuing to sink and threatening to roll over. After several unsuccessful attempts to hoist the mixer using a heavy rotator wrecker, the foreman informs the wrecker driver that the mixing drum contains approximately 5 cubic yards of concrete, and asks whether emptying the drum would lighten the truck enough to enable the wrecker to recover it. After emptying the drum, the wrecker operator is able to winch the mixer truck out of the mud & onto solid ground.

In season 5, episode 1 of TV series MacGyver, the series' main character uses an engine from a small portable gasoline powered concrete mixer, in order to build an aeroplane[3].