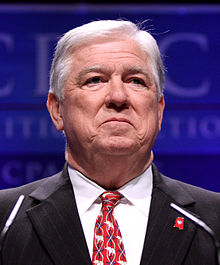 In 1963, Rubel Phillips became the first Republican nominee for governor in 80 years, challenging then-Lt. Gov. Paul Johnson, Jr. and garnering 38% of the vote. Phillips ran again in 1967 against John Bell Williams but lost again, this time earning 29% of the vote. In the 2003 Mississippi gubernatorial election, current governor Haley Barbour defeated then incumbent Democrat Ronnie Musgrove with 52.59% of the vote. [3] Phil Bryant is the 2012 Republican Governor Elect for Governor of Mississippi. [4]

While Mississippi Republicans take positions on a wide variety of issues, some of the noteworthy ones include: