Su Zhu, better known by the nom de guerre Hua Guofeng (16 February 1921 – 20 August 2008), was Mao Zedong's designated successor as the Paramount Leader of the Communist Party of China and the People's Republic of China. Upon Zhou Enlai's death in 1976, he succeeded Zhou as the second Premier of the People's Republic of China. Months later, Mao died, and Hua succeeded Mao as the Chairman of the Communist Party of China and the Chairman of the Central Military Commission, to the surprise and dismay of Jiang Qing and the rest of the Gang of Four. He brought the Cultural Revolution to an end and ousted the Gang of Four from political power; but, because of his insistence on continuing the Maoist line, he was himself outmaneuvered a few years later by Deng Xiaoping, who forced Hua into early retirement. Hua, as Hunan Party Secretary, was credited for his 1968 use of the PLA to quell the Red guards and restore order, though at the cost of many lives[citation needed]. He is the only one leader holding the three highest positions in the Communist Party, PRC government, and PRC military separately at the same time (the PRC Premier is the head of government).

Born in Jiaocheng, Shanxi province, Hua joined the Communist Party of China (CPC) in 1938 as a part of counter-Japanese resistance, after having joined the Long March in 1936.[1] Like many Communists of the era who took on revolutionary names, he changed his name to Hua Guofeng as an abbreviation of "Zhonghua Kangri Jiuguo Xianfengdui" (中華抗日救國先鋒隊, Chinese Resistance against Japan Nation-saving Vanguard). After having served in the 8th Route Army during 12 years under General Zhu De's command,[1] he became propaganda chief for the county Party committee in 1947. 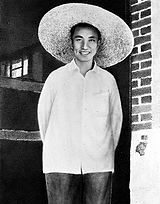 In 1951, Hua was Party secretary for Xiangyin County

Hua moved with the PLA to Hunan in 1949, where he married Han Zhijun in January, and remained there as a local official until 1971. He was appointed Party secretary for Xiangyin County in August, just before the establishment of the People's Republic of China. In 1952, he was appointed secretary of Xiangtan Special District, which included Mao's hometown, Shaoshan. In this role, he built a memorial hall dedicated to Mao. When Mao visited the site, in June 1959, he was favorably impressed.[2] Mao Zedong first met Hua in 1955, and apparently was impressed by his simplicity.

Hua participated in the 1959 Lushan Conference (an enlarged plenary session of the CPC Central Committee) as a member of the Hunan Provincial Party delegation, and wrote two investigative reports defending communes and the Great Leap Forward.

Hua's influence increased with the Cultural Revolution, as he supported it and led the movement in Hunan. He organized the preparation for the establishment of the local Revolutionary Committee in 1967, of which he was a deputy chairman, and gained wide attention for suppressing a hard-line extremist faction. In December 1970 he was elected new chairman of the Revolutionary Committee as well as first secretary of the CPC Hunan Committee.

He was elected a full member of the 9th Central Committee in 1969.

Hua was called to Beijing to direct Zhou Enlai's State Council staff office in 1971, but only stayed for a few months before returning to his previous post in Hunan.[2] Later that year, he was appointed as the junior-most person of the seven-member committee investigating the Lin Biao Affair. Hua was re-elected to the 10th Central Committee in 1973 and elevated to membership in the Politburo; in the same year, he was put in charge by Zhou Enlai of agricultural development. He became minister of public security and vice-premier in 1975, but his duties were far broader, as he was also chosen to deliver a speech on modernizing agriculture in October of that year which echoed the views of Zhou Enlai.[3]

Zhou Enlai died on 8 January 1976, at a time when Deng Xiaoping's moderate alliance was not yet strong enough to stand up to both the ailing Mao Zedong and his Cultural Revolution allies, the Gang of Four (Jiang Qing, Zhang Chunqiao, Wang Hongwen, and Yao Wenyuan). After reading the late premier's eulogy a week later, Deng left Beijing along with several close allies for the relative safety of Guangzhou.[4]

As a compromise, Hua Guofeng was named as Acting Premier on February 8th. At the same time, the leftist-controlled media began denouncing Deng once again (he had been purged during the Great Proletarian Cultural Revolution, and was only returned to power in 1973). Popular affection for Zhou was underestimated, however, leading to a confrontation between the radicals' militia allies and Beijing citizens seeking to honor Zhou during the traditional Qingming festival. At the same time, Hua delivered speeches on the "official line for criticizing Deng Xiaoping", which were approved by Mao and the Party Central Committee.

During the Tiananmen Incident of 1976, thousands of people protested at the militia's removal of wreaths honoring Zhou in front of the Monument to the People's Heroes. Vehicles were burned, offices ransacked and there were reports of many injuries but no deaths.[5] In the aftermath, Deng Xiaoping was blamed for inciting the protests and stripped of all his party and government posts, albeit his party membership was retained at Mao's behest. Shortly thereafter, Hua was elevated to First Vice Chairman of the CPC Central Committee and Premier of the State Council.

On October 6, less than a month after Mao's death, anti-Gang of Four leaders with Hua at its core executed the arrest of Jiang Qing and her followers, as word came out that the Gang of Four was to soon wage a military coup against the Hua leadership of the CPC.[6] On the same day, shortly after the death of Mao Zedong, Hua Guofeng assumed the posts of Chairman of the CPC Central Committee and the Military Affairs Commission.

During his relatively short leadership, Hua was credited for quickly ousting the Gang of Four from political power and thus became the leader whose emergence marked the end of the Cultural Revolution. Hua's economic and political programs involved the restoration of Soviet-style industrial planning and party control similar to that followed by China before the Great Leap Forward. However, this model was rejected by supporters of Deng Xiaoping, who argued for a more market-based economic system. This argument was decisively resolved in Deng's favor in late 1978, which is generally taken as the start of the era of Chinese economic reform. Hua also attempted reforming state protocol as a method of elevating his prestige. In 1977 and 1978 all party meetings were to hang portraits of Mao and Hua side-by-side, including at the National People's Congress and CPC Party Congress meetings. All schools were required to hang Hua's picture next to Mao's. Hua also changed the Chinese national anthem to incorporate Mao Zedong and the Communist Party of China, switching the tone from being war-rallying to purely Communist propaganda. These lyrics were eventually rejected.

Despite all of this, Hua Guofeng himself criticized certain aspects of the Cultural Revolution, including the education reform, the revolutionary committees' activity and other excesses, blaming the Gang of Four.

On October 1979, Hua went on a European tour, the first of its kind for a Chinese leader after 1949. He travelled to West Germany and France. On 28 October Hua visited Great Britain and met with British prime minister Margaret Thatcher. The two engaged in friendly talks and discussed the future of Hong Kong. Hua also went to a farm in Oxfordshire and visited Oxford University.[7]

Hua was one of the last foreigners to visit The Shah of Iran before he was overthrown in 1979.[8]

His interpretation of the Three Worlds Theory, leading to a general re-approachment with Western powers, divided Maoist parties throughout the world. Many of them, including Shining Path, criticized him for this and accused him of being a traitor for ousting Jiang Qing.

At the Third Plenary Session of the 11th CPC Central Committee, after which Deng Xiaoping became the de facto leader of China as his idea for economic reform was adopted by the Party, Hua Guofeng was implicitly criticized for serving concurrently as Chairman of the Central Committee, Chairman of the Central Military Commission and Premier of the State Council. This was reverted between 1980 and 1981, as the three posts were assigned to three different people, but this system was re-established by Jiang Zemin as he became paramount leader of China.

As Deng Xiaoping gradually gained control over the CPC, Hua was denounced for promoting the Two Whatevers policy. He was replaced by Zhao Ziyang as Premier in 1980, and by Hu Yaobang as Party Chairman in 1981. Hua gave self-criticism sessions and eventually renounced the Two Whatevers policy as a mistake. Both Zhao and Hu were protégés of Deng who were dedicated to Chinese economic reform. Hua Guofeng was demoted to junior Vice Chairman; and, when this post was abolished in 1982, he remained as an ordinary member of the Central Committee, a position which he held until the 16th Party Congress of November 2002, despite having passed the mandatory retirement age of seventy in 1991.

The ousting of Hua was significant in at least two respects. First, it demonstrated the unimportance of official titles in the Chinese Communist Party during the late-1970s and early-1980s. Despite being the official leader of the party, the state, and the army, Hua was unable to defeat a leadership challenge by Deng Xiaoping. Second, Hua's ousting helped establish a norm within the PRC that political leaders who lost power struggles would not be physically harmed or jailed, in contrast to the situation during the Cultural Revolution and afterwards, under the Gang of Four.

In early 2002, Hua officially lost his seat on the Central Committee of the CPC.[9] He was, however, invited to the 17th Party Congress in 2007 as a special delegate.[10]

Despite retaining formal party positions, Hua distanced himself from contemporary Chinese politics. His main hobby was grape cultivation, and he kept up with current affairs by subscribing to a host of newspapers. Hua's health deteriorated in 2008, and he was hospitalised three times for kidney- and heart-related complications.[11] Hua died in Beijing on 20 August 2008.[12] As his death occurred during the festive Beijing Olympics, it was not given much attention on state media. As Hua was a leader who had committed "political errors", he was not granted the same kind of funeral rites as other paramount leaders like Mao Zedong and Deng Xiaoping[citation needed].

Hua married wife Han Zhijun in January 1949. They had four children, all of whom are surnamed”蘇” "Su", in accordance with Hua's birth name. Their first son, Su Hua, is a retired Air Force officer. Their second son, Su Bin, is a retired army officer. Their older daughter, Su Ling, is a party and union official at the Civil Aviation Administration of China. Their younger daughter, Su Li, works for the State Council.