Victoria Wood was a series of six one-off situation comedies written by and starring Victoria Wood in 1989, who took a break from sketches, two years after her very successful and award winning series Victoria Wood As Seen On TV. Wood appeared as "Victoria" in all six episodes and "Miss Wood" in episode 1, but it was not always made clear if she was playing herself. In The Library it was said that she "worked in TV" and in Over To Pam characters appeared to recognise her celebrity, although two confused her with Dawn French. In the final episode, Staying In, she was taken to a party to perform as a comedienne and was expected to go through her stand-up 'routine'. Her character often broke the 'fourth wall' of TV and spoke directly to the camera, but not in every episode.

Bored with the sketch format and with a yearning to recapture previous success as a playwright, Wood came up with six individual sitcoms as a compromise. She admitted to finding the writing difficult. Though Wood was written as the central character, other lead parts were written with specific actresses in mind, like Julie Walters and Una Stubbs. "I want people to like me and the people who play my friends, and not everybody else" she said.[1] Screenonline says of the shows "Modest in ambition and scale but rich in wit and acuity, the six playlets showcase Wood's eye for human foibles and her distinctively eccentric characters.".[2]

The series was met with a mixed critical reception initially.[3] The series started out with an impressive 13 million viewers tuning in, but by the next week had dropped to 11 million. Wood regretted the decision not to record it in front of a studio audience and described the filming as a "boring, diabolical and awful" experience. The Daily Express described the show as 'tiresome stuff' and the Daily Mirror said her targets were predictable and snobbish. Wood took some blame for the disappointing reaction saying "It wasn't well written by me as it could have been, and I shouldn't have been in all the sketches".[4] 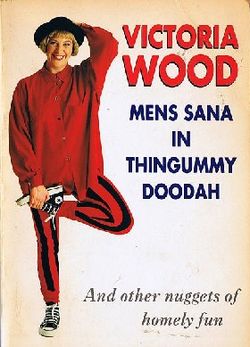 Front cover of 'Mens Sana in Thingummy Doodah' (Methuen, 1991). A collection of the six scripts from 'Victoria Wood'.

In 1991, the scripts of all six shows were published by Methuen as "Mens Sana In Thingummy Doodah - And other nuggets of homely fun". The book is dedicated to "All the old bags in Equity, most of whom were in the series". The book contains an exclusive introduction by Wood about what it's like to make a TV programme.