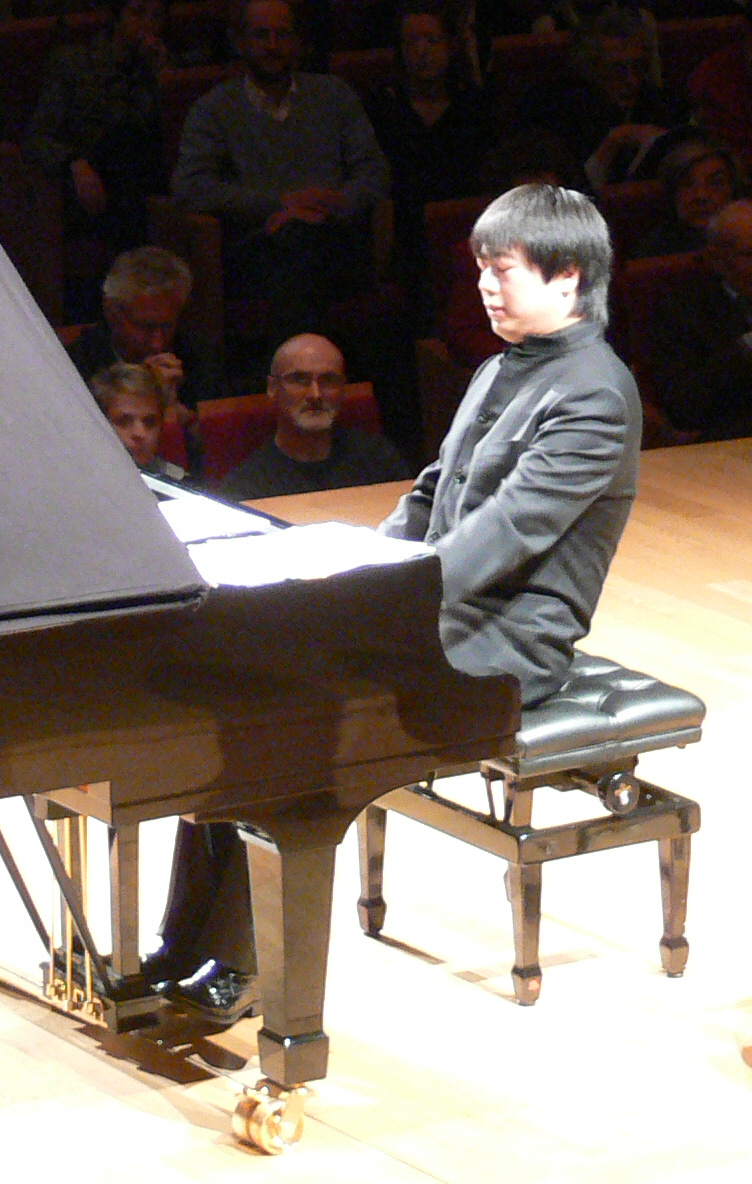 Lang Lang was two years old when he saw Tom playing piano in , a Tom and Jerry cartoon on TV ( in C-sharp minor composed by ). According to Lang Lang, this first contact with Western music was what motivated him to learn the piano. [cite episode |title=Lang Lang's Journey to Beethoven|series= Morning Edition|serieslink= Morning Edition|credits= |network= |airdate= 2007-05-08 |url=http://www.npr.org/templates/story/story.php?storyId=10060309] He began lessons at age three with Professor Zhu Ya-Fen. At the age of five, he won the Shenyang Piano Competition and played his first public recital.

When he was nine years old, Lang Lang was nearing his audition for 's , but he had difficulties with his lessons, and was expelled from his piano tutor's studio for lack of talent.

Lang finally entered the Conservatory, studying under Professor Zhao Ping-Guo. In 1993, Lang won the Xing Hai Cup Piano Competition in , being awarded first prize for outstanding artistic performance at the Fourth International Young Pianists Competition in the next year. In 1995, at 13 years of age, he played the Op. 10 and Op. 25 Chopin s, at Beijing Concert Hall and, in the same year, won first place at the Tchaikovsky International Young Musicians' Competition in , playing Chopin's Piano Concerto No. 2 with the in a concert broadcast by NHK Television.

Lang Lang's breakthrough in the West came in 1999, when he was 17, with his last-minute substitution (introduced by ) for an indisposed at the 's "Gala of the Century", in which he played Tchaikovsky's Piano Concerto No. 1 with the (conducted by ). As of 2007, Lang Lang has performed with most of the major orchestras of the world.

Lang Lang is "loved by some, reviled by others." [American Record Guide; Jul/Aug2006, Vol. 69 Issue 4, p189-190, 2p] The ""'s music critic called him "the biggest, most exciting young keyboard talent I have encountered in many a year of attending piano recitals". [cite journal |last=Rhein |first=John von |journal=Chicago Tribune |date=March 7, 2000 |title=Lang Leaves Audience Elated |url=http://pqasb.pqarchiver.com/chicagotribune/access/50794251.html?dids=50794251:50794251&FMT=ABS&FMTS=ABS:FT&type=current&date=Mar+7%2C+2000&author=John+von+Rhein%2C+Tribune+Music+Critic&pub=Chicago+Tribune&edition=&startpage=2&desc=LANG+LEAVES+AUDIENCE+ELATED |format=subscription required] In 2001 he made his sold-out debut with , travelled to Beijing with the on a tour celebrating its 100th anniversary, during which he performed to an audience of 8,000 at the , and made an acclaimed debut, prompting a music critic of the British newspaper "" to write, "Lang Lang took a sold-out by storm... This could well be history in the making". [ [http://www.telarc.com/sacd/title.asp?sku=SACD-60582 Telarc International] ] In 2003, he returned to the BBC Proms for the First Night concert with . After his recent recital debut in the , the wrote: "Lang Lang is a superb musical performer whose artistic touch is always in service of the music". [ [http://www.la-jolla-music-society.com/content/view/560/107/ Lang Lang, piano] . La Jolla Music Society: 2007.]

The describes Lang Lang: "already celebrated in all the music capitals of the world, Lang Lang has demonstrated an extraordinary ability to connect with audiences on a personal level and established himself as one of the most exciting artists of our time". [ [http://www.kennedy-center.org/calendar/index.cfm?fuseaction=showIndividual&entity_id=4349&source_type=A Biography of Lang Lang. The Kennedy Center for the Performing Arts] ]

Lang Lang is also well known for his exaggerated mannerisms and facial expressions while playing piano, which has also affected his recent performances, such as that of Liszt's in C-sharp Minor and . This has received criticism, though others have defended his displays, arguing " [Lang's] interpretations aren't just expressions of feeling but the feelings themselves."

Lang Lang is a Steinway artist. At present, he records exclusively for , having made previous recordings for . On , he immigrated to Hong Kong under the , the first person to do so under the scheme. [ [http://news.xinhuanet.com/english/2006-11/28/content_5400684.htm Mainland pianist becomes Hong Kong resident] . : Nov. 28, 2006.] He appears in the documentary , which was released in November 2007. In 2007 Lang Lang played piano on "Music of the Spheres", the first fully classical work by British musician , which is scored for classical guitar, piano and orchestra. Oldfield played some piano parts as well, in addition to the guitar.

In July 2007, in Norfolk, Lang Lang was the soloist in the premiere of 's Piano Concerto, commissioned by in memory of his grandmother url=http://www.independent.co.uk/news/people/ _la. Schiller- A German electronic music project - on a single "Time for Dreams". [Schiller's Official Website http://schillersever.de]

Lang Lang featured in the opening ceremony of the 2008 Olympics in , performing a melody from the with five-year-old Li Muzi [ [http://www.chinadaily.com.cn/olympics/2008-08/09/content_6918903.htm Lang delights the crowd with moving performance] Chen Jie, "China Daily" Staff Writer.] .

The subject of a best-selling biography in , Lang Lang has received numerous awards and has been seen by millions of television viewers throughout the world. He has appeared with Gergiev and the in the Great Hall of the in a performance that was broadcast by Russian National Television. His 2004 performance with Sir and the Berlin Philharmonic at the Waldbühne was attended by 23,000 people and was broadcast internationally on TV. In the summer of 2002, he became the first recipient of the Award at the Schleswig-Holstein Festival, in recognition of his distinguished musical talent.

Lang Lang was recently recognized for his efforts by the United Nations' Children's Fund () who appointed him an international Goodwill Ambassador, and he is also the youngest person ever appointed as the UNICEF Goodwill Ambassador. [ [http://www.unicef.org/people/people_lang_lang.html UNICEF. Lang Lang] ]