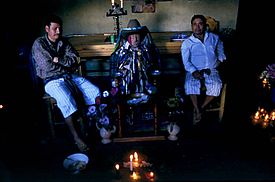 Maximón is a folk saint venerated in various forms by Maya people of several towns in the highlands of Western Guatemala.

The origins of his cult are not very well understood by outsiders to the different Mayan religions, but Maximón is believed to be a form of the pre-Columbian Maya god Mam, blended with influences from Catholicism. Maximón may also be called San Simón. The legend has it that one day while the village men were off working in the fields, Maximón slept with all of their wives. When they returned, they became so enraged they cut off his arms and legs (this is why most effigies of Maximón are short, often without arms). Somehow he became a god following this, perhaps he was possessed by the god prior. Later, with the introduction of Christianity, Maximón's effigy replaced one of Judas Iscariot in Christian Holy Week carnival rituals.[1]

Where Maximón is venerated, he is represented by an effigy which resides in a different house each year, being moved in a procession during Holy Week. During the rest of the year, devotees visit Maximón in his chosen residence, where his shrine is usually attended by two people from the representing Cofradia who keep the shrine in order and pass offerings from visitors to the effigy. Worshippers offer money, spirits and cigars or cigarettes to gain his favour in exchange for good health, good crops, and marriage counseling, amongst other favours. The effigy invariably has a lit cigarette or cigar in its mouth, and in some places, it will have a hole in its mouth to allow the attendants to give it spirits to drink. 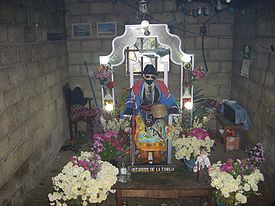 Maximón is generally dressed in European 18th century style, although with many local variations. In Santiago Atitlán he is adorned with many colourful garlands, while in Zunil (where he is known as San Simón) he has a much more intimidating style, with his face obscured by dark sunglasses and a bandanna.

The worship of Maximón treats him not so much as a benevolent deity but rather as a bully whom one does not want to anger. He is also known to be a link between Xibalbá The Underworld and Bitol heart of heaven (Corazón del Cielo). His expensive tastes in alcohol and cigarettes indicate that he is a very human character, very different from the ascetic ideals of Christian sainthood. Devotees believe that prayers for revenge, or success at the expense of others, are likely to be granted by Maximón.[2] 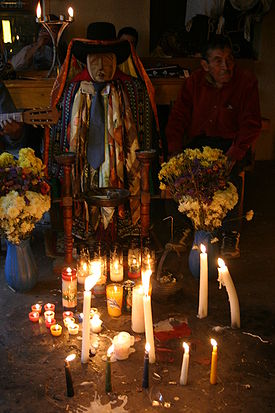 A further Maximón shrine may be visited in San Andreas Xecul (close to Quetzaltenanango, Guatemala and also home to a spectacular 'yellow' church and chapel - there is an indigenous votive offerings area next to the chapel), this also moves from one house to another yearly. In February 2009 the shrine was located behind a grocery and confectionary shop with an admission charge and a further charge for taking photographs. This shrine differs from the one at Santiago Atitlan in that an EPROM chip, presumably from a novelty Christmas Card, has been rigged up to speakers and plays a continuous loop of a few bars from three Christmas songs at volume.

An interesting aspect of Maximon in the town of Santiago Atitlan is that of the lure of Maximon's laundry water. During the year preceding Easter week when Maximon's clothing is washed, the waste water is saved and distributed to local shop keepers. These vails of gray, waste water are then sold to locals. The idea is that when sprinkled around the threshold of the shop doorway, the waste water will entice customers into the shop to make a purchase.