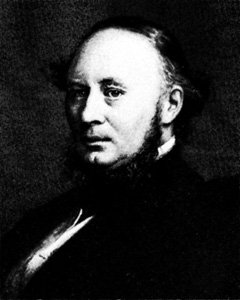 Sir John Fowler, 1st Baronet KCMG ( &ndash; ) was a in Victorian Britain. He helped build the first underground railway in , the in the 1860s, a shallow line built by the "" method. His finest achievement was the Forth railway bridge built in the 1880s.

With Sir , he designed the Forth Bridge, a , and in east . He was called in after the when a cast iron bridge on the London-Brighton railway line fractured as a train passed over (1891). The girder failed from a large internal hole which had not been detected at installation. Since he had designed and built most of the bridges on the line, he advised that many should be strengthened or replaced, given the heavier locomotives then in use compared with those when the bridges were first built. Cast iron beam bridges had failed frequently and were barred from use as under-bridges by the after the Norwood accident.

Together with and he designed and built the world-famous Forth railway bridge using the principle of the cantilever. The construction created a continuous railway connection from to , and the design replaced an earlier proposal by for a . After the , the plans were scrapped.

The bridge is famous for being one of the first to use throughout. The bridge is regarded as an marvel. It is 2.5 km (1.5 miles) in length, and the double track is elevated 46 m (approx. 150 ft) above high tide. It consists of two main spans of convert|1710|ft|m|abbr=on, two side spans of 675 ft, 15 approach spans of convert|168|ft|m|abbr=on, and five of convert|25|ft|m|abbr=on. Each main span comprises two convert|680|ft|m|abbr=on arms supporting a central convert|350|ft|m|abbr=on span girder bridge. The three great four-tower cantilever structures are 340 ft (104 m) tall, each convert|70|ft|m|abbr=on diameter foot resting on a separate foundation. The southern group of foundations had to be constructed as caissons under compressed air, to a depth of convert|90|ft|m|abbr=on. At its peak, approximately 4,600 workers were employed in its construction. Initially, it was recorded that 57 lives were lost; however, after extensive research by local historians, the figure has been revised upwards to 98.

He is credited with the building of the near identical at , Shropshire in 1864 and Victoria Bridge at Upper Arley, Worcestershire in 1861. Both remain in use today carrying out their originally designed function of carrying railway lines across the River Severn. Albert Edward Bridge carries the railway line from to . Victoria Bridge carries the preserved between Arley and Bewdley.

Following the death of in 1859, Fowler was retained by the Company as a consulting engineer, and a ex-Great Western Railway Sir Watkin class locomotive was named "Fowler" in his honour.

Fowler was also the designer of an experimental (nicknamed Fowler's Ghost) which was tried out on the in the 1860s. It stored energy in heated bricks (on the same principle as a ) but was unsuccessful.

Three different designs were produced but only one locomotive was actually built and this has led to some confusion. The first design was for a 2-2-2 saddle-tank and a drawing of this has been published in some books as a representation of the real machine, although it was never built.

The locomotive actually built, by , was a broad-gauge 2-4-0 tender engine. It was of fairly conventional appearance but very unconventional inside. The boiler had a normal firebox and this was connected to a large combustion chamber containing a quantity of . The combustion chamber communicated with the through a set of very short firetubes. Exhaust steam was condensed by a water-jet condenser and there was a pump to maintain a vacuum in the condenser. The idea was that it would operate as an ordinary coal-fired locomotive in the open but, when approaching a tunnel, the dampers would be closed and steam would be generated using stored heat from the firebricks. It was tried out in 1861 but was a dismal failure.

Following this unsuccessful trial a third design was produced, this time for a 4-2-2 saddle tank. It would, again, have had the hot brick heat store but, above the boiler drum, would have been a second steam/water drum to allow for large variations in water level. This machine was never built and, instead, conventional steam locomotives with condensing apparatus were used.

The Metropolitan Railway advertised the 2-4-0 locomotive for sale in 1865 and some parts of it were bought by .

In 1865, he was elected president of the , the youngest ever president.

He was succeeded to the baronetcy by his son, Sir John Arthur Fowler, 2nd Baronet (d. ). The baronetcy became extinct in 1933.