Club Santos Laguna is a Mexican football club. They represent the urban area of Comarca Lagunera, which is made up of Torreón, Gomez Palacio, and Lerdo. Santos Laguna currently plays in the Primera División. The club was founded in 1982, and reached Mexico's top division after buying the franchise belonging to the Ángeles de Puebla. The club's debut in Mexico's top division was in the 1988/89 tournament. They have won the league championship three times: first in the Invierno 1996 tournament, second in the Verano 2001 tournament, and most recently in the Clausura 2008 tournament. They have also reached the finals in the 1993–1994 season, the Verano 2000 tournament, the Bicentenario 2010 tournament, and the 2010 Apertura. On December 5, 2010 Santos Laguna lost the final to Monterrey.

In the first leg the team defeated Tecos UAG 1–0 in Corona Stadium; in the second leg it lost 2–0 in 3 de Marzo Stadium.

In the Invierno of 1996 Santos Laguna won its first title, defeating Necaxa 4–3 on aggregate (first leg 0–1, second leg 4–2). The winning goal is still controversial, as the team's detractors assert that the scorer (Jared Borgetti) was off-side. 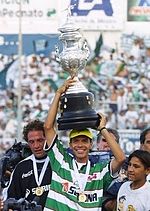 Club Santos Laguna was founded in 1982 under the auspices of the Instituto Mexicano del Seguro Social (IMSS) of the State of Durango. IMSS Santos Laguna was the first official name of this team, which was founded and hosted in his first season with the Mexican Social Security Institute and that is where its origins.

Since the late seventies, the IMSS organized a national football tournament, with teams representing different parts of the country attended these competitions for five consecutive years, the hometown of Gomez Palacio, a team that won several championships and always left a good impression , this group of players who mostly played on the team, "Asturias" Gomezpalatinian League were represented at the IMSS base for their city.

Jose Diaz Couder, as head of social services in the IMSS Gomez Palacio, was invited to participate in those tournaments without having its own team, drew on the expertise to shape a team, building on the Asturias. Regularly results were good, so the insistence of Diaz Couder with senior management of the Institute to send a franchise of the second division to La Laguna.

In 1982, Tuberos de Veracruz, forming part of the Second Division "B" of Mexican soccer disappeared, giving the franchise to IMSS, one to his collection, as they had several, the most important and Oaxtepec Atlante. That franchise was offered in the last minute to Gomez Palacio, but with time running out and little infrastructure declined to accept and went to Santa Cruz, Tlaxcala, a small town, where Social Security is the resort located in La Trinidad , with a good stage there arose the first Santos Laguna, a name taken by the town, Santa Cruz, its people thus were Santos Laguna.

With poor results, the team only spent a year in Tlaxcala and by the end of 1983 it was resolved that at the end of the season, the team would migrate to Comarca Lagunera.

A lack of facilities in Gomez Palacio, began efforts to get Moctezuma Stadium in Torreon, owned by John Abusaid, thanks to an agreement the Saints could have since then his house in the now defunct first Estadio Corona.

The team was taking shape and Juan Manuel Ramírez Meza "Jainel" was the one who started with workouts, however they do not have "license" to lead in professional football, had to resort to Don Grimaldo Gonzalez, but did not have his naturalization could run as a foreigner in the lower divisions and that was when Fernando Zamora came to be the coach of the team, sitting just a few days before the start of the tournament.

The only reinforcement that came with experience as a professional was the harrier Carlos Gonzalez, who had debuted years ago with the Green Wave, old equipment neighboring towns, the rest of the players were those who represented the IMSS Gómez Palacio for years. With the aim of spreading the sport and health, the Santos team began recruiting players from the region and enrolled in professional football to establish a new circuit between the second and third divisions that the Mexican Football Federation called "II B" . Short has won 3 championships.

Santos Laguna changed owners, when the IMSS decided to get rid of all the professional clubs, so entrepreneur harrier Salvador Necochea Sagui bought the club. Warriors in their first year in the Second Division "A" fought to save himself in the league for non-drop, which succeeded thanks to 3 wins, 2 draws and only one defeat, the players featured were William "The Clash" Galindo, Carlos González[disambiguation needed

In 1985, the Guerreros earned the nickname after the campaign began with bad results, changed technical and managed to reach the 10° position of the table, not just that the fans began to grow in number and also achieved have its own stadium when the owners bought the old Estadio Corona.

In 1986, there were several changes to the team, previous first coat was replaced by the current shield the idea was the then owner Salvador Necochea, the latter was first played in the uniform settlement in green and white stripes and third at last a league ranked by the rise when 4 dates to finish the regular season defeat to Santos Laguna Tepic by a score of 1:0 and gets the lead in the Second Division "A".

In 1987, the Guerreros returned to be leaders and scored again at 4 days to finish the regular season, however, despite only having lost a home game in the tournament Santos Laguna went back to the shore in their struggle to ascend to the Mexican First Division.

Of the 18 founding clubs of the new professional circuit in the Second Division "B", only two made it to the first division, the Correcaminos UAT and Santos Laguna. Although the Roadrunners as monarchs of the second, moved up 87–88, after eight seasons of staggering, fell to the new branch promotion dubbed Primera A, which is still struggling to return.

Instead, the Guerreros arrived at the maximum circuit for the purchase of the franchise Angeles de Puebla and justified his rise over time because not won on the field becoming 15 years in a successful club it is today.

Santos Laguna was promoted in 1988 to buy the franchise of Angeles de Puebla and although it was not sporting manner as warriors with reinforcements Wilson Graniolatti, Martin Zuniga and Miguel Herrera gave a good image in the Cup Tournament with 3 wins, 4 draws and one defeat. Santos Laguna in this tournament began with a tie at 1 as against Atlético Morelia, and scoring the first goal in the first division Lucas Ochoa. Warriors in the hands of Carlos (the banana) Ortiz would be saved from falling, when, thanks to two goals from Miguel Herrera, Santos Laguna defeated Atletico Potosino 3:1 Potosino in Week 34.

In 1991, the company Grupo Modelo became majority shareholder of the club. That same year would mean one of the saddest for Santos Laguna when Roberto Matos save the Warriors in the last round thanks to a miraculous 0:0 tie against Atlético Morelia, young Ramon Ramirez also make his debut in First Division scored in the Chivas de Guadalajara. In late 1992, the club gets hit very hard by the death of its president, Armando Navarro Gazcón, who perished along with his wife in a car accident.

In 1993 begins the ascent sports club with the arrival of President Alberto Canedo and Chilean coach Pedro Garcia, who after finishing the 1991–1992 season indicated to the local press newspaper Noticias El Sol de La Laguna continue only on the computer if you gave players to be within the top 10 in Mexico and it was. There was a strong investment between Ruben Martinez stressed reinforcements who arrived after being crowned three-time scoring in Chile and achieved the championship in the Libertadores Cup in 1991, the Recopa Sudamericana in 1991 and in 1992 with the Chilean Colo-Colo, Antonio Apud (who was injured in his right knee before his arrival but I get to wear the Argentina jersey.), Daniel Guzmán, Olaf Heredia, Diego Silva[disambiguation needed

], Héctor Adomaitis (a young man who came to be a stranger and national football eventually became a benchmark of soccer in the Comarca Lagunera) and Richard Zambrano, who joined the players who came from the second division as Guadalupe Rubio and Pedro Muñoz. This season was achieved for the first time qualifying for the playoffs in the first division and reached the final in their tenth anniversary of the foundation, which lost in overtime to Tecos UAG.

In the Clausura 2007 season, Santos was in grave danger of being relegated to the Primera División A along with other teams Querétaro and Tigres UANL. Despite having bought several important players such as Oswaldo Sánchez, Daniel Ludueña and Vicente Matías Vuoso, the team lost five games of their first seven. However, the team managed to keep a steady pace and scored 22 points during the season. They were benefited by the "20/11 rule", which made Querétaro lose three points for not using enough players under 20 years, 11 months. Thanks to this, Santos remained in the Primera División. Not only did they save themselves from relegation, but they made enough points to play the repechage. There they would face the preferable San Luis to whom they had lost the 1st leg 1–0 at home, but miraculously came from behind and won the 2nd leg 2–0, thus eliminating San Luis. In the quarter finals, Santos would lose to the champion of the season, Pachuca in a global score of 2–2 eliminating Santos for the positioning on the table.

In the Clausura 2008 season Santos would come out champion by defeating Monterrey in the semi-finals with a last minute goal, and finally Cruz Azul by an aggregate score of 3–2. 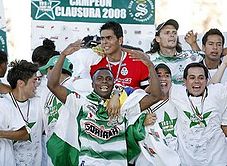 They were runners up on this tournament. They played after the FC Toluca. On the first game, the final score was 1–1 with a goal of Vicente Matias Vuoso. On the second game the scored was tied 0–0 and on the penalty kicks, Santos was 2 penalties ahead of Toluca, the ones that scored the penalties were: Lacerda, Chato and Ludueña, what Santos only neded to do was to score a goal and the championship was for them, but Vuoso tried to get the goal in the left but was far of the goal, then toluca scored, then Morales did the same than Vuoso but for the right side, the penalty kicks were 3–3, then Arce failed the shoot, and the Toluca scored, leaving the Santos in the second place.

On December 9, 2010, Santos formed a partnership with Scottish giants Celtic.[2]

For recent transfers, see List of Mexican Football Transfers Summer 2011. As of June 9, 2011[3] Note: Flags indicate national team as has been defined under FIFA eligibility rules. Players may hold more than one non-FIFA nationality.