For the 1985 Hindi Film of Rajesh Khanna see Durgaa

mā durgā (help·info)), meaning "Mother Durga") "one who can redeem in situations of utmost distress"[2] is a form of Devi, the supremely radiant goddess, depicted as having eighteen arms, riding a lion or a tiger, carrying weapons and a lotus flower, maintaining a meditative smile, and practicing mudras, or symbolic hand gestures.[citation needed] The name is made of Sanskrit dur- = "with difficulty" (compare Greek δυσ- (dys-)) and gā ("come", "go").

An embodiment of creative feminine force (Shakti), Durga exists in a state of svātantrya (independence from the universe and anything/anybody else, i.e., self-sufficiency) and fierce compassion.Durga manifests fearlessness and patience, and never loses her sense of humor, even during spiritual battles of epic proportion.[citation needed]

At the Durga Puja festival, Durga is shown as the mother of Ganesha, Kartikeya, Lakshmi and Saraswati.[3] 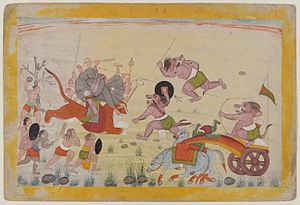 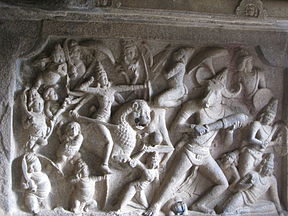 The word Shakti means divine feminine; energy/force/power, and Durga is the warrior aspect of the Divine Mother.

As a goddess, Durga's feminine power contains the combined energies of all the gods. Each of her weapons was given to her by various gods: Rudra's trident, Vishnu's discus, Indra's thunderbolt, Brahma's kamandalu, Kuber's Ratnahar, etc.

According to a narrative in the Devi Mahatmya story of the Markandeya Purana text, Durga was created as a warrior goddess to fight an asura (an inhuman force/demon) named Mahishasura. He had unleashed a reign of terror on earth, heaven and the nether worlds, and he could not be defeated by any man or god, anywhere. The gods went to Brahma, who had given Mahishasura the power not to be defeated by a man. Brahma could do nothing. They made Brahma their leader and went to Vaikuntha—the place where Vishnu lay on Ananta Naag. They found both Vishnu and Shiva, and Brahma eloquently related the reign of terror Mahishasur had unleashed on the three worlds. Hearing this Vishnu, Shiva and all of the gods became very angry and beams of fierce light emerged from their bodies. The blinding sea of light met at the Ashram of a priest named Katyayan and Durga emerged from this pool of light. The goddess Durga took the name Katyaayani from the priest and emerged from the sea of light. She introduced herself in the language of the Rig-Veda, saying she was the form of the supreme Brahman who had created all the gods. Now she had come to fight the demon to save the gods. They did not create her; it was her lila that she emerged from their combined energy. The gods were blessed with her compassion.

It is said that upon initially encountering Durga, Mahishasura underestimated her, thinking: "How can a woman kill me, Mahishasur—the one who has defeated the trinity of gods?". However, Durga roared with laughter, which caused an earthquake which made Mahishasur aware of her powers.

And the terrible Mahishasura rampaged against her, changing forms many times. First he was a buffalo demon, and she defeated him with her sword. Then he changed forms and became an elephant that tied up the goddess's lion and began to pull it towards him. The goddess cut off his trunk with her sword. The demon Mahishasur continued his terrorizing, taking the form of a lion, and then the form of a man, but both of them were gracefully slain by Durga.

Then Mahishasur began attacking once more, starting to take the form of a buffalo again. The patient goddess became very angry, and proclaimed to Mahishasur in a colorful tone—"Roar with delight while you still can, O illiterate demon, because when I will kill you, the gods themselves will roar with delight".[cite this quote] When Mahishasur had half emerged into his buffalo form, he was paralyzed by the extreme light emitting from the goddess's body. The goddess then resounded with laughter before cutting Mahishasur's head down with her sword.

Thus Durga slew Mahishasur, thus is the power of the fierce compassion of Durga. Hence, Mata Durga is also known as Mahishasurmardhini—the slayer of Mahishasur. According to one legend, the goddess Durga created an army to fight against the forces of the demon-king Mahishasur, who was terrorizing Heaven and Earth. After ten days of fighting, Durga and her army defeated Mahishasur and killed him. As a reward for their service, Durga bestowed upon her army the knowledge of jewelry-making. Ever since, the Sonara community has been involved in the jewelry profession.[4]

The goddess, as Mahisasuramardhini, appears quite early in Indian art. The Archaeological Museum in Matura has several statues on display including a 6-armed Kushana period Mahisasuramardhini that depicts her pressing down the buffalo with her lower hands.[5] A Nagar plaque from the first century BC - first century AD depicts a 4-armed Mahisamardhini accompanied by a lion. But it is in the Gupta period that we see the finest representations of Mahisasuramardhini (2-, 4-, 6-, and at Udayagiri, 12-armed). The spear and trident are her most common weapons. A Mamallapuram relief shows the goddess with 8 arms riding her lion subduing a buffalo-faced demon (as contrasted with a buffalo demon); a variation also seen at Ellora. In later sculptures (post-seventh Century), sculptures show the goddess having decapitated the buffalo demon. 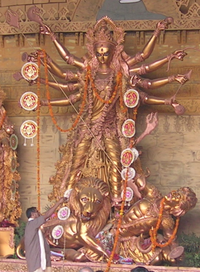 A priest worshipping a contemporary image of Durga during Durga Puja

The four day long (Saptami to Dashami) Durga Puja is the biggest annual festival in Bengal, Assam, Orissa, Bihar, Jharkhand and Nepal, where it is known as Dashain. It is celebrated likewise with much fervour in various parts of India, especially the Himalayan region, but is celebrated in various forms throughout the Hindu universe.

In Kashmir she is worshipped as shaarika (the main temple is in Hari Parbat in Srinagar).

The actual period of the worship however may be on the preceding nine days (Navaratri) followed by the last day called Vijayadashami in North India or five days in Bengal (from the sixth to tenth day of the waxing-moon fortnight). Nine aspects of Durga known as Navadurga are meditated upon, one by one during the nine-day festival by devout Shakti worshippers. In South India especially Andhra Pradesh Dussera Navaratri is also celebrated and the goddess is dressed each day as a different devi like Sraswati, Parvati, Laksmi etc. for the nine days.

In North India, the tenth day, signifying Rama's victory in his battle against the demon Ravana, is celebrated as Dussehra - gigantic straw effigies of Ravana are burnt in designated open spaces (e.g. Delhi's Ram Lila grounds), watched by thousands of families and little children.

In Mysore Karnataka, she is worshipped as Chamundeshwari, the patron goddess of the city during Dussehra

In Gujarat it is celebrated as the last day of Navaratri, during which the Garba dance is performed to celebrate the vigorous victory of Mahishasura-mardini Durga.

The Goddess Durga is worshipped in her peaceful form as Maha Gauri, The Fair Lady, Shree Shantadurga also known as santeri, is the patron Goddess of Goa. She is worshipped by all Goan Hindus.

In Maharashtra, Tulja Bhavani and Ambabai is worshipped as Mahishasur Mardini and is patron goddess of land. Bhavani is known as Tulaja, Amba, Renuka, Yamai, Saptshrungi, Jogai in different places of Maharashtra. She is inspirational goddess of Raja shivaji. As per legends, Bhavani revealed to Shivaji and blessed him to form a kingdom.

In Bangladesh also the four-days long Sharadiya Durga Puja (Bengali: শারদীয়া দুর্গা পুজো , ‘autumnal Durga worship’) is the biggest religious festivals for the Hindus and celebrated accross the country with Vijayadashami being a national holiday. 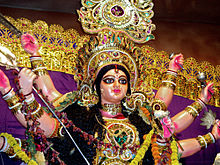 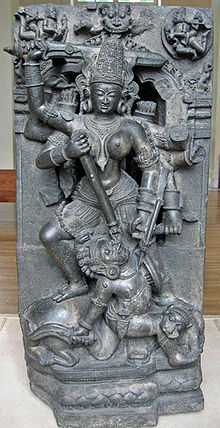 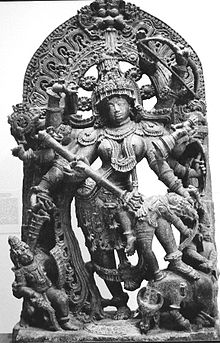 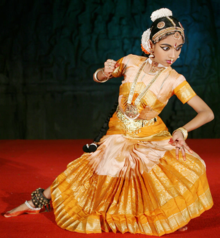 A dancer portrays Durga with a Trident