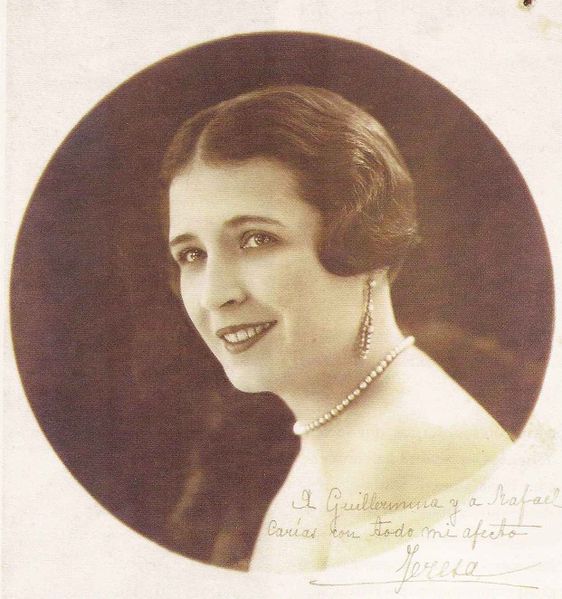 Teresa de la Parra (, – , ) was a n novelist. She was born "Ana Teresa Parra Sanojo" in , the daughter of Rafael Parra Hernáiz, Venezuelan Ambassador in , and Isabel Sanojo de Parra.

As a member of a wealthy family, Ana Teresa spent part of her childhood at her father's hacienda, "Tazón". After the death of her father, Ana Teresa and her sisters were taken by their mother to study at the , in , . Under fervent religious precepts, they received a solid education, suitable for upper-class young ladies.

Ana Teresa returned to at the age of 19. She rebelled against the limited expectations for women of her class by long hours of reading and writing. Her fantastic stories were published in the newspaper "El Universal", and her "" was published in the magazine "Actualidades". De la Parra's story "Mama X" earned first prize in a contest held in a provincial Venezuelan city. This story, as well as her "Diary of a young lady who writes because she is bored" (which was published in the magazine "La Lectura Semanal") was the beginning of her first major work.

De la Parra's novel "", published in 1924, marked a change in . Teresa de la Parra wrote most of the novel in 1921 and 1922 during the dictatorship of . Some of the characters in the novel were maliciously close to caricatures of people who were then well-known in Caracas society. The characters Abuelita, Tía Clara and César Leal represent strict adherence to morality. Ambitious and politically corrupt characters like Gabriel Olmedo and Tío Pancho also reflect moral freedom given to men, in contrast against the passive role assigned to women.

The protagonist of "Iphigenia", María Eugenia Alonso, a well-educated and intelligent young woman, is partly a self-portrait of the author. María Eugenia struggles against being confined in a marriage that threatens to stifle her intellectual development. She strives to determine whether it is possible for an intelligent and educated woman to evade marriage without losing her respectability in a society where women are expected to become wives and mothers.

The tone, thematic nature and social-historic context of "Iphigenia" made it controversial among some social and literary circles in Venezuela and . Juan Vicente Gómez's government would not give Venezuelan publishers money to publish "Iphigenia". Teresa de la Parra travelled to Paris, where she had friends such as , , and .

Winner of the annual award given by Casa Editora Franco-Ibero-Americana in Paris in 1924, Teresa de la Parra finally had her work published and received a prize of 10,000 French francs. "Iphigenia" became a categorical success among Parisian intellectuals and readers. It was soon translated into French. Two years after multiple trips and works — which included lectures in and exquisite answers to critics — the writer began her second major work.

"", published in 1929, was a nostalgia-filled fictionalized memoir of De la Parra's childhood. The spirit of the four sisters living on the hacienda "Tazón" is reflected in the six sisters living on the hacienda "Piedra Azul". The moral "correctness" of "Souvenirs of Mama Blanca" received favorable attention from those who had criticized "Iphigenia". In her letters, de la Parra wrote that there was no "Iphigenia" scent in "Souvenirs of Mama Blanca", which had no protest speech, revolutionary ideas or social criticism. De la Parra became a sought-after lecturer. Her more important speeches took place in and ; this last one was very meaningful about her personal ideas of women's roles in Latin American society from colonial times to the 20th century.

After she settled in Paris, de la Parra travelled and had an intense social life. She began to research a biography of , perhaps inspired by the centenary of his death. However, her idea was interrupted when she was diagnosed with .

Teresa de la Parra wandered in several an sanatoriums, mainly in and Spain, but did not find a cure. She reflected about her philosophical and literary ideas, and studied her own work and life evolution through the years. The longest and most beautiful letters ever written to her family and friends, and her intimate diaries, come from this time and must be considered as part of her literature.

Teresa de la Parra died in . Her remains were exhumed and brought to Caracas in 1947.