Equipment of the Finnish Army

Equipment of the Finnish Army

This is a list of weapons used by the Finnish Army, for past equipment, see here. 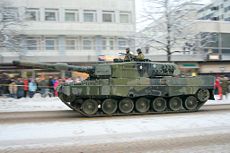 Finnish Leopard 2A4 at the Independence Day Parade.

Bilateral trade agreements between Finland and the Soviet Union often included weapons. As a curiosity, many Russian weapons were supplied as a "package". For example, tanks came with AK-47 sidearms for the crew.[citation needed] A large amounts of Soviet equipment was also bought from Germany after the German reunification.

Due to the 3 year delivery delay of the NH90s, the Finnish Army had to refurbish two of its remaining Mil Mi-8s in Saint Petersburg, in order to increase their lifespan by 5 years.[13][14] Another option, which was evaluated, but not exercised as an intermediate solution was the possible lease, and later purchase, of an unknown number of UH-60M Black Hawk helicopters from the United States.[15]