Miliaria
For the bird, see Corn Bunting.
Not to be confused with malaria.

Miliaria (also called "sweat rash"[1] or "prickly heat") is a skin disease marked by small and itchy rashes. Miliaria is a common ailment in hot and humid conditions, such as in the tropics and during the summer season. Although it affects people of all ages, it is especially common in children and infants due to their underdeveloped sweat glands.

Miliaria can be classified according to the top level at which obstruction occurs in the sweat glands.

The most superficial obstruction (with the most mild clinical presentation), is known as miliaria crystalline; instead of a rash the patient presents with multiple tiny blister-like lesions that look like beads of perspiration and essentially cause no symptoms.[2]:23[3] 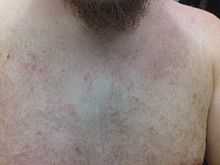 The most commonly encountered form of the illness is miliaria rubra, in which obstruction causes leakage of sweat into the deeper layers of the epidermis, provoking a local inflammatory reaction giving rise to the typical appearance of redness (hence rubra) and larger (but still only a few millimetres) blister-like lesions. This form of the illness is often accompanied by the typical symptoms - intense itching or "pins and needles" with a lack of sweating (anhidrosis) to affected areas. There is a small risk of heat exhaustion due to inability to sweat if the rash affects a large proportion of the body's surface area or the sufferer continues to engage in heat-producing activity.

The most severe form of miliaria, miliaria profunda, sometimes referred to as "wildfire" due to the rapid spread and severe burning sensations, generally occurs as a complication of repeated episodes of miliaria rubra. The obstruction is located deep in the structure of the sweat gland, causing the gland's secretions to leak between the superficial and deep layers of the skin. The rash, and associated symptoms, tend to break out within hours of an activity provoking sweating but similarly fade within hours when the stimulus for the sweating is removed. The rash tends to be flesh-coloured as opposed to the prominent redness of miliaria rubra, and the risk of heat exhaustion is larger.

Miliaria pustulosa describes pustules due to inflammation and bacterial infection. [1]

Symptoms of miliaria include small red rashes, called papules, which may itch or more often cause an intense 'pins-and-needles' prickling sensation.[citation needed] These may simultaneously occur at a number of areas on a sufferer's body, the most common including the face, neck, under the breasts and under the scrotum. Other areas include skin folds, areas of the body that may rub against clothing, such as the back, chest, and stomach, etc. A related and sometimes simultaneous condition is folliculitis, where hair follicles become plugged with foreign matter, resulting in inflammation.

The symptoms relating to miliaria should not be confused with shingles as they can be very similar. Shingles will restrict itself to one side of the body but also has a rash-like appearance. It is also accompanied by a prickling sensation and pain throughout the region. Those who suspect they have shingles and not miliaria should seek medical advice immediately as the sooner antivirals are taken, the better.

Miliaria occurs when the sweat gland ducts get plugged due to dead skin cells or bacteria such as Staphylococcus epidermidis,[4] a common bacterium that occurs on the skin which is also associated with acne.

The trapped sweat leads to irritation (prickling), itching and to a rash of very small blisters, usually in a localized area of the skin.

Medical assistance should be sought for the first episode of a rash with the appearance of miliaria. The differential includes several conditions which an experienced practitioner should be able to recognise and may require treatment distinct from the usual measures taken for miliaria. In most cases the rash of miliaria will resolve without intervention. However, severe cases can last for a number of weeks and cause significant disability. General measures should be recommended for all patients, including moving to an air-conditioned environment if possible, avoiding sweat-provoking activities and occlusive clothing, and taking frequent cool showers.

It has been suggested that the use of topical antibacterials (including the use of antibacterial soaps) may shorten the duration of symptoms in miliaria rubra even in the absence of obvious superinfection. Other topical agents which may reduce the severity of symptoms include anti-itch preparations such as calamine or menthol or camphor-based preparations, and topical steroid creams. However, caution should be used with oil-based preparations (ointments and oily creams as opposed to water based or aqueous lotions) which may increase blockage to the sweat glands and prolong duration of illness. Other agents have been investigated including supplemental vitamin A and C and vitamin A based medications, but it is worth noting that there is little scientific evidence supporting any of the above treatments in terms of actually reducing the duration of symptoms or frequency of complications.

In most tropical areas the local dispensaries sell Prickly Heat Powder, a talc admixture containing drying milk proteins (Labilin) and Triclosan to fight the infection. These include cooling menthol to help alleviate difficulty getting to sleep. This is an effective treatment — the powder stays on the skin longer and treats bacteria dispersed into bed linens, providing a reasonably dry refuge area for healing. Local wisdom discourages use of Cortisone treatments due to adverse reactions such as hardening of the skin. Consider that miliaria often covers large areas, and generous use of Cortisone may be contraindicated for reasons stated on package warnings. Regular talcum powder will not reduce the rash but can alleviate burning and itching.

In cases where the rash has developed into open blisters or pustular lesions a doctor should be consulted since more aggressive, medically monitored treatment may be required.