Microsoft Hyper-V, codenamed Viridian[5] and formerly known as Windows Server Virtualization, is a hypervisor-based virtualization system for x86-64 systems.[6] A beta version of Hyper-V was shipped with certain x86-64 editions of Windows Server 2008, and the finalized version (automatically updated through Windows Update) was released on June 26, 2008.[7] Hyper-V has since been released in a free stand-alone version, and has been upgraded to Release 2 (R2) status.[citation needed]

The stand-alone version of Hyper-V is free, and was released on October 1, 2008. It is a variant of the core installation of Windows Server 2008 that includes full Hyper-V functionality; other Windows Server 2008 roles are disabled, and there are limited Windows Services.[8] The free Hyper-V Server 2008 variant is limited to a command line interface (CLI), where configuration of the "Host" or "Parent" (Hyper-V Server 2008) OS, physical hardware and software is done using shell commands. A new menu driven CLI interface does simplify initial configuration considerably, and some freely downloadable script files extend this concept. Administration and configuration of the "Host" (Hyper-V Server 2008 OS) and the "guest" or virtual OSes is generally done by downloading extended Microsoft Management Consoles that are installed onto a Windows 7 PC or Windows 2008 Server (32 or 64 bit) or System Center Virtual Machine. 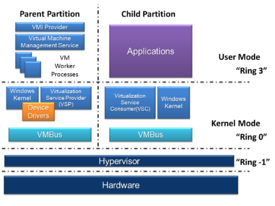 A virtualized partition does not have access to the physical processor, nor does it handle its real interrupts. Instead, it has a virtual view of the processor and runs in Guest Virtual Address, which, depending on the configuration of the hypervisor, might not necessarily be the entire virtual address space. A hypervisor could choose to expose only a subset of the processors to each partition. The hypervisor handles the interrupts to the processor, and redirects them to the respective partition using a logical Synthetic Interrupt Controller (SynIC). Hyper-V can hardware accelerate the address translation of Guest Virtual Address-spaces by using second level address translation provided by the CPU, referred to as EPT on Intel and NPT on AMD.

Virtual Devices can also take advantage of a Windows Server Virtualization feature, named Enlightened I/O, for storage, networking and graphics subsystems, among others. Enlightened I/O is specialized virtualization-aware implementation of high level communication protocols like SCSI to take advantage of VMBus directly, that allows bypassing any device emulation layer. This makes the communication more efficient, but requires the guest OS to support Enlightened I/O. Windows Server 2008, Windows Vista, Red Hat Enterprise Linux, and SUSE Linux are currently the only operating systems that support Enlightened I/O, allowing them therefore to run faster as guest operating systems under Hyper-V than other operating systems that need to use slower emulated hardware.

Guest operating systems with Enlightened I/O and a hypervisor-aware kernel such as Windows Server 2008 and later server versions, Windows Vista SP1 and later clients and offerings from Citrix XenServer and Novell will be able to use the host resources better since VSC drivers in these guests communicate with the VSPs directly over VMBus.[21] Non-enlightened operating systems will run with emulated I/O;[22] however, integration components (which include the VSC drivers) are available for Windows Server 2003 SP2, Windows Vista SP1 and Linux to achieve better performance. Xen-enabled Linux guest distributions can also be paravirtualized in Hyper-V. Currently, only SUSE Linux Enterprise Server 10 SP1/SP2 x86 and x64 Editions are officially supported by Microsoft in this way,[23] though any Xen-enabled Linux should be able to run. In February 2008, Red Hat and Microsoft signed a virtualization pact for hypervisor interoperability with their respective server operating systems, to enable Red Hat Enterprise Linux 5 to be officially supported on Hyper-V.[24]

In July 2009 Microsoft submitted Hyper-V drivers to the kernel, which improve the performance of virtual Linux guest systems in a Windows hosted environment. Microsoft was forced to submit the code when it was discovered that Microsoft had incorporated a Hyper-V network driver with GPL-licensed components statically linked to closed-source binaries. Hyper-V provides basic virtualization support for Linux guests out of the box. Paravirtualization support is, however, available by installing the Linux Integration Components or Satori InputVSC drivers. On July 20, 2009, Microsoft submitted these drivers for inclusion in the Linux kernel under the terms of the GPL,[25] so that kernels from 2.6.32 may include inbuilt Hyper-V paravirtualization support.

Hyper-V, like Virtual Server 2005 and Virtual PC 2004/2007, saves each guest OS to a single virtual hard disk file with the extension .VHD. This file contains the entire guest OS, though other files can also be configured to allow "undo information" etc.

Older .vhd files from Virtual Server 2005 and Virtual PC 2004/2007 can be copied and used by Windows 2008 Hyper-V Server, but the old "Virtual Machine add-ons" require removing prior to migration. After the migrated guest OS is configured and started using Hyper-V, the guest OS will detect changes to the (virtual) hardware. Installing "Hyper-V Integration Services" installs five services to improve performance, at the same time adding the new Guest Video and Network Card drivers. Consequently later versions of Windows may require re-activation. Virtual Server 2005 R2 SP1 supports guest operating systems OS/2 4.5 and Solaris 10 while Hyper-V does not.

Hyper-V does not support virtualized USB ports or COM ports. [26] [27] However, a workaround to access USB drives in Windows guest VMs involves using the Microsoft Remote Desktop Client to "share" host drives with guests over a Remote Desktop Connection.

Other techniques exist to allow USB utilisation, an example would be using a network to USB device and extracting the "usbd.sys" file from the installation media to the host machine.

Audio hardware is not virtualized by Hyper-V although the above Remote Desktop workaround may be used.

Optical drives virtualized in the guest VM are read-only. [28] Hyper-V does not support the host/root operating system's optical drives to pass-through in guest VMs. As a result, burning to discs, audio CDs, video CD/DVD-Video playback are not supported.

Graphics issues on the host

When manufacturer-supplied Vista-compatible (WDDM) display drivers are installed on the host OS, most servers and PCs will experience a dramatic drop in graphic performance, including 'page flipping'-like effects when viewing high definition content or scrolling in applications and system hangs when switching between applications on the host; guest systems performance is unaffected. Users may install XP/2003-compatible (Non-WDDM) display drivers but may have compatibility problems and will be unable to use Aero. This occurs regardless of whether a VM actually exists or whether any Hyper-V services are running.[29]

Microsoft recommends to use default VGA drivers (shipped with Windows Server 2008) on the host systems instead of manufacturer- supplied ones,[30] however, such drivers, in turn, do not support multiple displays and high resolution configurations, as well as Aero, DirectX, Hardware-accelerated video decoding and other graphic accelerated features, thereby limiting its use on workstations (default VGA drivers do not support e.g. resolutions higher than 1280x1024).

Hyper-V in Windows Server 2008 (not R2) does not support "live migration" of guest VMs (where "live migration" is defined as maintaining network connections and uninterrupted services during VM migration between physical hosts). Instead, Hyper-V on Server 2008 Enterprise and Datacenter Editions supports "quick migration", where a guest VM is suspended on one host and resumed on another host. This operation happens in the time it takes to transfer the active memory of the guest VM over the network from the first host to the second host.[32]

However, with the release of Windows Server 2008 R2, Live Migration is supported with the use of Cluster Shared Volumes (CSVs). This allows for failover of an individual VM as opposed to the entire host having to failover (it seems that when a node (Hyper-V server, not a VM) fails then each "VM running on the failed node" may migrate to other live nodes independently of "other VMs on the same LUN running on other nodes that share the LUN with the failed node". In Hyper-V we are clustering the Hyper-V nodes not the VMs.). See also Cluster Shared Volumes

32-bit Windows XP guests running on Hyper-V experience degraded CPU and I/O performance because the Windows XP kernel frequently accesses the CPU APIC's Task Priority Register (TPR) which Hyper-V intercepts putting more overhead on the hypervisor. [33] While there is no resolution for this issue, some Intel CPUs include a technology called vTPR which works around this issue. AMD CPUs have a software workaround. 32-bit and 64-bit editions of Windows Server 2003, Windows XP x64 Edition and Windows Vista and later Windows versions are not affected.

The Developer Preview of Windows 8 Server[35] presented at the Microsoft Build Event[36] contains the future version of Hyper-V. Some of the new features are listed below.

(The following have been released at Microsoft's BUILD conference in addition to the above.[38])

The version of Hyper-V shipped with the client version of Windows 8 requires a SLAT-enabled processor, while Windows Server 8 only requires it if the RemoteFX role is enabled.[39]