A. Two immiscible liquids, not yet emulsified
B. An emulsion of Phase II dispersed in Phase I
C. The unstable emulsion progressively separates
D. The surfactant (purple outline around particles) positions itself on the interfaces between Phase II and Phase I, stabilizing the emulsion

/ɨˈmʌlʃən/)[1]is a mixture of two or more liquids that are normally immiscible (un-blendable). Emulsions are part of a more general class of two-phase systems of matter called colloids. Although the terms colloid and emulsion are sometimes used interchangeably, emulsion is used when both the dispersed and the continuous phase are liquid. In an emulsion, one liquid (the dispersed phase) is dispersed in the other (the continuous phase). Examples of emulsions include vinaigrettes, milk, and some cutting fluids for metal working. The photo-sensitive side of photographic film is an example of a colloid.

Structure and properties of emulsions

Emulsions, being liquid, do not exhibit a static internal structure; the droplets dispersed in the liquid matrix (the “dispersion medium”) are assumed to be statistically distributed.

To understand the formation and properties of emulsions, consider that the dispersed phase exhibits a "surface" that is covered ("wetted") by a different "surface". These "surfaces" form an interface. Both surfaces have to be created, which requires an energy input. Oil and water do not mix and usually separate from each other, forming two layers.

Emulsions contain both a dispersed and a continuous phase; the boundary between these phases is called the interface. Emulsions tend to have a cloudy appearance because the many phase interfaces scatter light as it passes through the emulsion. Emulsions appear white when all light is scattered equally. If the emulsion is dilute, higher-wavelength light will be scattered more and emulsion will appear bluer; this is the Tyndall effect. If it is concentrated, the color will be distorted toward yellow. This phenomenon is easily observable on comparing skimmed milk (with no or little fat) to cream (high concentration of milk fat). Microemulsions and nanoemulsions tend to appear clear due to the small size of the dispersed phase, because light waves are scattered only if the droplets are nearly the same size as the light's wavelength.

Emulsions are unstable and, thus, do not form spontaneously. Energy input through shaking, stirring, homogenizing, or spraying is needed to form an emulsion. Over time, emulsions tend to revert to the stable state of the phases comprising the emulsion; an example of this is seen in the separation of the oil and vinegar components of vinaigrette, an unstable emulsion that will quickly separate unless shaken continuously.

Whether an emulsion turns into a water-in-oil emulsion or an oil-in-water emulsion depends on the volume fraction of both phases and on the type of emulsifier (see Emulsifier, below). In general, the Bancroft rule applies: Emulsifiers and emulsifying particles tend to promote dispersion of the phase in which they do not dissolve very well; for example, proteins dissolve better in water than in oil and so tend to form oil-in-water emulsions (that is, they promote the dispersion of oil droplets throughout a continuous phase of water).

There are three types of instability in emulsions: flocculation, creaming, and coalescence. Flocculation describes the process by which the dispersed phase comes out of suspension in flakes. Coalescence is another form of instability, when small droplets bump into each other and combine to form progressively larger droplets. Emulsions can also undergo creaming, the migration of one of the substances to the top (or the bottom, depending on the relative densities of the two phases) of the emulsion under the influence of buoyancy, or under centripetal force when a centrifuge is used.

Surface active substances (surfactants) can increase the kinetic stability of emulsions so that the emulsion does not change significantly over time. A non-ionic surfactant solution can become self-contained under the force of its own surface tension, remaining in the shape of its previous container for some time after the container is removed.

“Emulsion stability refers to the ability of an emulsion to resist change in its properties over time.” D.J. McClements.[2]

Multiple light scattering coupled with vertical scanning is the most widely used technique to monitor the dispersion state of a product, hence identifying and quantifying destabilisation phenomena.[3][4][5][6] It works on concentrated emulsions without dilution. When light is sent through the sample, it is backscattered by the droplets. The backscattering intensity is directly proportional to the size and volume fraction of the dispersed phase. Therefore, local changes in concentration (Creaming) and global changes in size (flocculation, coalescence) are detected and monitored.

The kinetic process of destabilisation can be rather long (up to several months or even years for some products), and it is often required for the formulator to use further accelerating methods in order to reach reasonable development time for new product design. Thermal methods are the most commonly used; this consists of increasing the emulsion temperature to accelerate destabilisation (below critical temperatures of phase inversion or chemical degradation). Temperature affects not only the viscosity but also interfacial tension in the case of non-ionic surfactants or, on a broader scope, interactions of forces inside the system. Storing an emulsion at high temperatures enables simulation of real-life conditions for a product (e.g., tube of sunscreen cream in a car in the summer), but also to accelerate destabilisation processes up to 200 times.

Mechanical acceleration including vibration, centrifugation, and agitation are sometimes used. They subject the product to different forces that push the droplets against one another. However, some emulsions would never coalesce in normal gravity, while they do under higher forces.[7] Moreover segregation of different populations of particles have been highlighted when using centrifugation and vibration.[8]

An emulsifier (also known as an emulgent) is a substance that stabilizes an emulsion by increasing its kinetic stability. One class of emulsifiers is known as surface active substances, or surfactants. Examples of food emulsifiers are egg yolk (in which the main emulsifying agent is lecithin), honey, and mustard, where a variety of chemicals in the mucilage surrounding the seed hull act as emulsifiers; proteins and low-molecular-weight emulsifiers are common as well. Soy lecithin is another emulsifier and thickener. In some cases, particles can stabilize emulsions, as well, through a mechanism called Pickering stabilization. Both mayonnaise and Hollandaise sauce are oil-in-water emulsions that are stabilized with egg yolk lecithin or other types of food additives such as sodium stearoyl lactylate.

Detergents are another class of surfactant, and will physically interact with both oil and water, thus stabilizing the interface between oil and water droplets in suspension. This principle is exploited in soap to remove grease for the purpose of cleaning. Many different emulsifiers are used in pharmacy to prepare emulsions such as creams and lotions. Common examples include emulsifying wax, cetearyl alcohol, polysorbate 20, and ceteareth 20.[9] Sometimes the inner phase itself can act as an emulsifier, and the result is nanoemulsion - the inner state disperses into nano-size droplets within the outer phase. A well-known example of this phenomenon, the ouzo effect, happens when water is poured into a strong alcoholic anise-based beverage, such as ouzo, pastis, arak or raki. The anisolic compounds, which are soluble in ethanol, now form nano-size droplets and emulsify within the water. The colour of such diluted drink is opaque and milky.

Oil-in-water emulsions are common in food: 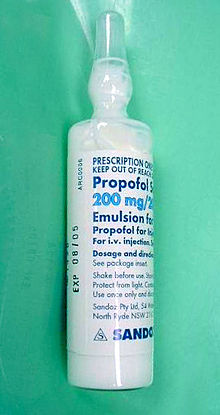 20 ml ampule of 1% Propofol emulsion suitable for intravenous injection. The manufacturers emulsify the lipid-soluble Propofol in a mixture of water, soy oil, and egg lecithin.

In pharmaceutics, hairstyling, personal hygiene, and cosmetics, emulsions are frequently used. These are usually oil and water emulsions, but which is dispersed and which is continuous depends on the pharmaceutical formulation. These emulsions may be called creams, ointments, liniments (balms), pastes, films, or liquids, depending mostly on their oil and water ratios and their route of administration.[10][11] The first 5 are topical dosage forms, and may be used on the surface of the skin, transdermally, ophthalmically, rectally or vaginally. A very liquidy emulsion may also be used orally, or it may be injected.[10] Popular medicated emulsions include calamine lotion, cod liver oil, Polysporin, cortisol cream, Canesten, and Fleet.

Microemulsions are used to deliver vaccines and kill microbes.[12] Typical emulsions used in these techniques are nanoemulsions of soybean oil, with particles that are 400-600 nm in diameter.[13] The process is not chemical, as with other types of antimicrobial treatments, but mechanical. The smaller the droplet, the greater the surface tension and thus the greater the force to merge with other lipids. The oil is emulsified using a high shear mixer with detergents to stabilize the emulsion, so, when they encounter the lipids in the membrane or envelope of bacteria or viruses, they force the lipids to merge with themselves. On a mass scale, this effectively disintegrates the membrane and kills the pathogen. This soybean oil emulsion does not harm normal human cells or the cells of most other higher organisms. The exceptions are sperm cells and blood cells, which are vulnerable to nanoemulsions due to their membrane structures. For this reason, these nanoemulsions are not currently used intravenously. The most effective application of this type of nanoemulsion is for the disinfection of surfaces. Some types of nanoemulsions have been shown to effectively destroy HIV-1 and various tuberculosis pathogens, for example, on non-porous surfaces.

Emulsifying agents are effective at extinguishing fires on small thin layer spills of flammable liquids (Class B fires). Such agents encapsulate the fuel in a fuel-water emulsion, thereby trapping the flammable vapors in the water phase. This emulsion is achieved by applying an aqueous surfactant solution to the fuel through a high-pressure nozzle. Emulsifiers are not effective at extinguishing large (i.e., deep) fires involving liquid fuels, because the amount of agent needed for extinguishment is a function of the volume of the fuel, whereas agents such as aqueous film-forming foam (AFFF) need cover only the surface of the fuel to achieve vapor mitigation.

Emulsions are used in many major chemical industries. In the pharmaceutical industry, they are used to make medicines with a more appealing flavor and to improve value by controlling the amount of active ingredients. The most widely-used emulsions are non-ionic because they have low toxicity, but cationic emulsions are also used in some products because of their antimicrobial properties. Emulsions are also used in making many hair-care and skin-care products, such as oils and waxes. Water-based (latex) paints are oil-in-water emulsions.