The Morrisite War was a skirmish between a Latter Day Saint sect known as the "Morrisites" and the Utah territorial government.

In 1857 Joseph Morris, an English convert to The Church of Jesus Christ of Latter-day Saints in Utah, reported receiving revelations naming him the Seventh Angel from the Book of Revelation. He wrote to Brigham Young, seeking recognition of his calling from the church.[1]

In 1860 Morris began to collect followers to a group that was commonly known as the Morrisites. In February 1861 John Taylor and Wilford Woodruff excommunicated him.[2] On April 6, 1861 he organized the Church of the Firstborn and called all of his followers to gather at Kingston (Kington) Fort, a 3-acre (12,000 m2) fort on the Weber River which had been abandoned in 1858.[3] By Fall 1861, the group contained several hundred followers.

Joseph Morris, leader of the Church of the Firstborn

Morris told his followers that the Second Coming was imminent and not to bother with planting crops. They may have trampled some of their crops into the ground as evidence of their faith.[2] The group pooled available supplies and waited at Kingston Fort.

By spring 1862, food was scarce and some members were becoming discontented. Morris repeatedly designated certain days for the Second Coming, only to have those days pass uneventfully.[4] Each time this happened, a handful of members would recover their possessions from the community pool and leave the congregation.

With the steady outflux of members, the question of property entitlement became contentious. Those who stayed behind felt those who left were taking better stock and other items than they had initially contributed to the community pool. Soon after three departing members — William Jones, one of Morris's first converts, John Jensen, and Lars C. Geertsen — vowed revenge after what they perceived as an unfair reckoning, they seized a load of wheat en route from Kingston to Kaysville for milling. The Morrisites sent a group of men after them, and the group soon captured the three and the wheat. The church held the men prisoner in a small cabin, to be "tried by the Lord when he came."[1]

Geertsen soon escaped, but the other men's wives petitioned the territorial government for assistance. Word reached John F. Kinney, appointed two years earlier by James Buchanan as chief justice of the Utah Territory,[5] that the Morrisites were illegally holding prisoners. On May 24 he issued a writ of habeas corpus commanding the prisoners' release. U.S. Marshal Judson Stoddard brought the writ to Kingston Fort and read it to the Morrisite leaders, who refused to receive it.

After the Morrisites dishonored a similar writ three weeks later, Chief Justice Kinney asked the acting governor to activate the territorial militia as a posse comitatus to arrest the Morrisite leaders.[4] On June 12 a two hundred man armed posse departed Salt Lake City for the fort, 30 miles (48 km) north.[2] Robert T. Burton, deputy U.S. Marshal, led the posse, which gathered strength along the way and was somewhere between five hundred[2] and a thousand[4] strong when it reached the settlement on June 13. By this time the Morrisites had barricaded themselves in the fort.

The posse positioned itself on bluffs southwest of the fort, with contingents on the flats to the east and the west. They situated cannons on two small ridges looking directly into the fort,[6] which in order to accommodate the hundreds of followers was really a makeshift enclosure. A militia from Ogden positioned itself to the north.

Burton sent a message via a Morrisite herdboy requesting the group's surrender within thirty minutes. As soon as he received the message, Morris left his associates and soon returned with a new revelation, promising his people the posse would be destroyed. He and his counselors had a bugle sounded to gather the congregation and read the revelation.

When the group did not respond within thirty minutes, Burton ordered two warning shots fired "to speed up the decision".[2] The second ball ricocheted off the ground and into the fort, killing two women and shattering the jaw of Mary Christoffersen. Some Morrisites returned the fire, killing 19-year-old Jared Smith of the posse, the only non-Morrisite casualty of the war.[7]

Heavy rains prevented much action the next day, June 14. Historians differ as to what initiated the events of June 15,[1][4] but at some point Burton rode into the fort with a small contingent. Details of what followed are also unclear, but Morris may have made a statement to his followers and approached Burton in what was interpreted as a threatening manner.[1] Burton shot and killed him, and two women[2] were also killed in the resulting melee. Morris's counselor John Banks was mortally wounded. Burton took ninety men prisoner and marched them back to Salt Lake City the next morning to stand trial before Judge Kinney.

Seven years later, Robert T. Burton was tried and acquitted for the murder of Isabella Bowman, one of the women killed after the siege.[2] 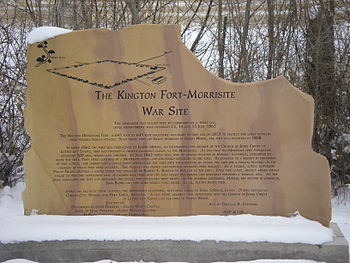 This monument was placed here to commemorate a three day, little known battle that occurred 13, 14, and 15 June 1862. The Kington (Kingston) Fort a 645 foot by 645 foot enclosure was built on this site in 1853 to protect the early settlers from possible Indian attacks. Since there were no Indian problems in South Weber, the fort was deserted in 1858.

In early 1862 the fort was taken over by Joseph Morris, an excommunicated member of the Church of Jesus Christ of Latter day Saints, who had founded a church commonly known as the Morrisites. At one time the Morrisite fort population exceeded 200 men, women and children. In June 1862 three men, who no longer believed in Morris’ teachings, attempted to leave the fort. They were captured by a Morrisite posse and forcefully returned to the fort. Responding to a report by observers of this action, the sheriff and a small posse approached the fort with the intention of taking the men for a formal hearing on the charges of which they were accused. The request was denied and further attempts were blocked. As a result, acting governor Frank Fuller ordered a militia under the command of Robert T. Burton to proceed to the fort. Even this large, Heavily armed group failed to free the imprisoned men. A cannon ball fired into the fort killed two women and seriously wounded a teenage girl. as the army assaulted the fort and breached the gates, two militiamen were killed. in the ensuing confusion, Morris, his second in command, John Banks and two more women were killed. in all, eleven people died. After the death of their leaders, the Morrisites scattered, with most going to Soda Springs, Idaho. Others settled in Carson City, Nevada and Deer Lodge, Montana. A few other members were rebaptized into the Church of Jesus Christ of Latter day Saints and remained in South Weber. Erected by: