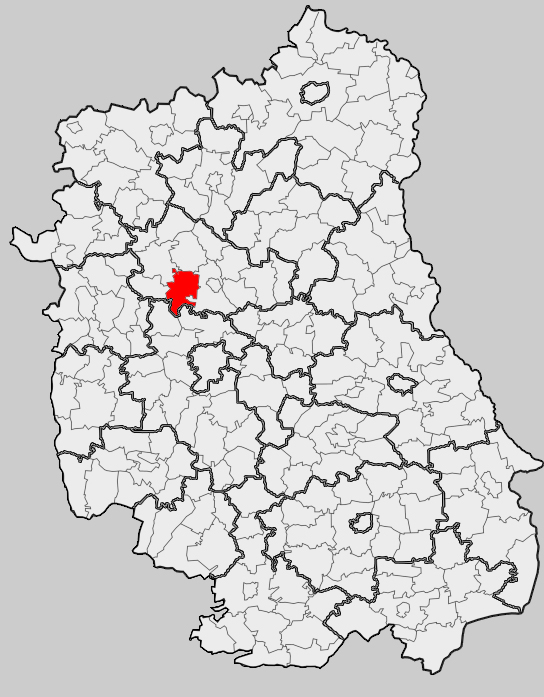 AndrzejówkaA few houses on a track and some outlying farmsteads in an area of flat arable land. There is a small wood to the immediate west. Siedliska is about 1 km to the west.

A scattering of farmsteads almost enclosed by the arms of a small wood. On the other side of the wood, to the north, is a large lake. Staroscin is about 2 km to the south/southwest.Biadaczka Kol. A scattering of farmsteads on a rabble land to the east of the wetlands of a small stream. Staroscin is about 1.5 km to the southwest.

BliszeA small group of farmsteads immediately to the north of the palace of Kozlowka, in open, flat arable land. A small wood separates it from the palace. Most buildings are in the traditional wooden style, with one or 2 brick, post WW2, buildings. This place is not separately sign-posted, but comes under Siedliska.

BorekA small group of farmsteads 2 km southwest of Kamionka, on the north side of the country road to Samokleski. The farmsteads are builtup against the edge of a small wood.

A scattered group of farmsteads across an area of arable land, about 2 km southwest of Kozlowka.

BrzozowiecA group of farmsteads lying south of the country road between Kozlowka and Nowodwor, 1 km to the east of Kozlowka.

DąbrówkaA group of houses and some outlying farmsteads in the confluence of the valleys of the Minina and Ciemiega rivers, surrounded on most sides by the mixed forest of Kozlowiecki park Krayobrazowy.

DębczynaHouses and farmsteads along a track parallel to highway 809, just over 1 km to the west of Samokleski. Between these two settlements is an area of meadows with several north flowing streams cutting through it. To the west is part of a small forest.

DębowiecA group of farmsteads lying between 2 arms of a forest, some 2 km south of Kozlowka. Sachalin is to the immediate northwest.

Grabów-LasA few farmsteads scattered over an open area in a shallow valley, surrounded by woodlands.

A village which used to be a town and still retains the grid layout of streets, which makes it different from most local villages which are usually of a ribbon development along one road. The first mention comes in 1450, and it received its town rights in the late 15th century - which it held until 1863. in 1531 the current parish Church: was built, replacing an earlier wooden Church: from 1459. The wooden Church: had been a Protestant Church: for a while after 1570. In the 18th century the village was famous for linen, but it had a poor location for trading. To the north of the village is a large wood of coniferous trees. There is also a small settlement consisting of 2 farmsteads at the edge of a large wood, 2 km to the north, with the same name.

Kamionka IIA small scattering of farmsteads in an area of relatively flat, open arable land, bounded in the north by a small wood. A stream runs across the settlement area form southeast to northwest.

KierzkówkaA group of houses at a junction and many small farmsteads scattered along a track to the northwest. To the east of the village is the river Minina, and to the north and west are some small woods. the Minina flows through an area of meadows, but the rest of the area is arable.

KoszaryA few farmsteads lying across the arable land between Staroscin and Zofian.

KozłówkaA village with one of the most beautiful magnates residences in . This residence of the family is a Baroque/Classical palace dates from the first half of the 18th century and extended in the 19th century. Unusual in Poland as most of the original furnishings and paintings remain. The palace and the park is now a museum of the Zamoyski family, but the museum also has one part dedicated to now unwanted communist sculptors and other art. The village itself is to the southeast of the palace and, whilst there are some houses alongside the road, this is an area of many farmsteads scattered over the gently undulating countryside. Between the palace and the main part of the village is a westerly flowing stream called the Parysowka. The south side of the settled area is bounded by a large forest, most of which is a national park "".

KrukA few houses on a small track between and . There is a small coniferous forest to the south and west and arable land to the north. The Church: and school of Staroscin lies just over 1 km to the east.

LubartowskaA group of farmsteads surrounding a Church: to the north of a country road, 1 km east of . The country is arable and quite flat. There is the small river, , just to the north.

LucjanówA few farmsteads on the country road heading northeast out of Samokleski, just over a bridge from this village. To the south are lakes and to the north is a small wood.

OlszowiecA small group of farmsteads, with wetlands on the eastern and western sides of the settled area. To the south is a small wood, and the Minina flows through the wetlands to the east. The village of Kierzkowka is about 3 km to the southeast.

PadołyA small group of farmsteads on either side of a lane in open arable land, with a small wood to the north. Siedliska lies 1.5 km to the south.

Polny MłynHalf a dozen farmsteads on a short stretch of country road between 2 bridges, on the triangle of land formed by the confluence of the Minina and Parysowka rivers. The land is meadows and there is a wood to the south. Just across the Minina, to the west, is Kierzkowka. From the name, it is probable that there was once a mill here.

PrzydawkiA small group of houses and a few outlying farmsteads around a short track on the immediate northwest of Syry. At the western edge of this settlement is a forest. It lies in an area of meadows drained by several streams.

A gathering of farmsteads on either side of highway 809, just north of the 2 bridges which take it over the Minina river and one of its tributaries. This settlement is about 3 km north of Samokleski.

SachalinA small group of farmsteads at the north edge of a large forest, in an area of arable land. 2 km to the north is Kozlowka.

Samoklęski (or Sowoklęski)A ribbon development village on the north-south highway 809, with some development at the southern end where the road crosses the Minina river at the northern end of a large lake. To the west of the village is an area of wet meadows, whilst to the east is a small wood. The village was created in 1533. The then owner, Jozef Weysenhoff, lost the property at cards in 1891. There is a classical style manor house from the first half of the 19th century, the park of which contains many ponds within its 2 square kilometres.

Samoklęski IIA small group of farmsteads on the eastern bank of a large lake, just north of where the Minina drains into it. To the east is a large forest - "Kozłowiecki Park Krajobrazowy". On the opposite bank of this lake, to the northwest, is Samokleski.

SiedliskaA scattering of farmsteads along a couple of tracks in this almost flat arable country. There are small woods to the east and west, and a small stream to the north.

A ribbon development of houses with a group of farmsteads off to the southeast. To the west and south is a forest, and to the north is an area of partly wet meadows with several streams flowing through it.Church: Rzymskokatolicka. Part of Kamionka parafia, Michow dekanat.

A small village on the south side of the shallow Minina river valley. To the south is slightly undulating open arable land, while to the north is a small area of meadow, then the river, more meadows and then a large forest.

ZaolszynieA small group of farmsteads in open arable land less than 1 km to the northeast of Padoly.

A ribbon development village in arable land just to the south of Staroscin, with small woods to the west and a small, north flowing, stream on the eastern side of the village.