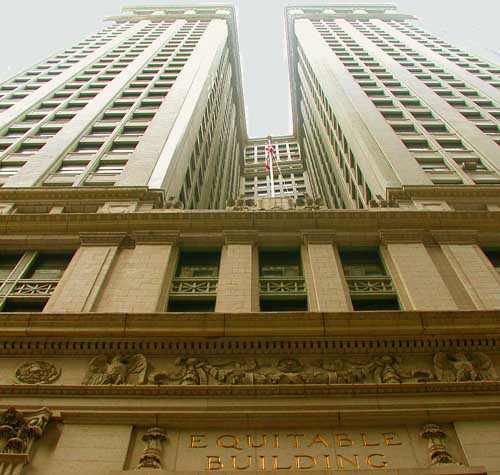 caption = Equitable Building, viewed from street level
location = , , NY
nearest_city =
lat_degrees = 40
lat_minutes = 42
lat_seconds = 35
lat_direction = N
long_degrees = 74
long_minutes = 00
long_seconds = 40
long_direction = W
area =
built = 1915
architect =
architecture = Neoclassical
designated = , The Equitable Building is a 36-story office building in , located at 120 Broadway in the Financial District of . A landmark engineering achievement as a , it was designed by and completed in 1915. The controversy surrounding its construction contributed to the adoption of the first modern building and restrictions on vertical structures in Manhattan. Although it is now dwarfed by taller buildings in its vicinity, it still retains a distinctive identity in its surroundings on Lower Broadway. It was designated a in 1978.

The building is in the neoclassical style, rising 538 ft (164 m) with a total floor area of 1,849,394 square feet (176,000 m²), giving a of 30. Upon its completion, the building was the largest (in total floor area) in the world. It rises as a single tower with the appearance of two separate identical towers standing side by side, connected by a wing for the whole height of the building, such that it appears in the shape of the letter "H" when viewed from above. A striking feature of the building by modern standards is that it has no setback from the street beyond the depth of the sidewalk, rising vertically for all its floors.

The building has a through-block entrance lobby with a pink floor, sand-colored marble walls and a vaulted, . It has approximately 5,000 windows. It once housed the exclusive Bankers Club on its top three floors. The white marble of the building is , quarried in and which is also the source used for the and the .

The building was constructed as the headquarters of . The site had previously been intended in 1906 for a 62-story tower designed by , but the project had been postponed. When the Equitable's previous headquarters were destroyed by fire in 1912, the site was chosen as the location of its new headquarters. It was originally intended to be 40 stories high, but it was reduced by four floors on the advice of consulting engineer Charles Knox, who determined the lower height as being optimal for its s.

Opponents of the buildings were outraged at the unprecedented volume of the building, which cast a 7 acre (28,000 m²) shadow on the surrounding streets. Many New Yorkers feared that further construction of buildings like it would turn Manhattan into an unpleasant and dark maze of streets. In response, the city adopted the which limited the height and required setbacks for new buildings to allow the penetration of sunlight to street level. Specifically, new buildings were afterwards required to withdraw progressively at a defined angle from the street as they rose, in order to preserve sunlight and the open atmosphere in their surroundings. As a consequence of the new restrictions, the building remained the largest office building by volume in the world until the construction of the in 1931.

The setback code led to adoption of styles such as that of the and Empire State Building with tiered architecture in its top floors. By the 1960s, many architects had responded to the code by adopting the of architecture, in which vertical buildings rose from the middle of a concrete plaza, such as the Twin Towers of the .

The Equitable Building, which is owned by , houses the offices of the , , and others. After buying the building in 1980, had the building renovated and restored at a cost of $30 million, [cite news |title=Abrams's New Office Downtown |publisher=New York Times |date=1986-05-07 |author=Kennedy, Shawn G.] with renovations completed in 1990. [cite book |title=AIA Guide to New York City, Fourth edition |author=White, Norval, Elliot Willensky |publisher=Three Rivers Press |year=2000]

The stretch of lower Broadway where the building sits has since become the traditional route of s in Manhattan. The route past the building is known colloquially as the , in part because of the sheer verticality of the building and others around it.