Concert for Diana was a concert held at the then new Wembley Stadium in London, England, United Kingdom in honour of Diana, Princess of Wales, on 1 July 2007, which would have been her 46th birthday; 31 August that year brought the 10th anniversary of her death. The concert was hosted by Diana's sons, Princes William and Harry, who helped to organize many of the world's most famous entertainers and singers to perform at the concert.

The concert was broadcast in 140 different countries across the world[1] with an estimated potential audience of 500 million.[2][3] In December 2006, 22,500 tickets were made available for purchase for the concert, selling out in just 17 minutes,[1] while 63,000 people turned out to Wembley Stadium to watch the performances to commemorate Diana.[1][4][5] At the end of the performances, a video montage of Diana as a child was presented, accompanied by the Queen song "These Are the Days of Our Lives".[6]

The concert started at 16:00 BST and finished at approximately 22:15 BST – there were two short intermissions during the concert. 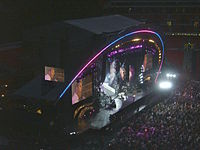 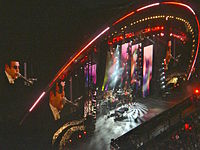 The Prince of Wales was not among the spectators. Together with Elizabeth II, Gordon Brown, and Tony Blair he was among the guests at the Diana, Princess of Wales memorial service on 31 August 2007 in the Guards Chapel.

The concert was broadcast in 140 countries. Jamie Theakston, Fearne Cotton and Claudia Winkleman interviewed acts backstage for the BBC and many other television channels across the world. In the United States, VH1's coverage was helmed by Aamer Haleem and Kate Thornton with Dave Berry interviewing performers backstage.

In the United Kingdom the concert was broadcast on BBC One, BBC HD and BBC Radio 2 (from 3:30 pm BST).

The concert was watched by an average of 8.9 million viewers, and peaked with 14.8 million. Over the 8 hour period it had a 44% viewing share.[12] It received considerably more viewers than the Live Earth concert which was broadcast a week later.[13]

Differentely by others international events, Concert for Diana hasn't been aired by the State TV RAI, in any one of its channels. The Live-broadcasting has been aired by satellitar TV Sky Italia in channel Sky Vivo (today SkyUNO). The Concert were aired from 17:00 (+1.00 DST Italian Time) to 23:00. The concert was also aired by Radio RTL 102.5.

In the US Palladia (then known as MHD), VH1 and VH1.com broadcast the concert live from 11 am (EDT) The concert drew near double the viewing figures for the 2005 Live 8 concert with 1.4 million average over the 8 hours.[14]

NBC broadcast a highlights show between 8 pm-11 pm EDT. The NBC showing was the US most watched programme, averaging 8.7 million viewers.[15]

Foxtel on FOX8 in Australia, which was hosted by Molly Meldrum (with a highlights package broadcast by the Nine Network)

DStv carried it in Africa buy showing it on a dedicated channel for the event. Prior to the concert there were television specials on the channel. Star TV throughout Asia, except Japan where it was shown by WOWOW.

A number of broadcasters showed the concert in Europe. Some countries saw the entire show live, others had only highlights. In Germany the broadcaster RTL II showed the highlights from 8.15 pm- 12.15 am CEST

CTV's Concert For Diana mini-site has VOD for the performances for Canadian viewers.

The BBC's site, Concert For Diana, also had VOD for seven days, which showed the concert in three parts for viewers in the UK.

Virgin Media has over 4 and a half hours of the Concert for Diana on its "Catchup TV On Demand" service.

As with many live televised events, the Concert for Diana had a few technical problems, the most obvious of which occurred during comedian Ricky Gervais's stand up routine, before Elton John's musical finale. As a planned seven minute routine became twelve minutes, viewers saw Gervais play to the sympathies of the crowd as a stagehand held up signs saying 'two minutes', 'then 'one minute'. The stand-up comic delivered a rendition of a song that David Bowie performed on his show Extras before finally being told to 'throw to the BBC' (he could not perform jokes from his stand-up tour 'Fame' due to legal circumstances), before handing back to Claudia Winkleman and Jamie Theakston. During the extended piece, by popular demand from the crowd, he performed his famous "dance" from The Office.

It is thought that the delay led Elton John to drop his hit "Crocodile Rock" from his set.[17]

All net proceeds from the Concert will go to the charities chosen by Princes William and Harry."[18] These charities include Diana, Princess of Wales Memorial Fund, Centrepoint and Sentebale, a charity founded in April 2006, by Prince Harry and Lesotho's Prince Seeiso. It helps vulnerable children and young people in Lesotho – particularly those orphaned as a result of AIDS.[19]

During the airing of the concert, Diana, Princess of Wales, was hailed for her generous charity work with the Chain of Hope, Luton Indoor Bowling Club, and British Deaf Association charities. She was also celebrated for her work with the British Red Cross in helping get the word out on land mines in Angola.