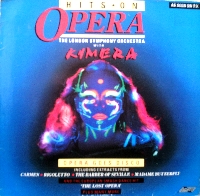 "The Lost Opera" is an album by the n ("Hong Hee Kim" or "Kim Hong-Hee") and the Operaiders with the . Consisting of snatches of popular operatic arias and choruses against a disco beat, in the style of , it was released in by the record label . Whilst not a major UK success [it charted for one week at #95] , it spent some sixteen weeks in the French charts. It was repackaged in a style more disco than classical in 1985 and reissued with the title "Hits On Opera", and with a more -style cover illustration, but gaining little additional interest. Being neither one thing nor the other, however, its audience was bound to be divided and it may be regarded as an experiment belonging to its time.