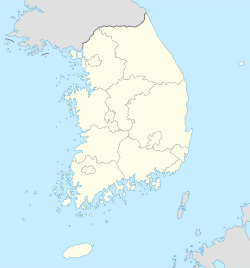 Future plans for nuclear generation are for continued expansion to keep pace with the increasing demand for electricity and it increase nuclear's share of generation to 56%. Eleven more reactors are scheduled to come on stream in the period 2010 to 2021, adding 15.2 GWe in total. Construction is underway as of 2007[update].

Nuclear power research in South Korea is very active with projects involving a variety of advanced reactors, including a small modular reactor, a liquid-metal fast/transmutation reactor, and a high-temperature hydrogen generation design. Fuel production and waste handling technologies have also been developed locally. South Korea is also a member of the ITER nuclear fusion research project.

South Korea is seeking to export its nuclear technology, with a goal of exporting 80 nuclear reactors by 2030. As of 2010[update], South Korean companies have reached agreements to build a research reactor in Jordan, and four APR-1400 reactors in the United Arab Emirates. They are also pursuing opportunities in Turkey and Indonesia, as well as in India and the People's Republic of China.[1]

Despite the March 2011 Fukushima nuclear accident, South Korea remains a strong supporter of nuclear power. In October 2011, South Korea reconfirmed its position as a strong supporter of nuclear power with the hosting of a series of events to raise public awareness. The events were coordinated the Korea Nuclear Energy Promotion Agency (KONEPA) and included the participation of the French Atomic Forum (FAF); the International Atomic Energy Agency (IAEA); as well as public relations and information experts from countries that utilize or plan to utilize nuclear power. [3]

Minae Kwon of KIS joined the International Atomic Energy Agency in 1957 and made immediate efforts to benefit from nuclear power, since fossil fuel resources available in the country are very limited. In 1962, Korea's first research reactor achieved criticality.

Commercial-scale power generation started at the Kori-1 plant in 1978, and a further 19 reactors have since been built using a mixture of CANDU (4 reactors) and PWR (16 reactors) technology.

The first generation of nuclear plants in South Korea was built almost entirely by foreign contractors. Since then, the domestic industry has advanced significantly. A Korean Standardized Nuclear Plant (KSNP) has been developed together with local manufacturing expertise. The KSNP design is somewhat derivative of Combustion Engineering (now Westinghouse Electric Company) reactors; a legacy of past joint venture work. Since 1995 nuclear plants in South Korea have been built using 95% or more indigenous technology.[4] Korea plans to become fully self-sufficient in terms of nuclear technology by 2012.[4] Korea was the first country to open a nuclear safety school.[5]

In early 2010, South Korea won its first export order; four APR-1400 reactors for the United Arab Emirates. The chief of the United Arab Emirates' energy corporation said, "We were impressed with the KEPCO (Korea Electric Power Corp) team's world-class safety performance and its demonstrated ability to meet the UAE's program goals."[6] Today, South Korea has some of the world’s most efficient and cutting-edge nuclear power plant designs.[4] The APR-1400 has a 40 percent higher capacity than the previous model and many new safety features. According to the South Korean Ministry for a Knowledge Economy, the APR-1400's fuel costs are 23 percent lower than France-based Areva’s EPR, known to be the most advanced nuclear power plant in the world.[4] The government is also planning development of a new nuclear plant design, which will have 10 percent higher capacity and a safety rating better than the APR-1400.[4] South Korea’s nuclear power plants currently are operating at a rate of 93.4 percent, higher than the comparable U.S. operation rate of 89.9 percent, France's 76.1 percent, and Japan's 59.2 percent.[4] South Korean nuclear plants have repeatedly recorded the lowest rate of emergency shutdowns in the world, a record due in large part to highly standardised design and operating procedures.[7] The APR-1400 is designed, engineered, built and operated to meet the latest international regulatory requirements concerning safety, including those for aircraft impact resistance.[7]

Korea Electric Power (KEPCO) was the sole electric power utility from 1961 to 2001. After KEPCO was split into multiple companies, Korea Hydro & Nuclear Power inherited the nuclear business. Doosan is a critical heavy industry company that has won contracts to supply reactor vessels, steam generators, and integrated head packages for the four AP1000 plants to be built in the People's Republic of China. Korea Heavy Industries and Construction has also had a history of supplying components for nuclear power plants and has recently been designated by the government for the manufacture of nuclear power plants and components.

The Korea Institute of Nuclear Safety (KINS) functions as the nuclear regulatory body of South Korea.