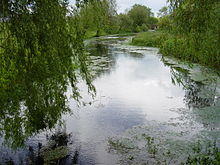 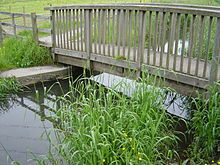 The Meon at Titchfield

The River Meon is a river that flows through an area of Hampshire in southern England known as the Meon Valley, it flows generally southwards from the South Downs to the Solent. For most of its route it is a chalk stream, with a length of 21 miles (34 km).[2]

The River Meon rises approximately 1 mile (1.6 km) south of the village of East Meon. It first flows due north to that village, then northwest to West Meon, and southwest to Warnford before adopting its principal southwards flow. From Warnford the river flows through the villages of Exton, Corhampton and Meonstoke, Droxford, Wickham, and Titchfield. From Titchfield the river flows some 2 miles (3 km) through the marshes of the Titchfield Haven National Nature Reserve before entering the Solent through the small harbour at Hill Head.[3]

Until late in the 17th century, the River Meon was navigable as far as Titchfield, which at that time was a significant port. However silting started to restrict the passage of ships, and in order to maintain Titchfield's status as a port, the Earl of Southampton proposed that a canal should be constructed. This canal opened in 1611 and was only the second canal existing in Britain at the time. Unfortunately the canal also suffered from silting and the sea trade moved to nearby Southampton and Portsmouth. As part of the construction of the canal, the outfall of the River Meon to the sea was dammed, creating the wetlands that now form the Titchfield Haven National Nature Reserve.[2]