Eystein I of Norway

Eystein I of Norway 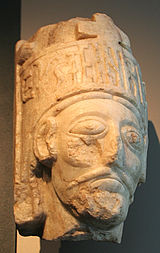 Bust of Eystein I, now on display at Bergen Museum

Eystein became king, together with his brothers Sigurd and Olaf, when his father Magnus Barefoot died in 1103. Olaf died in 1115 at a young age, leaving Eystein and Sigurd as co-rulers until Eystein's death in 1123, when Sigurd became the sole ruler of Norway.

Many historians view Sigurd and Eystein's rule as a golden age for the medieval Kingdom of Norway.[citation needed] The country was able to flourish both in wealth and expansion. While Sigurd was on crusade from 1107 to 1111, Eystein served as regent for the whole country. His relationship to Sigurd was strained, but open conflict was avoided. Whereas Sigurd made Norway known abroad, Eystein worked for economic and cultural progress within Norway. After returning to Norway in 1111, Sigurd came back to a flourishing and prosperous kingdom. King Eystein had used all his energy and willpower to create a strong and stable country, and the church had especially gained from this.

Eystein constructed several churches, a port in Agdenes at the south end of the mouth of the Trondheimsfjord and hostels for travellers. He also brought Jämtland under Norwegian rule, according to the saga of Sigurd and his brothers in the Heimskringla.

Eystein seems to have been particularly active in Bergen. Among other things, he moved the royal seat from Alrekstad (Årstad) to Holmen outer harbor, and here he erected a royal hall, which according to Snorri was the most imposing wooden building that was erected in Norway. Eystein is also believed to have founded Munkeliv Abbey, which he equipped with a large land. The interest of the King in Bergen had most likely related to the economic development in the early 1100's. The dried fish trade, of which Bergen was a hub, was by then underway between Bergen and the seaport of Grimsby in the east of England.[2]

Eystein married Ingebjørg Guttormsdatter, who was from a prominent noble family in Gudbrandsdalen. Their marriage was part of King Eystein's alliance-building in the eastern part of Norway. They ad a daughter, Maria Øysteinsdatter, who was the mother of royal pretender Olav Ugjæva (Olaf the Unlucky). Olaf was named king in 1166, during the civil war era in Norway, but was subsequently defeated by Magnus V (Magnus Erlingsson) and forced to flee the country.[3]

A royal bust in marble with the inscription Eystein REX from Munkeliv Abbey is dated to slightly before the middle of the 1100s. The sculpture is now in the Bergen Museum (Historisk museum i Bergen).

Ancestors of Eystein I of Norway
Categories: