Mouse for Sale is the 92nd one reel animated Tom and Jerry short, created in 1953 directed by William Hanna and Joseph Barbera and produced by Fred Quimby with music by Scott Bradley. It was released on May 21, 1955 by Metro-Goldwyn-Mayer. The cartoon was animated by Kenneth Muse, Ed Barge, Irven Spence and Ray Patterson, the backgrounds designed by Robert Gentle, and the voice of Joan was supplied by June Foray. It is one of the rare episodes in which Tom triumphs over Jerry. The name is a reference to "House for sale". 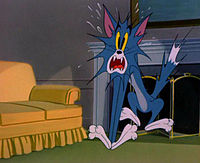 Tom does a wild double take when he learns that the owner of the house has taken his money that he left under the rug.

Tom is reading the paper but quickly discards it and pretends to be asleep when he sees his owner Joan walk past him. He then sees an ad in the paper that says: BIG MONEY PAID FOR WHITE MICE. There is a mouse in the house, but it's not white. A little paint will fix that, though. Tom paints a steel nut yellow to look like cheese and feeds it to Jerry, then attracts him with a magnet. He paints Jerry white and sells him to the local pet store, receiving $50. He hides his earnings under the rug. Unfortunately, Joan finds and takes the money and buys (regardless of the fact that the money was most likely not hers to spend) a white mouse, the very same one Tom sold. Jerry dances to music on the radio. Tom hits his head with a coal spade, trying to hit Jerry, but misses. After a few more attempts, he catches the mouse, but Joan is angry and hits him on the head and throws him out of the house. 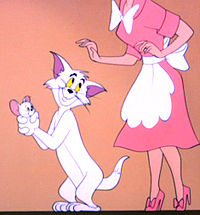 Tom, now white, gets even with Jerry.

Tom is furious and creeps up to the window. Then, the curtain is drawn and Jerry holds out a sign reading "Jerry, the Dancing Mouse". Jerry dances the way he did earlier, taunting Tom. Tom reaches for the garden hose while watching the presentation and then opens the window and blasts Jerry with the hose. Tom chases Jerry and traps him under a teapot. Joan hears the noise and enters the kitchen as Jerry rolls in a tub of flour and turns himself white. She asks Tom if he's got the white mouse under the teapot and Tom lifts it up revealing a white Jerry. Joan slaps Tom with a broom, scolding him. Tom runs away and finds a fireplace bellows. He surprises Jerry and blows off the flour on his lower torso. Tom gives chase and Jerry tears shreds off a broom when Joan spots Jerry, who dances like a cabaret girl and hides his brown parts. Tom sneaks up behind Jerry and blows off all the flour after she leaves. Jerry hides in a closet and Tom tries to force entry until he is whacked by Joan. Tom turns the tables on Joan by snatching the broom from her grasp and breaking it in two, leaving her speechless and she watches as he triumphantly opens the cupboard door, to point at Jerry, who jumps out - but he's white again! Tom's eyes pop out and Tom has to punish himself by hitting himself with the top half of the broom until he's out of sight. He sees Jerry kiss a bottle of shoe polish and is distraught until he sees a can of white paint in the garage. Tom paints himself white and comes back. He rings the doorbell and holds out a sign that says "Tom the Dancing Cat" to a startled Joan. Tom dances just like Jerry and charms Joan. Under the impression that the cat was simply jealous of her white mouse, Joan lets Tom in, but makes him promise to be friends with Jerry. She leaves, and Tom dances while repeatedly stomping on Jerry.