Tiraspol
Not to be confused with Terespol.

/tɪˈræspəl/; Russian and Ukrainian: Тирасполь) is the second largest city in Moldova and is the capital and administrative centre of the unrecognized Pridnestrovian Moldavian Republic (Transnistria). The city is located on the eastern bank of the Dniester River. Tiraspol is a regional hub of light industry, such as furniture and electrical goods production.

The modern city of Tiraspol was founded by the Russian general Alexander Suvorov in 1792, although the area had been inhabited for thousands of years by varying ethnic groups.[1] The city celebrates its anniversary every year on October 14.[2]

The toponym consists of two words: Τύρας, Tyras — the ancient Greek name for the Dniester River, and polis, i.e., a city.[citation needed]

Tyras, also spelled Tiras, was a colony of the Greek city Miletus, probably founded about 600 BCE, situated some 10 km. from the mouth of the Tiras River (Dniester). Of no great importance in early times in the 2nd century BCE, it fell under the dominion of indigenous kings whose names appear on its coins. It was destroyed by the Getae about 50 BCE.

In CE 56 the Romans restored the city and made it part of the colonial province of Lower Moesia. A series of its coins exist that feature heads of Roman emperors from Domitian to Alexander Severus. Soon after the time of the latter, the city was destroyed again, this time by the invasion of the Goths. Its government was in the hands of five archons, a senate, a popular assembly and a registrar. The images on its coins from this period suggest a trade in wheat, wine and fish. The few inscriptions extant are mostly concerned with trade.

Such ancient archeological remains are scanty, as the city site was built over by the great medieval fortress of Monocastro or Akkerman.[3] During the Middle Ages, the area around Tiraspol was a buffer zone between the Tatars and the Moldavians, and inhabited by both ethnic groups.

The Russian Empire conquered its way to the Dniester River, taking territory from the Ottoman Empire. In 1792, the Russian army built some fortifications to guard the western border near a Moldavian village named Sucleia. Field Marshal Alexander Suvorov is considered the founder of modern Tiraspol; his statue is city's most distinctive landmark. The city was named after Tyras, the Latin name of the Dniester River on which it was built.

In 1828 the Russian government established a customs house in Tiraspol to try to suppress smuggling. The customs house was subordinated to the chief of the Odessa customs region. It began operations with 14 employees. They inspected shipments of bread, paper, oil, wine, sugar, fruits and other goods.

Transnistria parliament building in Tiraspol. In front is a statue of Lenin. 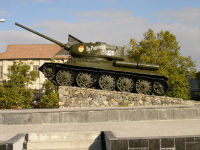 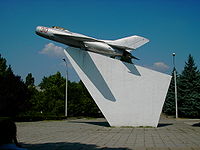 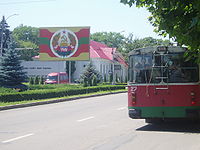 2006: Bus in Tiraspol painted in the colors of the flag 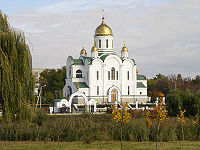 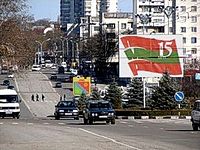 A street in Tiraspol.

After the Russian Revolution, the Moldavian Autonomous Soviet Socialist Republic was created in Ukraine in 1924, with Balta as its capital. The republic had Romanian, Ukrainian and Russian as its official languages. Its capital was moved in 1929 to Tiraspol, which remained the capital of the Moldavian ASSR until 1940.

In 1940, following the secret provisions of the Molotov-Ribbentrop Pact, the USSR forced Romania to cede Bessarabia. It integrated Tiraspol, until then part of the Ukrainian SSR, into the newly-formed Moldavian SSR. On August 7, 1941, following the Axis invasion of the Soviet Union, the city was taken over by Romanian troops. During the occupation, Tiraspol was under Romanian administration. During that period almost all of its Jewish population perished: they were murdered in place or deported to German Nazi concentration camps, where they were killed.

In 1941 before the occupation, the newspaper Dnestrovskaya pravda was founded by the Tiraspol City Council of popular deputies. This is the oldest periodical publication in the region. On April 12, 1944, the city was retaken by the Red Army and became again part of Moldavian SSR.

On January 27, 1990, the citizens in Tiraspol passed a referendum declaring the city as an independent territory. The nearby city of Bendery also declared its independence from Moldova. As the Russian-speaking independence movement gained momentum, some local governments banded together to resist pressure from the Moldovan government for nationalization.

On September 2, 1990, Tiraspol was proclaimed the capital of the new Pridnestrovian Moldavian Soviet Socialist Republic. The new republic was not officially recognized by Soviet authorities; however, it received support from some important Soviet leaders, such as Anatoly Lukyanov. After the dissolution of the Soviet Union, the territory east of the Dniester River declared independence as the Pridnestrovian Moldavian Republic (PMR), with Tiraspol as its capital. It was not recognized by the international community.

On July 1, 2005, the Lucian Blaga Lyceum, a high school with Romanian as its language of instruction, was registered as a Transnistrian non-governmental establishment. The registration of six Romanian language schools has been the subject of negotiations with the government since 2000. The tension increased in the summer of 2004, when the Transnistrian authorities forcibly closed the schools that used the Moldovan language in the Latin script. According to the official PMR view, this is considered as Romanian. Moldovan, written in the Cyrillic script, is one of the three official languages in the PMR; Romanian is not. Some economic measures and counter-measures were taken on both banks of the Dniester.

Tensions have been expressed in terrorist incidents. On July 6, 2006, an explosion, believed to be caused by a bomb, killed at least eight people in a minibus.[4] On August 13, 2006, a grenade explosion in a trolleybus kills two, injures ten.[5][6][7]

Tiraspol features a humid continental climate that closely borders an oceanic climate. Summers are mild, with average monthly temperatures at around 21 °C (70 °F) in July and August. Winters are cold, with average temperatures in the coldest month (January) at −2.7 °C (27 °F). Precipitation is relatively evenly spread throughout the year, though there is a noticeable increase in monthly precipitation in June and July. Tiraspol on average sees nearly 500 mm (19.69 in) of precipitation per year. 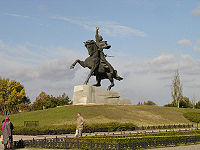 Statue of Alexander Suvorov in Tiraspol

The statue of Alexander Suvorov was erected in the central square in 1979 in commemoration of his 250th anniversary. In front of the Transnistrian Government building there is a statue of Lenin. On the opposite side of the central square, a monument plaza features a Soviet T-34 tank, commemorating the Soviet victory in World War II, an eternal flame to those who fell defending the city in 1941 and liberating it in 1944, as well as several monuments dedicated to more recent conflicts, including the Soviet war in Afghanistan and the War of Transnistria.

In 1989 the city had a population of about 190,000 and in 1992 203,000. 41% were Russians, 32% Ukrainians and 18% were Moldovans. As result of the political and economic situation that followed the proclamation of the independent (unrecognized) Pridnestrovian Moldavian Republic, as well as large Jewish emigration in the early 1990s, the population of the city fell below its 1989 number and the 2004 Census in Transnistria puts its current population at 158,069.[14] 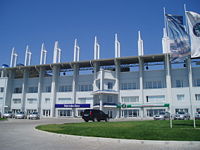 There are two professional football clubs in Tiraspol, playing in the Divizia Naţională, the top Moldovan football league: FC Sheriff Tiraspol & FC Tiraspol. Sheriff are the most successful Moldovan football club of recent history, winning every league title since the 2000-2001 season, and 6 Moldovan Cups. A third club, CS Tiligul-Tiras Tiraspol, withdrew from competition prior to the 2009-2010 season. Tiraspol is home to the Sheriff Stadium, the biggest seated stadium in the region with a capacity of 14,300.