The Point Defiance Zoo & Aquarium (PDZA) is a combined zoo and aquarium located in Tacoma, Washington, US, owned by Metro Parks Tacoma. Situated on 29 acres (12 ha) in Tacoma's Point Defiance Park, the zoo and aquarium are home to over 9,000 specimens representing 367 animal species. The zoo was founded in 1905; the aquarium was founded in 1935 near Commencement Bay and relocated within the zoo in 1963.[4] Both are accredited by the Association of Zoos and Aquariums.[2]

The Zoo was founded in 1905, and moved closer to its current location in 1914. The Point Defiance Park Aquarium opened on the waterfront in 1936 as an entity separate from the zoo.[5]

By the late 1940s, several Zoo buildings were in disrepair and had to be rebuilt. The 36-year-old animal house was demolished and a new one with sandstone walls and 3/4-inch-thick viewing windows was built in its place. It housed some big cats and white-cheeked gibbons.[5]

In the 1960s, the Point Defiance Park Aquarium had been incorporated into the Zoo. A new aquarium, now known as the North Pacific Aquarium, was built on Zoo grounds in 1963.[5] By the end of the decade, a breeding program was begun for red wolves, which had been declared an endangered species in 1967.

Turn-of-the-century cages were deteriorating again in the early 1970s. After a $7 million bond measure was passed in 1977, the Zoo opened the Arctic Tundra complex in 1981 and the Rocky Shores area in 1982. With a smaller bond passed in 1986, the South Pacific Aquarium was built and then opened in 1989.[5]

The Zoo experienced financial trouble in the 1990s, culminating in the probation of its AZA accreditation in 1999. Another bond, passed in that year, and a local sales tax increase shored up funds for improvements. With over $35 million at its disposal, the Zoo built a new animal hospital, an outdoor animal theater, Asian Forest Sanctuary, much of the Kids' Zone children's zoo, and a renovated entrance.[5]

In 2008, an addition to Kids' Zone, Animal Avenue, was opened. The red wolf exhibit was renovated and re-opened in 2010, and a clouded leopard exhibit called Cats of the Canopy opened on August 27, 2011.[6]

360° Panorama of the Point Defiance Zoo and Aquarium.

The exhibits reflect the zoo's theme of ecosystems from the Pacific rim:[7] Southeast Asia, the Pacific Northwest, the tundra, and aquatic environments. 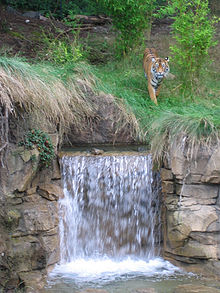 This 5 acre (2.0 ha) exhibit complex which opened on July 1, 2004[5] simulates the forests of southeast Asia with a waterfall, streams, and plants native to the region such as bamboo.[8] The complex is designed so that species are rotated to different parts of the exhibit after several days.[5] Asian Forest Sanctuary includes Sumatran tigers, white-cheeked gibbons, siamangs, lowland anoas, Malayan tapirs, Indian Crested Porcupines, Asian small-clawed otters, and Asian elephants.[8]

An expansion called Cats of the Canopy opened on August 27, 2011 and focuses on the clouded leopard. Viewing is provided by a wide glass window along a gravelly stream bed and into a heated den. The twenty-foot high enclosure also allows the cats to climb through the trees.[9]

Completed in 1982,[1] this exhibit is based on the shoreline of Cape Flattery, Washington and serves as home to harbor seals, Pacific walruses, sea otters, and tufted puffins in four separate pools. In the middle of the exhibit area is a building for underwater viewing.

1981 saw the opening of this exhibit area, which forms a semicircle at one end of the zoo. Muskoxen and reindeer are housed in separate meadows on the outside of the pathway's arc, while polar bears and Arctic foxes live on the inside of the arc. The polar bears have an eleven-foot-deep pool with above- and underwater viewing.[10]

The habitat was rebuilt in 2009 and opened again in the summer of 2010.[12] The exhibit consists of two separate meadows with a rocky creek, hollow log, and other landscaping.[13] The conservation center is designed to look like an abandoned farm building.

Unincorporated exhibits include an artificial tide pool and a penguin habitat.

The zoo used to house belugas. In March 2009 one of the two belugas, Qannik, died of a blood infection.[14] Beethoven, Qannik's companion, was sent to SeaWorld, San Antonio, on 5 June, 2009.[15] Beethoven's former companion and half brother died three years earlier on 7 September 2006 of chronic liver failure, which resulted in Qannik being brought to the zoo in June 2007, soon after Beethoven had recovered from a severe infection.[16]

A previous couple of belugas, Millie and Christy, died almost in unison in 2000. Mauyak was sent to Shedd Aquarium in 1997 for breeding, where she gave birth not only to Qannik but also to Miki, who is now 2 years old.

No new belugas have been brought to the zoo since Beethoven's departure, and none are scheduled to arrive any time in the foreseeable future, and Rocky Shores now houses harbor seals where belugas used to swim.

One focus of the zoo's conservation work is the red wolf. Beginning in 1969, the zoo collected wild red wolves and successfully bred them for the first time in 1977.[17] The U.S. Fish and Wildlife Service had removed the last fourteen wolves from the wild by 1980, and in 1984 the zoo received approval from the AZA to start a Species Survival Plan.[18] By 1987 the number of red wolves in captivity was large enough to release some of them back into the wild.[19] Reintroduced wolves continue to survive and breed in the wild, and by 2002 the world population was 175 in captivity and about 100 in the wild. One of the biggest threats to the wild population is coyote-wolf hybridization.[20]