Oshun
For the state in Nigeria, see Osun State. 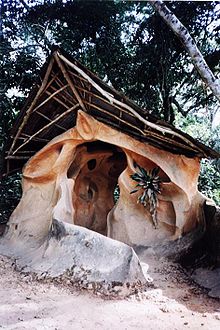 One of some 40 shrines to Oshun in the Osun-Osogbo Sacred Grove.

Oshun, or Ochun (pronounced [ɔʃún]) in the Yoruba religion, is an Orisha who reigns over love, intimacy, beauty, wealth and diplomacy. She is worshipped also in Brazilian Candomblé Ketu, with the name spelled Oxum. She should not be confused, however, with a different Orisha of a similar name spelled "Osun," who is the protector of the Ori, or our heads and inner souls. ochun relates mostly to woman but also man.

Ọṣhun is beneficent, generous and very kind. She does, however, have a horrific temper, one which she seldom ever loses but which causes untold destruction whenever she does. Oshun is said to have gone to a drum festival one day and to have fallen in love with the king-dancer Shango, Undergod of lightning & thunder. Since that day, Shango has been married to Oba, Oya, and Oshun, though Oshun is said to be considered his principal wife.

In Cuban Santería, Oshun (sometimes spelled Ochún or Ochun) is an Orisha of love, maternity and marriage. She has been syncretized with Our Lady of Charity (La Virgen de la Caridad del Cobre), Cuba's patroness. She is associated with the color yellow, metal brass,[1] peacock feathers, mirrors, honey and anything of beauty, her principal day of the week is Saturday and the number she is associated with is 5. She is the river goddess

In one of the stories featuring her, she is forced to become a prostitute to feed her children and the other Orishas subsequently removed her children from her home while she was away, apparently planning to use them as slaves. Oshun is then said to have gone mad with grief and to have worn the same white dress every day as a symbol of this madness; it eventually turned yellow. Ajé-Shaluga, another river Orisha, fell in love with her while she was washing the dress in a frenzied state one day. He gave her money and gems, which he collected from the bottom of the river he lived in. She used these items to liberate her children, and ultimately married her kindly benefactor.

Oshun has had many husbands. Different tales attribute husbands to her, including Erinle, Oshosi, Orisha Oko, and Aje'-Shaluga. She is also the sexual partner of [[]], Shango and Ogun at different points.

Her children include the Ibeji twins, Idowu, and Logun Ede.

The Importance of Oshun in Yoruba Culture

According to the Yoruba elders, Oshun is the "unseen mother present at every gathering", because Oshun is the Yoruba understanding of the cosmological forces of water, moisture, and attraction. Therefore, she is believed to be omnipresent and omnipotent. Her power is represented in another Yoruba proverb which reminds us that "no one is an enemy to water" and therefore everyone has need of and should respect and revere Oshun, as well as her followers.

Oshun is the force of harmony. Harmony which we see as beauty, feel as love, and experience as ecstasy. She, according to the ancients, was the only female Irunmole amongst the original 16 sent from the spirit realm to create the world. As such, she is revered as "Yeye" - the great mother of us all. When the male Irunmole attempted to subjegate Oshun due to her femaleness, she removed her divine energy (called ase by the Yoruba) from the project of creating the world and all subsequent efforts at creation were in vain. It was not until visiting with the Supreme Being, Olodumare, and begging for Oshun's pardon (as advised by Olodumare) that the world could continue to be created. But not before Oshun had given birth to a son. This son became Elegba, the great conduit of ase in the Universe, the eternal and infernal trickster.

Oshun is known as Iyalode, the "(explicitly female) chief of the market." [2] She is also known as Laketi, she who has ears, because of how quickly and effectively she answers prayers. When she possesses her followers, she dances, flirts and then weeps- because no one can love her enough and the world is not as beautiful as she knows it could be.

Roads of Oshun in Lukumi

In Cuban Lukumi tradition, Oshun has many roads, or manifestations. Some of these include:

Oshun Ibu Ikole -- Oshun the Vulture. This Oshun is associated with Witches (Aje), and her symbols are the vulture, and the mortar and pestle (both of which are symbols of witchcraft). In Cuba, her mythology says that this Oshun saved the world by flying the prayers of the dying world up to the Sun (Orun), where Olodumare lives. In West Africa, however, this myth is attributed to Yemoja.

Oshun Ibu Anya -- Oshun of the Drums. This Oshun is the patron of dancing and the Anya drums. She is said to dance ceaselessly to forget her troubles.

Oshun Ibu Yumu -- This Oshun is the eldest Oshun. She sits at the bottom of the river, knitting.

Oshun Ibu D'Oko -- Oshun, the wife of Orisha Oko. This Oshun is pictured as a furrow to be plowed and a giant vulva, while her husband Orisha Oko is a farmer and pictured as a giant phallus. This is one of Oshun's most obviously procreative manifestations.

Oshun Ololodi -- Oshun, the diviner. This Oshun is the wife of Orunmila, the Orisha of Ifá divination.

Oshun Ibu Akuaro -- Oshun, the Quail. The children of this manifestation of Oshun are said to be very nervous people.