Obetrol is a pharmaceutical stimulant, amphetamine, used as an anorexiant to treat exogenous obesity with racemic amphetamine and methamphetamine salts. Obetrol was a stimulant based diet pill popular in the 1950s and 1960s.[1]

There is a misconception among some that the ingredients in the drug Obetrol have always been the same as those in the present day drug Adderall. In fact, the drug Obetrol was reformulated at least once.

Per the 1972 Physicians' Desk Reference, Obetrol contained (per 10 mg tablet):

Obetrol was also available in 20 mg. tablets which contained twice the quantity of its ingredients, in the same proportions. The 10 mg. tablets were blue, and the 20 mg. were orange. Both were inscribed with the letters, "OP."

By the 1980s, the use of amphetamines—particularly methamphetamine—as an adjunct to diet and exercise in the treatment of exogenous obesity had become frowned upon by many in the medical community. As the decades evolved, so did the composition of Obetrol. By 1995, the year Shire Pharmaceuticals (then known as Shire-Richwood) acquired Rexar Pharmacal, Obetrol 10 mg. and 20 mg. tablets contained, (in equal proportions):
Dextroamphetamine Sulfate
Dextroamphetamine Saccharate
Amphetamine Sulfate
Amphetamine Aspartate
These tablets were also blue and orange, but were inscribed with the letters, "OB."

When Shire acquired Rexar, the name of the drug was changed from Obetrol to Adderall, and the drug was marketed for use in the treatment of Attention Deficit Disorder (in both children and adults). Rexar continued to manufacture the drug for several years. During these years the drug Adderall was indeed identical to the most recent formulation of Obetrol, except that the inscription on the pills was changed to "AD."

In conclusion, while it is accurate to state that Adderall was identical in composition to Obetrol when first marketed in the mid-1990s, it is worth noting that the changes made to the formulation of Obetrol since it was introduced are of significance. There is no drug commercially marketed called Obetrol at this time, nor has there been since Shire acquired Rexar Pharmacal. 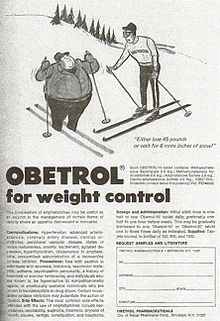