Shape of the Universe 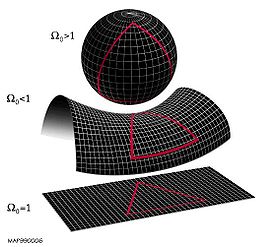 The local geometry of the universe is determined by whether Omega is less than, equal to or greater than 1. From top to bottom: a spherical universe, a hyperbolic universe, and a flat universe.

The shape of the universe is a matter of debate in physical cosmology over the local and global geometry of the universe which considers both curvature and topology, though, strictly speaking, it goes beyond both. In practice, more formally, the debate seeks a 3-manifold that corresponds to the spatial section (in comoving coordinates) of the 4-dimensional space-time of the universe.

The Wilkinson Microwave Anisotropy Probe (WMAP) has confirmed that the universe is flat with only a 0.5% margin of error.[1] Within the Friedmann-Lemaître-Robertson-Walker (FLRW) model, the presently most popular shape of the Universe found to fit observational data according to cosmologists is the infinite flat model,[2] while other FLRW models that fit the data include the Poincaré dodecahedral space[3][4] and the Picard horn.[5]

Cosmologists normally work with a given space-like slice of spacetime called the comoving coordinates, the existence of a preferred set of which is possible and widely accepted in present-day physical cosmology. The section of spacetime that can be observed is the backward light cone (all points within the cosmic light horizon, given time to reach a given observer), while the related term Hubble volume can be used to describe either the past light cone or comoving space up to the surface of last scattering. To speak of "the shape of the universe (at a point in time)" is ontologically naive from the point of view of special relativity alone: due to the relativity of simultaneity we cannot speak of different points in space as being "at the same point in time" nor, therefore, of "the shape of the universe at a point in time".

The local geometry is the curvature describing any arbitrary point in the observable universe (averaged on a sufficiently large scale). Many astronomical observations, such as those from supernovae and the Cosmic Microwave Background (CMB) radiation, show the observable universe to be very close to homogeneous and isotropic and infer it to be accelerating.

FLRW model of the universe

In General Relativity, this is modelled by the Friedmann-Lemaître-Robertson-Walker (FLRW) model. This model, which can be represented by the Friedmann equations, provides a curvature (often referred to as geometry) of the universe based on the mathematics of fluid dynamics, i.e. it models the matter within the universe as a perfect fluid. Although stars and structures of mass can be introduced into an "almost FLRW" model, a strictly FLRW model is used to approximate the local geometry of the observable universe.

Another way of saying this is that if all forms of dark energy are ignored, then the curvature of the universe can be determined by measuring the average density of matter within it, assuming that all matter is evenly distributed (rather than the distortions caused by 'dense' objects such as galaxies).

This assumption is justified by the observations that, while the universe is "weakly" inhomogeneous and anisotropic (see the large-scale structure of the cosmos), it is on average homogeneous and isotropic.

The homogeneous and isotropic universe allows for a spatial geometry with a constant curvature. One aspect of local geometry to emerge from General Relativity and the FLRW model is that the density parameter, Omega (Ω), is related to the curvature of space. Omega is the average density of the universe divided by the critical energy density, i.e. that required for the universe to be flat (zero curvature).

The curvature of space is a mathematical description of whether or not the Pythagorean theorem is valid for spatial coordinates. In the latter case, it provides an alternative formula for expressing local relationships between distances:

In the last two cases, the Pythagorean theorem is invalid (but discrepancies are only detectable in triangles whose sides' lengths are of cosmological scale).

If you measure the circumferences of circles of steadily larger diameters and divide the former by the latter, all three geometries give the value π for small enough diameters but the ratio departs from π for larger diameters unless Ω = 1:

Astronomical measurements of both matter-energy density of the universe and spacetime intervals using supernova events constrain the spatial curvature to be very close to zero, although they do not constrain its sign. This means that although the local geometries of spacetime are generated by the theory of relativity based on spacetime intervals, we can approximate 3-space by the familiar Euclidean geometry.

Under the assumption that the universe is homogeneous and isotropic, the curvature of the observable universe, or the local geometry, is described by one of the three "primitive" geometries (in mathematics these are called the model geometries):

Even if the universe is not exactly spatially flat, the spatial curvature is close enough to zero to place the radius at approximately the horizon of the observable universe or beyond.

Global geometry covers the geometry, in particular the topology, of the whole universe—both the observable universe and beyond. While the local geometry does not determine the global geometry completely, it does limit the possibilities, particularly a geometry of a constant curvature. For this discussion, the universe is taken to be a geodesic manifold, free of topological defects; relaxing either of these complicates the analysis considerably.

Two strongly overlapping investigations within the study of global geometry are whether the universe:

For a flat spatial geometry, the scale of any properties of the topology is arbitrary and may or may not be directly detectable. For spherical and hyperbolic spatial geometries, the curvature gives a scale (either by using the radius of curvature or its inverse), a fact noted by Carl Friedrich Gauss in an 1824 letter to Franz Taurinus.[6]

Analysis of data from WMAP implies that on the scale to the surface of last scattering, the density parameter of the Universe is within about 2% of the value representing spatial flatness.[7]

Compactness of the global shape

A compact space is a stronger condition: in the context of Riemannian manifolds, it is equivalent to being bounded and geodesically complete. If we assume that the universe is geodesically complete, then boundedness and compactness are equivalent (by the Hopf–Rinow theorem), and they are thus used interchangeably, if completeness is understood.

Compact geometries can be visualized by means of closed geodesics: on a sphere, a straight line, when extended far enough in the same direction, will reach the starting point.

If the geometry of the universe is not compact, then it is infinite in extent with infinite paths of constant direction that, generally do not return and the space has no definable volume, such as the Euclidean plane.

When cosmologists speak of the universe as being "open" or "closed", they most commonly are referring to whether the curvature is negative or positive. These meanings of open and closed, and the mathematical meanings, give rise to ambiguity because the terms can also refer to a closed manifold i.e. compact without boundary, not to be confused with a closed set. With the former definition, an "open universe" may either be an open manifold, i.e. one that is not compact and without boundary,[8] or a closed manifold, while a "closed universe" is necessarily a closed manifold.

In the Friedmann-Lemaître-Robertson-Walker (FLRW) model the universe is considered to be without boundaries, in which case "compact universe" could describe a universe that is a closed manifold.

The latest research shows that even the most powerful future experiments (like SKA, Planck..) will not be able to distinguish between flat, open and closed universe if the true value of cosmological curvature parameter is smaller than 10−4. If the true value of the cosmological curvature parameter is larger than 10−3 we will be able to distinguish between these three models even now.[9]

In a flat universe, all of the local curvature and local geometry is flat. It is generally assumed that it is described by a Euclidean space, although there are some spatial geometries that are flat and bounded in one or more directions (like the surface of a cylinder, for example).

The alternative two-dimensional spaces with a Euclidean metric are the cylinder and the Möbius strip, which are bounded in one direction but not the other, and the torus and Klein bottle, which are compact.

In three dimensions, there are 10 finite closed flat 3-manifolds, of which 6 are orientable and 4 are non-orientable. The most familiar is the 3-Torus. See the doughnut theory of the universe

A flat universe can have zero total energy and thus can come from nothing.[10][11]

A positively curved universe is described by spherical geometry, and can be thought of as a three-dimensional hypersphere, or some other spherical 3-manifold (such as the Poincaré dodecahedral space), all of which are quotients of the 3-sphere.

Analysis of data from the Wilkinson Microwave Anisotropy Probe (WMAP) looks for multiple "back-to-back" images of the distant universe in the cosmic microwave background radiation. It may be possible to observe multiple images of a given object, if the light it emits has had sufficient time to make one or more complete circuits of a bounded universe. Current results and analysis do not rule out a bounded global geometry (i.e. a closed universe), but they do confirm that the spatial curvature is small, just as the spatial curvature of the surface of the Earth is small compared to a horizon of a thousand kilometers or so. If the universe is bounded, this does not imply anything about the sign[citation needed] or zeroness of its curvature.

Based on analyses of the WMAP data, cosmologists during 2004–2006 focused on the Poincaré dodecahedral space (PDS), but horn topologies (which are hyperbolic) were also deemed compatible with the data. 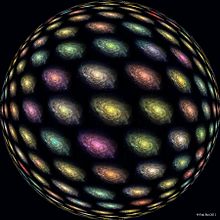 Universe in an expanding sphere. The galaxies furthest away are moving fastest and hence experience length contraction and so become smaller to an observer in the centre.

If the Universe is contained within an ever expanding sphere (which may have started from a single point), it can still appear infinite for all practical purposes. Because of length contraction the galaxies further away, which are travelling away from the observer the fastest, will appear smaller. In this way an infinite Universe fits within a finite sphere as long as the sphere is expanding continually. The question of whether the Universe is infinite can depend on the coordinate system used. For example, you could choose a coordinate system in which the galaxies are equally spaced out and don't have length contraction, in which case the Universe could be said to be infinite in size. Whichever galaxy the observer is on, the other galaxies moving away from it will appear length contracted. An observer can never get to the edge of the Universe if it is expanding at the speed of light. At the edge of the sphere matter becomes infinitely dense, but because it is moving away from the observer close to the speed of light due to time dilation its effect on the rest of the Universe is negligible. As the spherical Universe expands, matter that was near the edge is now in the middle of the sphere.

Various models have been proposed for the global geometry of the universe. In addition to the primitive geometries, these proposals include the: