The election resulted in gains for the incumbent Welsh Labour Party, which gained four seats compared to the previous election and now has 30 seats, exactly half of the Assembly. The party also secured a swing in its favour of over 10 percentage points. The Welsh Conservatives emerged as the largest opposition party with 14 seats, a net gain of two, but party leader Nick Bourne lost his seat. The junior party in the government coalition, the nationalist Plaid Cymru, suffered a drop in its vote and lost 4 seats. The Welsh Liberal Democrats lost significantly in the popular vote and returned five AMs, a loss of one.

British, Irish, Commonwealth and European Union citizens living in Wales aged eighteen or over on election day were entitled to vote. The deadline to register to vote in the election was midnight on 14 April 2011, though anyone who qualified as an anonymous elector had until midnight on 26 April 2011 to register.[2]

It was held on the same day as elections for Northern Ireland's 26 local councils, the Scottish Parliament and Northern Irish Assembly elections, a number of local elections in England and the United Kingdom Alternative Vote referendum.

In general elections for the National Assembly for Wales, each voter has two votes in a mixed member system. The first vote may be used to vote for a candidate to become the Assembly Member for the voter's constituency, elected by the first past the post system. The second vote may be used to vote for a regional closed party list of candidates. Additional member seats are allocated from the lists by the d'Hondt method, with constituency results being taken into account in the allocation. The overall result is approximately proportional. 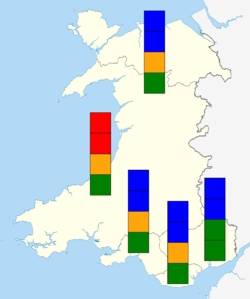 NB: candidates in BOLD text were the incumbent assembly members. Non incumbents are represented in italics. Members elected 2011 are highlighted with party colours.

Target seats for the main parties

Below are listed all the constituencies which require a swing of less than 7.5% from the 2007 result to change hands.

23 of the members elected to the Assembly in the election were not members of the previous Assembly.

On 17 May it was discovered that two of the newly-elected AMs, John Dixon and Aled Roberts, held posts which disqualified them from election to the Assembly. Although they had formally taken their seats at the first meeting on 11 May,[11] they were then removed from membership of Assembly.[12] Both resigned the posts which had given rise to the disqualification. After taking legal advice, the Presiding Officer Rosemary Butler was told that she must formally declare their seats vacant on Friday 27 May, which would mean the candidates placed second on the list being elected unless motions were tabled to reinstate the two.[13] Motions to reinstate Dixon and Roberts were subsequently tabled, and the Assembly Commission issued a press statement explaining the legal situation as they saw it.[14]

The Liberal Democrats withdrew the motion to reinstate John Dixon on 5 July 2011, after the assembly standards commissioner Gerard Elias QC made clear that he had failed to take notice of the relevant rules. On 6 July, Eluned Parrott was sworn in as an AM in his place, and the Assembly voted to readmit Aled Roberts, as evidence showed that he had been directed to out-of-date information in Welsh.[15]

8 incumbent AMs were defeated at the polls.

The following incumbent AMs did not offer themselves for re-election: