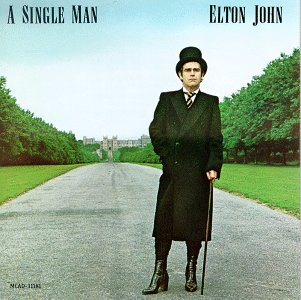 "A Single Man" is the twelfth by British , released in 1978, 2 years after his intended last album "", and 1 year after the release of "". It is the first album John created without his longtime . As was an unknown at the time, many people have misinterpreted the album's title to imply that Elton wrote the entire album himself.

The hit "Song for Guy" was a tribute to Guy Burchett, a young messenger who was killed in a motorcycle accident. The song was a near-global success, charting high everywhere except the United States and Canada, where Elton's label, MCA Records, didn't feel that it had hit potential, due to the recent success of "The Music Box Dancer".

The 1998 reissue has five bonus tracks, the first two being the 1978 flop-single "Ego", and its b-side "Flinstone Boy". The next two tracks are the b-sides of "Part-Time Love" and "Song for Guy" ("I Cry at Night" and "Lovesick" respectively), and the last track, "Strangers", originally b-side of his 1979 disco-album title track, "Victim of Love". Some releases of his 1980 album, "", also have "Strangers" as a bonus track.

The photo for the front cover was taken in the , which is part of in . It was also the first album without his glasses.

"A Single Man" was Elton's first album ever to be officially released in the former USSR, though his previous releases had been smuggled into the country in various forms. It was released following the success of his "A Single Man in Concert" shows in and , though it differed in two ways from its release elsewhere. First, the album was re-titled "Poyot Elton John" ["Elton John sings" in Russian] . Second, both "Big Dipper" and "Part-Time Love" were removed, due to the subject matter of the songs. Curiously, Elton had performed "Part-Time Love" at the USSR shows without objection from Soviet officials.

All songs by and , except where noted.