Battle of the Dukla Pass

Battle of the Dukla Pass 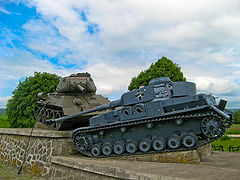 One of memorials of the Dukla Pass battle of 1944. This one commemorates a major tank battle in the Valley of Death

Battle of the Dukla Pass, also known as the Dukla / Carpatho-Dukla / Rzeszów-Dukla / Dukla-Prešov Offensive was the scene of bitterly contested battle for the Dukla Pass (borderland between Poland and Slovakia) on the Eastern Front of World War II between Nazi Germany and the Soviet Union in September-October 1944. German resistance was much harder than expected. The battle which began on 8 September would not see the Soviet forces on the other side of the pass until 6 October, and German forces would stop their heavy resistance in the region only around 10 October. Five days to Prešov turned into fifty days to Svidnik alone with over 70,000 casualties on both sides. Prešov that was to be reached in six days remained beyond the Czechoslovaks' grasp for four months.[2] The battle would be counted among one of the most bloody in the entire Eastern Front and in the history of Slovakia;[3] one of the valleys in the pass near villages of Kapisova, Chyrowa, Iwla and Głojsce would become known as the Valley of Death.[1]

In summer 1944, Slovaks rebelled against the Nazis and the Czechoslovak government appealed to Soviets for help. On 31 August, Soviet marshal Ivan Konev was ordered to prepare plans for an offensive to destroy Nazi forces in Slovakia. The plan was to push through the old Slovak-Polish border in the Carpathian Mountains via the Dukla Pass near Svidnik to penetrate into Slovakia proper.[4]

In the meantime, however, the Germans had fortified the region, forming the Karpatenfestung or Árpád line.

The Soviet operation plan called for the Soviet forces to cross the pass and capture the town of Prešov within five days.[5]

The operation started on 8 September. It took the Soviets three days to take Krosno (it was captured on 11 September). One of the biggest battles in the pass took place on and around Hill 534 in the northwest from the town of Dukla; the battle to capture this hill lasted from 10-20 September, and during that period the control of the hill changed more than 20 times.[5] The town of Dukla was seized on 21 September.[5] The area of the former Czechoslovakian state border—heavily fortified by the Germans—was captured on 6 October; it took almost a month for the Soviet forces to reach Slovakia.[5]

The Dukla operation did not end when the Soviets forced the pass. The combat zone shifted to Eastern Slovakia, with Soviet forces trying to outflank and push back the German forces, still strong and having many fortified positions. South of the pass and directly west of the village of Dobraslava lies an area which has come to be known as the "Valley of Death." Here Soviet and German armor clashed in a miniature reenactment of the great tank battle of Kursk.[1] Soviet and Czechoslovak forces would enter Svidnik on 28 October.[1] A major German fortified position near the pass, Hill 532 "Obšár", would be secured as late as on 25 November 1944.[5] 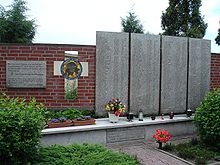 The German 97th Jäger Division Memorial to the Victims of Wars, Krzanowice 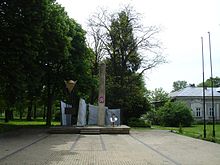 The Czechoslovak soldiers Memorial to the Victims of Wars 1944, Nowosielce Sanok County

The Slovak National Uprising was mostly crushed by the time Soviet units secured Slovak territories; one of the main reasons for it was that the German resistance in the Dukla Pass was much heavier than expected. Another factor was that the Slovak insurgent forces failed to secure the other side of the pass, as planned by the Slovak and Soviet commanders during early preparations.[4]

The Soviet delay and eventual failure in providing support for the insurgents led to the accusations that it was deliberate, just as in the case of the Warsaw Uprising—that Joseph Stalin wanted to weaken the Czechoslovak forces to facilitate the eventual Soviet takeover of that country.[1]

In 1949, the Czechoslovak government erected a memorial and cemetery southeast of the Dukla border crossing, in Vysny Komarnik, Slovakia's first liberated village. It contains the graves of several hundred Russian and Czechoslovak soldiers. Several other memorials and cemeteries have also been erected in the region.[4]