In 1946, Raiford was one of only six black men recruited by a then all white Greensboro Police Department. Although the tall and muscular man was proud to be a pioneering member of law enforcement, Raiford resented the way he and his fellow black officers were treated in a city that was then one of the more populated incorporated areas in the Tarheel state. The officers were not allowed to arrest anyone outside their ethnicity.

"I had to wear rejects," Raiford told his daughter, former television personality Sharon Crews during an interview for ABC News. "I had to wear pants another officer had been wearing for two years. They were shiny. They didn't fit." [2] Things were not any better in the North and Midwest.

"Officers had to patrol areas with "colored police" billboarded on their cars," said Elsie Scott, former Executive Director of the National Organization of Black Law Enforcement Executives. "That was to let people know that he could only police black people. Integrating police departments during and after World War II was a huge controversy."

In Philadelphia, Pennsylvania, people threatened to riot when black officers were hired; some even attacked them.

In Detroit, Michigan, plans to hire black officers were scrapped when the entire city police force threatened to strike. It was not until the mid-1950s when Atlanta, Georgia, integrated its police force. Major compromises had to be reached. Black officers were not allowed to wear their uniforms back and forth to work. They had to dress at Atlanta's black YMCA.

"They even built a second bathroom down in the cold and rat-infested basement of city hall because we were considered less than human, said Raiford, who was a star athlete with a college degree under his belt. "It took a special man to take that."

Life for America's first black police officers was not easy. For Raiford, the tension and humiliation became too much to bear. After a five-year tour of duty, Raiford traded his badge for a rundown schoolhouse for black children located in a remote area of Guilford County called Goodwill. A defunct book titled "Hiawatha, the Warrior," was compulsory reading for all of the first through twelfth graders he taught.

Although Raiford's days of patrolling the streets of Greensboro had come to an end in 1951, his commitment to improving the lives of those disenfranchised by Jim Crow was just beginning. [3]

During the heart of the Great Depression, (1920 to 1940), the average hourly wage for an African-American man was a single dime. "A man who made a dollar a day was doing well," said Raiford, who earned his salary in the late 1920s playing baseball for semi-pro teams throughout the South.

In the early 1930s, Raiford (6'3") was recruited to play for the New York Cuban Giants.[citation needed] It was the so-called decade of Negro League baseball, when men such as Satchel Paige, Josh Gibson and Buck Leonard became household names, even in parts of White America. Raiford became a mentor to ensuing young athletes, including tennis player Arthur Ashe, the first African-American male to win a Grand Slam event. Raiford took the quiet teenager under his wing and schooled him on how to earn respect.

For Raiford, respect was hard to come by, even for a hero in his own hometown. Once as a police officer, Raiford offered to play for the Greensboro Patriots in a benefit game for polio victims. It did not matter that Raiford was a star athlete who played for large crowds; he was turned down flat. "That was the final insult," said Raiford, who never played baseball again.

Raiford went on to become a human rights activist, a Greensboro City Council member, Commissioner of the Greensboro Parks and Recreation Department and the North Carolina Goodwill Ambassador for the 1972 Summer Olympics in Munich, West Germany.

When the United States entered World War II in 1941, Raiford was authorized to aid military personnel and engage in voluntary rescue missions for the American Red Cross.[5]

Raiford was a key player during the turbulent civil rights movement of the 1960s by becoming one of Greensboro's two African-American bail bondsmen. Raiford freed then A&T student body president Jesse Jackson after Jackson's first arrest following a protest march in 1963. Jackson and other activists, like Ezelle Blair and Joseph McNeil, committed to memory Raiford's home phone number.

When a targeted Jackson began facing a higher bail and stiffer sentence, Raiford often got the peaceful protestor out of jail on credit to continue the South's expanding Freedom Movement.[2] [6] [7]

In the wake of Dr. Martin Luther King, Jr's assassination in Memphis, Tennessee, on April 4, 1968, the State of North Carolina enforced a strict curfew that made it illegal for all civilians to leave their homes after 8:00 p.m. 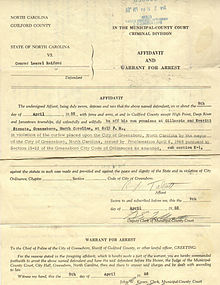 It was on the evening of April 9, 1968, when Raiford dropped off a couple of just-freed A&T students and was returning home when the mandated curfew caught up with him. Raiford, now age 61, said he glanced at his watch, quietly exited his car, sensing something was not right. Raiford said he attempted to continue stealthily on foot, hoping the darkness of a neighborhood park would protect him.

Once he cleared the brush, Raiford said he was ambushed by four angry police officers who did not care that Raiford was a recognized lawman. Raiford was arrested with force and arms; he spent the night behind bars, fighting for the rights of others.[2]

"There's no doubt that we had some tension in Greensboro that was uncontrollable," said then Mayor Carson Bain. "This was a dramatic period in our history. This was a turning point in American history."[8]

Raiford attended North Carolina Agricultural and Technical State University (A&T), where he lettered in football, track, baseball and swimming. Raiford graduated in 1936 with a bachelor of science degree in biology and was inducted into A&T's Sports Hall of Fame in 1971.[2]