Hursley is a village and civil parish in Hampshire, England with a population of around 800 [1] in 2005. It is located roughly mid-way between Romsey and Winchester on the A3090. Besides the village the parish includes the hamlets of Standon and Pitt. 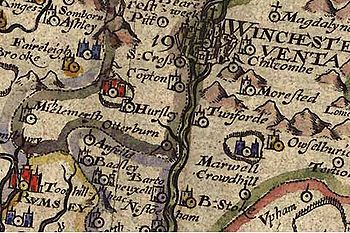 The earliest references to Hursley date from the late 12th century; Bishop of Winchester Henry de Blois built a manor house called Merdon Castle, within the parish, in 1138 [2]. Hursley continued in the ownership of the Bishop of Winchester until 1552 when it was surrendered to king Edward VI.

The buildings had become ruinous by the 16th century, when Edward Vl granted the manor and park at Hursley to Sir Philip Hoby. Some remains, notably of a gatehouse, still stand, much overgrown, and are listed as a building at risk.[3]

During the reign of Queen Mary the manor was briefly restored to the church but given back to the Hoby family by Elizabeth I.

The Hoby family sold the manor and castle to Thomas Clerke in 1600. The lodge and park at Hursley were leased separately at this time, but the two estates were brought together again in 1630.

The estate passed into the Cromwell family in 1643 when Oliver Cromwell's son Richard married Dorothy Major, daughter of the owner, Richard Major.

Richard Cromwell lived with his wife in Hursley from 1649 until 1658 when he was proclaimed Lord Protector of the Realm following the death of his father. This made Hursley briefly the country seat of the ruler of England. It was not to last however as Richard's grip on power was weak, he was forced from office within months and by 1660 concerns for his safety forced Richard Cromwell to flee the country with Dorothy. They travelled first to France and then to other parts of Europe where Richard lived under an assumed name. Richard's son Oliver Cromwell II(??-1705) took over the Hursley estate, and the tenants claimed their ancient rights and customs (including pastureage and felling trees) in a lengthy legal battle.

Richard returned to Hursley after Oliver died in 1705 and lived on as lord of the manor until he died in 1712 whereupon he was buried in the chancel of All Saints' Church, Hursley [4]. Richard's daughters sold Hursley estate to Sir William Heathcote, baronet for £35,100 in 1718.

William Heathcote was a successful merchant who moved to Hursley in order to take up the role of a country gentleman. Between the years of 1721 and 1724 William built a red brick, Queen Anne style mansion now known as Hursley House on the site of the original hunting lodge (Hursley House is now owned by IBM as part of IBM Hursley Laboratories)

William died in 1751 and the estate passed to his son, Sir Thomas Heathcote. About this time Hursley's original Medieval Parish Church was rebuilt in a Georgian style.

Sir Thomas was married twice and had eight children.

When he died he was succeeded by the second Sir William. William's son, also called Sir Thomas Heathcote, was a patron of the arts and modernised Hursley House, but was blamed by later Heathcotes for property blunders that eventually cost the family the estate.

William Heathcote, nephew to Thomas, became the fifth baronet in 1825. He extended Hursley House and also created Home Farm on the site of the old Merdon Castle.

William was married twice, first to Caroline who bore him three sons and a daughter but died in 1835, and second to Selina in 1841 by whom he had another eight children.

In 1888 Selina Heathcote sold the estate for £150,000 to Joseph Baxendale, the owner of Pickfords, after her husband's death.

The Church of England theologian and poet John Keble was appointed Vicar of Hursley in 1835, rebuilt the church in 1848, and remained there until his death in 1866. Keble was Professor of Poetry at Oxford University from 1831 to 1841, and was the originator and subsequently one of the leaders of the Oxford Movement. Keble College, Oxford was founded in his memory. Keble is buried at All Saint's Church, Hursley. 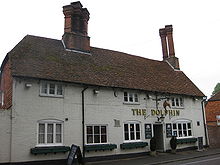 IBM has a site at Hursley, centred around Hursley House, employing over 1500 people. It is nowadays primarily a software development laboratory, specializing in transaction and message processing (CICS, MQ), Information Management, Java, and decimal arithmetic. Storage adapters and storage virtualisation products (SVC) are also developed on this site. In the past it was the development laboratory for several IBM 360 models and the first digital colour display, the IBM 3279 terminal. Hursley is crossed by the Monarch's Way long distance footpath.

Hursley village is situated on the chalk at the northern edge of the Palaeogene deposits of the Hampshire Basin; the chalk is largely overlain by head and 'clay with flints', insoluble material concentrated out of dissolved chalk. A number of dry valleys converge from the north. Immediately to the south of the village lies a belt of Palaeocene sandy clays of the Lambeth Group, sloping up to a ridge of Eocene clays and sandstones of the London Clay, Nursling and Whitecliff sands at Ladwell.[2] 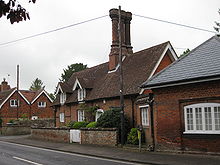 Cottages in Hursley with distinctive chimneys