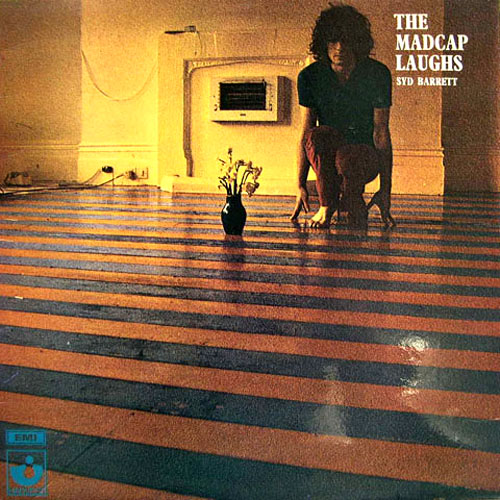 "The Madcap Laughs" was 's first solo album after being replaced in by his old school friend . After leaving his parent group, Barrett began recording sessions with former Pink Floyd-turned-Syd Barrett manager in May 1968. Although the sessions were brief, and they produced some fine material, the project was abandoned for almost a year while Barrett spent much of the year as a recluse.

In April 1969, Malcolm Jones took over the project and Barrett began working on newer material, while reworking the 1968 recordings. Session musicians, namely, members of The Soft Machine, as well as drummer were also called in to augment Barrett's songs. It is still a mystery why Jones abandoned production responsibilities, at the end of May, so soon after having assumed them. "The Making of the Madcap Laughs" Jones recollections of the sessions, show that he and Barrett got on well together and had in fact completed half of the album before the new producers took over.
and David Gilmour were in the process of completing Pink Floyd's ambitious "" album when they got involved with "The Madcap Laughs" that July and helped Barrett finish his album, "in a two-day sprint" according to Rick Sanders author of "Pink Floyd" (Futura Publications, 1976). .

The album featured a rather unorthodox recording process, in which Syd would provide a backing track of his own singing accompanied by acoustic guitar, over which the session musicians would overdub the rest of the arrangement. However, Syd's playing and singing were highly erratic and unpredictable--he skipped or added beats and bars seemingly at random, or otherwise he would strum on a single chord for a long time before unexpectedly reverting back to the main portion of the song. This was all much to the frustration of the session musicians; a close listen to several tracks [in particular "No Good Trying" and "Love You"] will reveal the backing band hovering uncertainly here, or being caught off-guard by a chord change there. (During an interview, recounted that musicians would ask "What key is that in, Syd?" and Barrett would reply "Yeah", or "That's funny") Syd would not allow the musicians to rehearse or re-record their overdubs, insisting that they sounded fine. After several months of intermittent recording, the album was finally deemed complete.

"Octopus" was released as a single in November 1969 and the album itself followed in January 1970. It reached #40 in the UK at the time [ [http://www.chartstats.com/artistinfo.php?id=11125 UK Charts] ] and was fairly well-reviewed.Fact|date=December 2007

All songs by Syd Barrett, except where noted.

*In 1993, "The Madcap Laughs" was reissued with several bonus tracks of alternate takes. See "" for track details.

*The nude woman appearing on the inside record sleeve was Syd Barrett's girlfriend who was part and known as Iggy The Eskimo. [ cite web | title= The Mick Rock Photo Sessions | publisher= Julian Palacios | url= http://www.geocities.com/Vienna/Strasse/2724/mickrock.html | accessdate= 2007-09-23 ] "When I arrived for 'The Madcap Laughs' photo session, Syd was still in his underpants... His lady friend of two weeks, 'Iggy the Eskimo' was naked in the kitchen..." [ cite web | title= Mick Rock quoted by Bonita Lee (August 1999)| publisher= Peter Houweling | url= http://utopia.knoware.nl/users/ptr/pfloyd/news/hhh.html | accessdate= 2007-09-23 ]

*Joe Boyd (producer of "Arnold Layne") had been looking for a follow up to the Purple Gang's "Granny Takes a Trip" single and asked Syd for a tape of his songs - "Boom Tune" (aka "Here I Go") was one on it the group were going to do, but unfortunately it never happened and the tape was lost ("White Bicycles", Joe Boyd)