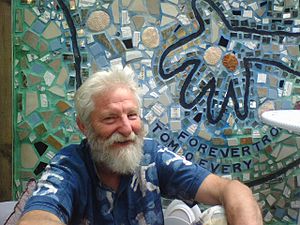 Isaiah Zagar in his Magic Garden on South Street.

Isaiah Zagar (born 1939) is a Philadelphia mosaic artist. He is notable for his murals which are primarily in or around Philadelphia's South Street.

Zagar received his Bachelor of Art from the Pratt Institute in Brooklyn, New York City.[1] In 1968, after serving in the Peace Corps for three years in Peru, Zagar and his wife, Julia, moved to South Philadelphia where they opened the Latin American shop The Eyes Gallery on South Street.[2] In December 1968, the Eyes Gallery was the site of Zagar's first mosaic, Zagar mosaiced it as a way to create a folk art environment for the art they were selling. 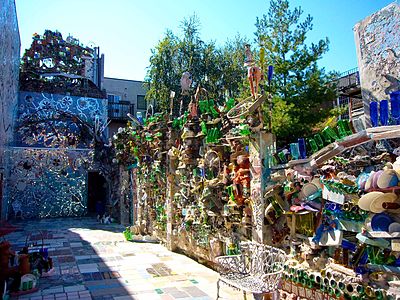 Philadelphia's Magic Gardens, Zagar's largest South Street mosaic work, is an indoor/outdoor maze of mosaics inlaid with various pieces of poetry. One line reads, "I built this sanctuary to be inhabited by my ideas and my fantasies." Another says, "Remember walking around in this work of fiction."

In 1959 when I was 19 years old I was introduced to the folk art environment of Clarence Schmidt, My Mirrored Hope, Woodstock, New York, USA. Soon after in 1961 there was a groundbreaking exhibition at The Museum of Modern Art, in New York City called The Art of Assemblage. Because that exhibition included assemblages of artists like Pablo Picasso, Jean Dubuffet, Kurt Schwitters, Antonio Gaudi alongside of untrained brickaleurs Clarence Schmidt, Simon Rodia and Joseph Ferdinand Cheval that gave me as a trained artist the rationale to include their concepts as manifestations of fine art. At a crucial time in my life it allowed me to begin what could be called a life's work making the city of Philadelphia, Pennsylvania into a labyrinthine mosaic museum that incorporates all my varied knowledge and skills.[3]

In 2002 the owner of the two vacant lots on which Zagar built The Magic Gardens demanded he buy the property for $300,000 or he would have it demolished.[4] Through fund raising, private donations, and taking out a loan, Zagar was able to buy the property,[5] which now works as the nonprofit organization, Philadelphia's Magic Gardens.

From 1991 to 1999 Zagar mosaiced the five-sided Painted Bride Arts Center on Vine and 2nd Street in Philadelphia. This space often hosts performances by The Philadelphia Dance Company. The mosaic itself is entitled "The Skin of the Bride."[6]

Zagar continues to create mosaic murals in Philadelphia, mainly around the South Street area. To date he has completed over 130 of these murals. He hosts a weekend workshop during the last weekend of each month where participants can assist him in creating a new mural in the community. Much of Zagar's work is completed free of charge or is commissioned by businesses or people in the area. A walking tour is available from Philadelphia's Magic Gardens which takes visitors to 20 of these mosaic murals.[7]