Dijon
This article is about the French city. For other uses, see Dijon (disambiguation).

listen)) is a city in eastern France, the capital of the Côte-d'Or département and of the Burgundy region.

Dijon began as a Roman settlement called Divio, located on the road from Lyon to Paris. Saint Benignus, the city's patron saint, is said to have introduced Christianity to the area before being martyred.

Capital of the Duchy of Burgundy

This province was home to the Dukes of Burgundy from the early 11th until the late 15th centuries and Dijon was a place of tremendous wealth and power and one of the great European centres of art, learning and science. The Duchy of Burgundy was a key in the transformation of medieval times toward early modern Europe.

It was occupied by Nazi Germany between June 1940 and 12 September 1944, when it was liberated by joint French/UK/US forces.[1]

Dijon boasts a large number of churches, notably Notre Dame de Dijon, St. Philibert, St. Michel, Dijon Cathedral, the crypt of which, dedicated to Saint Benignus, dates from 1,000 years ago. The city has retained varied architectural styles from many of the main periods of the past millennium, including Capetian, Gothic and Renaissance. Many still-inhabited town houses in the city's central district date from the 18th century and earlier. 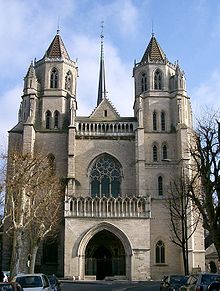 Dijon architecture is distinguished by, among other things, toits bourguignons (Burgundian polychrome roofs) made of tiles glazed in terracotta, green, yellow and black and arranged in eye-catching geometric patterns.

Dijon was largely spared the destruction of wars such as the 1870 Franco-Prussian War and the Second World War, despite the city being occupied. Therefore, many of the old buildings such as the half-timbered houses dating from the 12th to the 15th centuries (found mainly in the city's core district) are undamaged, at least by organized violence.

Dijon is home to many museums, including the Musée des Beaux-Arts de Dijon in part of the Ducal Palace (see below). It contains, among other things, ducal kitchens dating back to the mid-15th century, and a substantial collection of European painting from Roman times through contemporary art.

The church of Notre Dame is famous for both its art and architecture. Popular legend has it that one of its stone relief sculptures, an owl (la chouette) is a good-luck charm: visitors to the church touch the owl with their left hands to make a wish. (The current carving was restored after it was damaged by vandalism in the night of 5 and 6 January 2001). 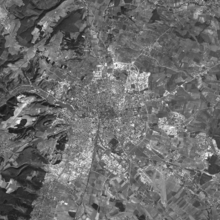 Dijon is located approximately 300 km (190 mi) southeast of Paris, which takes about three hours by car along the motorways A38 and A6. The A31 provides connections to Nancy, Lille and Lyon. The A39 connects Dijon with Bourg-en-Bresse and Geneva, the A36 with Mulhouse and Basel.

The Gare de Dijon-Ville is the main railway station, providing connection in one hour and 40 minutes by the TGV high-speed train (LGV Sud-Est) to Paris-Gare de Lyon. For comparison, Lyon is 180 km (110 mi) away and two hours distant – although there is no high-speed train link between both cities. Nice takes about six hours by TGV and Strasbourg about three hours at regular train speed. Lausanne in Switzerland is less than 150 km (93 mi) away or two hours by train. Several regional trains of TER Bourgogne depart from the station.

A new tram network is under construction in Dijon; it is expected to open in 2012.[2]

To the northwest of Dijon, the race track of Dijon-Prenois hosts various motor sport events. It hosted the Formula 1 French Grand Prix on five occasions from 1974 to 1984.

Dijon is home to Dijon FCO, a Football team in Ligue 1 .Dijon has its own basketball club (Pro A), JDA Dijon Basket.

Dijon is home to the Dijon Ducs ice hockey team, who play in the Magnus League.[3]

Dijon holds its International and Gastronomic Fair every year in autumn. With over 500 exhibitors and 200,000 visitors every year, it is one of the ten most important fairs in France. Dijon is also home, every three years, to the international flower show Florissimo.

Dijon has numerous museums such as the Musée des Beaux-Arts de Dijon, the Musée Archéologique, the Musée de la Vie Bourguignonne, the Musée d'Art Sacré, and the Musée Magnin. It also contains approximately 700 hectares of parks and green space, including the Jardin botanique de l'Arquebuse.

Apart from the numerous bars, which sometimes have live bands, some popular music venues in Dijon are : Le zenith de Dijon, La Vapeur and l'Atheneum.

Dijon is famous for its mustard: the term Dijon mustard (moutarde de Dijon) designates a method of making a particularly strong mustard relish. This is not necessarily produced near Dijon, as the term is regarded as genericized under European Union law, so that it cannot be registered for protected designation of origin status.[4] Most Dijon mustard (brands such as Amora or Maille) is produced industrially and over 90% of mustard seed used in local production is imported, mainly from Canada. In 2008, Unilever closed its Amora mustard factory in Dijon. Dijon mustard shops also feature exotic or unusually-flavored mustard (fruit-flavoured, for example), often sold in decorative hand-painted faience (china) pots.

As the capital of the Burgundy region, Dijon reigns over some of the best wine country in the world. Many superb vineyards producing vins d'appellation contrôlée, such as Vosne-Romanée and Gevrey-Chambertin, are within 20 minutes of the city center. The town's university boasts a renowned oenology institute. The road from Santenay to Dijon, known as the route des Grands Crus, passes through an idyllic countryside of vineyards, rivers, villages, forests, and 12th century churches.

Dijon is twinned with: