The Treasure of the Sierra Madre (film)

The Treasure of the Sierra Madre (film)

Infobox Film
name = The Treasure of the Sierra Madre 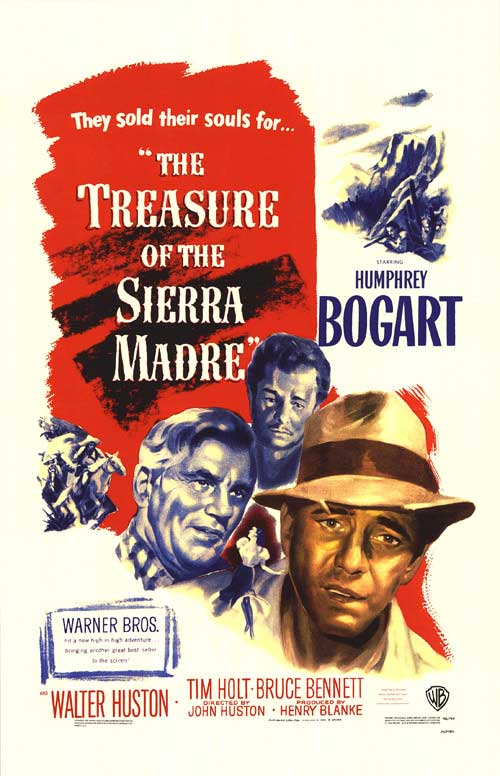 "The Treasure of the Sierra Madre" is 's 1948 adaptation of 's 1927 novel of the same name, in which two American down-and-outers ( and ) in 1920s hook up with an old-timer (, the director's father) to prospect for . The old-timer accurately predicts trouble, but is willing to go anyway. "The Treasure of the Sierra Madre" was one of the first films to be shot almost entirely on location outside the (in , Mexico), although the night scenes were filmed back in the studio. The film is quite faithful to the novel.

By the the violence of the had largely subsided, although scattered gangs of bandits continued to terrorize the countryside. The newly established post-revolution government relied on the effective, but ruthless, Federal Police, commonly known as the "", to patrol remote areas and dispose of the bandits. Foreigners, like the three American prospectors who are the protagonists in the story, were at very real risk of being killed by the bandits if their paths crossed. The bandits, likewise, were given little more than a "last " by the army units after capture, even having to dig their own graves first. This is the context in which the three s band together in a small Mexican town and set out to strike it rich in the remote mountains. They ride a train into the hinterlands, surviving a bandit attack enroute. Once out in the desert, Howard, the old-timer of the group, quickly proves to be by far the toughest and most knowledgeable; he is the one to discover the gold they are seeking. A mine is dug, and much gold is extracted, but greed soon sets in and Dobbs (Humphrey Bogart) begins to lose both his trust and his mind, lusting to possess the entire treasure. The bandits then reappear, pretending, very crudely, to be Federales, which leads to the now-iconic line about not needing to show any "stinking badges". After a gunfight, a real troop of Federales appear and drive the bandits away. But when Howard is called away to assist some local villagers, Dobbs and third partner Curtin have a final confrontation, which Dobbs wins, leaving Curtin lying shot and bleeding. However, as he staggers away through the desert, Dobbs is found and killed by some surviving bandits, who, in their ignorance, scatter the gold to the winds. Curtin is discovered and taken to Howard's village, where he recovers. He and Howard witness the bandits' execution by Federales, and learn that the gold is gone. They part ways, Howard returning to his village, and Curtin returning home to America.

A few notable uncredited actors appear in the film. In an opening cameo, director is pestered for money by Bogart's character. Actor Robert Blake also appears as a young boy selling lottery tickets. However, the most controversial cameo is . Sheridan, who was in Mexico at the time, allegedly did a cameo as a streetwalker. After Dobbs leaves the barbershop in , he spies a passing prostitute who returns his look. Seconds later, the woman is picked up again but this time in the distance. Some film goers and critics feel the woman looks nothing like Sheridan, but the DVD commentary for the film states that it is she. Many film internet sources, including , credit Sheridan for the part.

Co-star Tim Holt's father, Jack Holt, a star of silent and early sound Westerns and action films, makes a one-line appearance at the beginning of the film as one of the men down on their luck.

, who plays a key role as a rival prospector, had portrayed in 's own 1935 film version, under Bennett's birth name of .

The film is the origin of a famous line, often misquoted as "We don't need no stinking badges!" (homaged in ' "", also a Warner Bros. film). The correct dialogue is:

:Gold Hat (): We are Federales... you know, the mounted police.:Dobbs (Bogart): If you're the police, where are your badges?:Gold Hat (Alfonso Bedoya): Cquote|Badges? We ain't got no badges. We don't need no badges! I don't have to show you any stinkin' badges!

John Huston won the and in 1948 for his work on "The Treasure of the Sierra Madre". Walter Huston, John Huston's father, also won the for his role in this film, the first father-son win. The film was nominated for the Best Picture award, but lost to 's film adaptation of "Hamlet".

In 1990, this film was selected for preservation in the by the as being "culturally, historically, or aesthetically significant".