Châlons-en-Champagne (French pronunciation: [ʃa.lɔ̃.ɑ̃.ʃɑ̃.paɲ]) is a city in France. It is the capital of both the department of Marne and the region of Champagne-Ardenne, despite being only a quarter the size of the city of Reims.

Formerly called Châlons-sur-Marne, the city was officially renamed in 1998. It should not be confused with the Burgundian town of Chalon-sur-Saône.

Châlons is conjectured to be the site of the Catalaunian Fields in which the battle of Châlons, 451AD, turned back the westward advance of Attila. 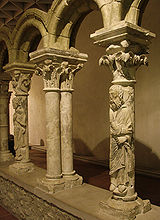 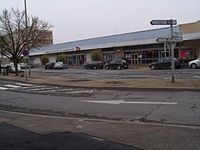 The Gare de Châlons-en-Champagne railway station is served by the TGV network with service to and from Paris Gare de l'Est. Other destinations are Reims, Saint-Dizier, Nancy, Bar-le-Duc and Verdun. Additionally, Châlons is connected with the Champagne-TGV station, near Reims, with high speed trains going to Lille, Nantes, Rennes and Paris-Charles de Gaulle Airport.

Châlons is located at the intersection of two major axes:

Châlons is also served by an international airport devoted to shipping (Châlons Vatry Airport [1]), ranking third in France with almost 60,000 tonnes of freight passing through each year. 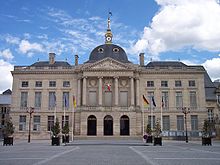 ESPE Basket Châlons-en-Champagne is a Châlons' basketball team. A temporary firing range was used for some shooting events at the 1924 Summer Olympics in Paris.[1]

Châlons-en-Champagne is twinned with:

The Camp de Mourmelon (formerly known as Camp de Châlons) is a military camp of circa 10,000 hectares located near Mourmelon-le-Grand 22 km north. It was created at the behest of Napoleon III and opened 30 August 1857 during the Second French Empire.

The initial purpose was simply for practising military manoeuvres, but it quickly turned into a showcase of the French Imperial Army, a theatrical propaganda display, where French citizens could meet the army and watch parades. Each year the camp was transformed into a town of tents and wooden chalets.[4]

The camp survived the fall of the Second Empire in 1870, but changed into a training camp and a departure point for troops engaging in overseas operations.

The camp is used for military manoeuvres, and cavalry training, along with the neighbouring, 2,500 hectare, Camp de Moronvillers. Firing of live ordnance (rockets, missiles) is prohibited.

Châlons-en-Champagne was the birthplace of:

Châlons-en-Champagne was the death location of:

British comedian Eddie Izzard mentions Châlons-en-Champagne (at the time known as Châlons-sur-Marne) on his stand-up album Definite Article, as part of a routine in which he tells of his school exchange trip to Châlons-sur-Marne, one of the highlights of which was a visit to a glue factory.

After being defeated by the Red Baron, Snoopy crawls past a sign for Chalons Sur Marne, in the classic, It's the Great Pumpkin Charlie Brown.