Exxon
This article is about the fuel brand. For the current corporate entity, see ExxonMobil. For the unrelated genetic term, see Exon. 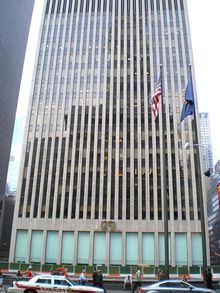 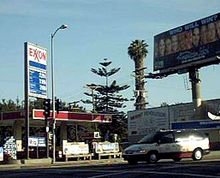 Exxon is a chain of gas stations as well as a brand of motor fuel and related products by ExxonMobil. From 1972 to 1999, Exxon was the corporate name of the company previously known as Standard Oil Company of New Jersey or Jersey Standard.

Exxon formally replaced the Esso, Enco, and Humble brands in the United States on January 1, 1973. The Esso name was a trademark of Jersey Standard Oil, and attracted protests from other Standard Oil spinoffs because of its similarity to the name of the parent company, Standard Oil. As a result, Jersey Standard was restricted from using Esso in the U.S., except in those states awarded to it in the 1911 Standard Oil antitrust settlement.

In states where it was restricted from using the Esso name, the company marketed under the Humble or Enco brands. The Humble brand was used at Texas stations for decades, as those operations were under the direction of Jersey Standard affiliate Humble Oil & Refining Company. In the middle to late 1950s, use of the Humble brand spread to other southwestern states, including Arizona, New Mexico, and Oklahoma.

In 1959, Jersey Standard gained full control of Humble Oil and restructured it into its U.S. marketing and refining division, to market nationwide under the Enco, Esso and Humble brands. Enco was created as an abbreviation of the phrase "ENergy COmpany." Humble introduced the Enco brand in 1960 in Oklahoma and surrounding states, to replace Humble's subsidiary Oklahoma and Pate brands. Humble also tried marketing under Enco in Ohio, but Standard Oil Company of Ohio (Sohio) protested that the Enco name and logo (a white oval with blue border and red lettering) too closely resembled that of Esso. Consequently, stations in Ohio were rebranded as Humble, and remained so until the Exxon brand came into use.

After the Enco brand was discontinued in Ohio, it was moved to other non-Esso states. In 1961, Humble stations in Arizona, New Mexico, Oklahoma and Texas were rebranded to Enco. That same year, Enco appeared on former Carter stations in the Midwest and the Pacific Northwest.

In 1963, Humble Oil and Tidewater Oil Company began negotiating a sale of Tidewater's West Coast refining and marketing operations. The sale would have given Humble Oil a large number of existing Flying A stations and distributorships, as well as a refinery in California, the nation's fastest-growing gasoline market. However, the Justice Department objected to the sale on anti-trust grounds. (In 1966, Phillips Petroleum Company bought Tidewater's western properties and rebranded all Flying A outlets to Phillips 66.)

In 1966, the U.S. Justice Department ordered Humble Oil to "cease and desist" from using the Esso brand at stations in several southeastern states, following protests from Standard Oil of Kentucky (Kyso), which was a Standard of California subsidiary in the process of rebranding its Standard stations to Chevron. By 1967, Humble Oil's Esso stations in the Southeast were rebranded to Enco.

In the 1960s and early 1970s, Humble Oil continued to have difficulties promoting itself as a nationwide marketer of petroleum products, despite a number of high-profile marketing strategies. These included the popular "Put a Tiger in Your Tank" advertising campaign and accompanying tiger mascot, introduced in 1959[1] to promote Enco Extra and Esso Extra gasolines. Humble Oil also used similar logotypes, use of the Humble name in all Enco and Esso advertising, and uniform designs for all stations regardless of brand. In addition, Humble Oil was a major promoter and broadcast sponsor for college football in the Pacific-8 (now Pac-12) and Southwestern conferences.

But Humble Oil still faced stiff competition from such national brands such as Shell and Texaco, which at that time was the only company to market under one brand name in all 50 states. By the late 1960s, Humble officials realized that the time had come to develop a new brand name that could be used nationwide.

At first, consideration was given to simply rebranding all stations as Enco, but that was shelved when it was learned that the word "Enco" is similar in pronunciation to a Japanese term for "stalled car." [2]

In 1972, Exxon was unveiled as the new, unified brand name for all former Enco and Esso outlets. At the same time, the company changed its corporate name from Standard Oil of New Jersey to Exxon Corporation. The rebranding came after successful test-marketing of the Exxon name, under two experimental logos, in the fall and winter of 1971-72. Along with the new name, Exxon settled on a rectangular logo using red lettering and blue trim on a white background, similar to the familiar color scheme on the old Enco and Esso logos.

The company initially planned to change its name to "Exon," in keeping with the four-letter format of Enco and Esso. However, during the planning process, it was noted that James Exon was the governor of Nebraska. Renaming the company after a sitting governor seemed ill-advised, and the second "x" was added to the new name and logo.

The unrestricted international use of the popular Esso brand prompted Exxon to continue using it outside the U.S. Esso is the only widely used Standard Oil descendant brand left in existence. Others, such as Chevron, maintain a few Standard-branded stations in specific states in order to retain their trademarks and prevent others from using them.

In 1989 Exxon announced that it was moving its headquarters and around 300 employees from Manhattan, New York City to the Las Colinas area of Irving, Texas. Exxon sold the Exxon Building (1251 Avenue of the Americas), its former headquarters in Rockefeller Center, to a unit of Mitsui Real Estate Development Co. Ltd. in 1986 for $610 million. John Walsh, president of Exxon subsidiary Friendswood Development Company, stated that Exxon left New York because the costs were too high.[3]

The rectangular Exxon logo, with the blue strip at the bottom and red lettering with the two interlinked 'X's, was designed by noted industrial stylist Raymond Loewy. The interlinked 'X's are incorporated in the modern-day ExxonMobil corporate logo, but the original Exxon logo continues for marketing and station signage.

In 1985 Minolta introduced a new autofocus SLR camera system named "Maxxum" in the United States. Originally, cameras such as the Maxxum 7000, lenses and flashes used a logo with a crossed 'XX' in 'MAXXUM'.[4] Exxon considered this a violation of their trademark, and as a result, Minolta was allowed to distribute cameras already produced, but was forced to change the stylistic 'XX' and implement this as a change in new production.[5]